It’s hard to keep track of all of the ongoing investigations into the Trump campaign and administration. At the very least, we know of inquiries by special counsel Robert Mueller and the FBI under the auspices of the Justice Department and by four separate congressional committees: the House and Senate Intelligence Committees, the House Oversight Committee, and the Senate Judiciary Committee. That’s a lot of investigating.

Is there really a need for so much redundancy? The answer is very likely yes, for several reasons. First, they’re after different things. The special counsel’s remit is to look into any potential violations of law. This is an important task, to be sure, but a limited one—lots of things may be deeply worrying even if not illegal. Congressional committees, on the other hand, have a much broader scope for their inquiries: they can look into anything within their jurisdiction that affects the public interest. They can do so with an eye toward impeachment, passing legislation, adjusting appropriations, confirming or refusing to confirm nominees, or engaging broadly in oversight of the executive branch.

Second, the different sorts of investigators have different competencies and modi operandi. The special counsel will tend to work in secret, reviewing evidence and interviewing witnesses, with only the occasional public pronouncement. Congressional committees work differently: the norm for most committees is open hearings, with cameras rolling. This means that one of their most important functions is releasing information—informing the public in an attempt to shape public discourse in certain ways. Of course, the Intelligence Committees are different—most of their hearings are closed. But they do also hold open hearings, and indeed it was reported that former FBI Director James Comey specified that he wanted to testify before the Senate Intelligence Committee in open hearings.

The members and staff of the Intelligence Committees have significant substantive expertise on intelligence matters and are likely to focus their investigation there. The House Oversight and Senate Judiciary Committees, on the other hand, are more likely to focus on any potential cover-up: for instance, was Comey’s dismissal an attempt to obstruct the FBI’s investigation into the Trump campaign? These investigations will almost certainly overlap, but the different expertise and methods of the different investigative bodies may well allow them to turn up different things.

Third, the different investigators have different personnel. Mueller is a career prosecutor and former FBI Director who is respected by both parties as a technocratic and relatively nonpartisan law-enforcement officer. No one would accuse members of Congress of being technocratic or nonpartisan (nor should we want them to be), but the fact that both parties are represented on committees allows for certain forms of internally adversarial politics to play out. Put differently, to some extent the committee minority can serve as an internal check on the majority, keeping the investigation honest.

House committees might face different political pressures than Senate committees—both because of the more centralized nature of the House and because all House members have to face the voters every two years. By contrast, Richard Burr, who chairs the Senate Intelligence Committee, wouldn’t be up for reelection until 2022 (and has already announced that he will not seek reelection). The different dynamics of the House and Senate could become even more pronounced, of course, if Democrats were to recapture one of the chambers in the 2018 elections.

So there are good reasons for the multiple overlapping investigations. Still, they present the possibility of turf wars and of the different entities making life more difficult for one another. Consider a few recent examples: Comey has reportedly been coordinating with Mueller regarding what he will and will not testify about before the congressional committees. Michael Flynn has invoked his Fifth Amendment right against compelled self-incrimination in refusing to turn over documents subpoenaed by the Senate Intelligence Committee and has said he will only comply if granted immunity. The grant of immunity would make it much harder for Mueller or anyone else to subsequently prosecute Flynn. (Indeed, congressional grants of immunity were the reason that Oliver North’s and John Poindexter’s convictions arising out of the Iran-Contra affair were eventually overturned.) And the FBI has withheld memoranda written by Comey that have been requested by the House Oversight Committee, citing the special counsel’s investigation.

Congressional investigators ought to be deeply skeptical of any attempt to stonewall their investigation by citing the Justice Department’s investigation. As described above, they have different goals and different competencies. Moreover, in contemplating the possibility of serious misconduct at the highest levels, Congress’s goals ought to be seen as overriding. It may be an injustice for a government official to escape deserved criminal punishment, but as a polity it is more important that misdeeds by such officials be brought to light and prevented in the future. And congressional investigations certainly have played a role in publicizing misdeeds and ousting executive officials, ranging from Truman’s Attorney General J. Howard McGrath in 1952 to Reagan’s EPA Administrator Anne Gorsuch in 1983 to, of course, Richard Nixon in 1974.

In addition, congressional investigators have an incentive to insist on their institutional prerogatives. In Watergate, the congressional process was short-circuited by court rulings that treated grand jury proceedings as taking priority over congressional ones. The result was that, when Nixon resigned, the judiciary was treated as the hero. If the Trump administration appears headed in a similar direction, similar reputational benefits will likely accrue to the institution or institutions seen as instrumental in bringing it about. And individual members—perhaps especially Republicans—may see the opportunity to make themselves the heroes of this narrative. Perhaps for that reason, Jason Chaffetz, the soon-to-retire chair of the House Oversight Committee, responded forcefully to the FBI’s refusal to turn over the Comey memos, implicitly threatening to subpoena them: “Congress and the American public have a right and a duty to examine this issue independently of the Special Counsel’s investigation. I trust and hope you understand this and make the right decision—to produce these documents to the Committee immediately and on a voluntary basis.”

Chaffetz is right. The American public does have a right to see the investigative processes currently underway in Congress play out. And in pursuit of them, Congress has the right to the evidence it seeks.

Josh Chafetz is professor of law at Cornell Law School. His work has appeared in top scholarly journals and in national publications, including the New York Times and the Washington Post. 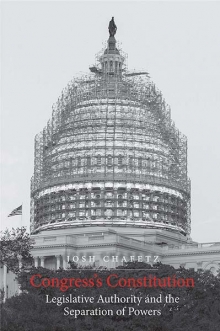