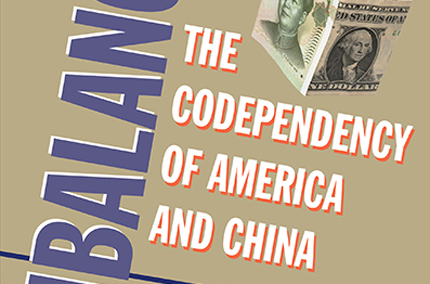 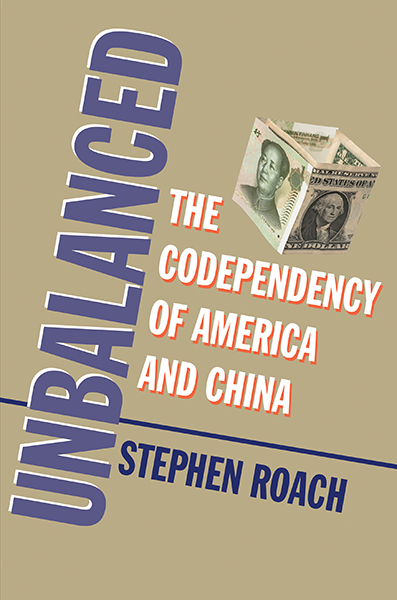 What makes the economic relationship between the United States and China so fraught with anxiety, tension, and a surprising dependency on the successes and failures of the other? Particularly throughout the economic highs and lows of the 21st century so far, the question of China’s ascendance, even so far as surpassing the U.S. as the dominant superpower has been raised by journalists, economists, and political commentators alike, spilling over into daily conversation about everyday American lives and jobs. Now, Stephen Roach, senior fellow at Yale’s Jackson Institute for Global Affairs and School of Management and former Chairman of Morgan Stanley Asia and Chief Economist of Morgan Stanley has written Unbalanced: The Codependency of America and China. In clear facts and terms, Roach lays bare the pitfalls of the current economic codependency between the U.S. and China and describes new opportunities for improving both economies and their troubled relationship. Read below for an interview with Roach on the present challenges in U.S.-Chinese economic development, the next steps following the Third Plenum of the Central Committee of the Chinese Communist Party, and a controversial take on what the United States needs to address in order to continue its prosperity.

Yale University Press: Who has the upper hand in the codependency of America and China?

Stephen Roach: As is the case in human relationships, codependency for economies is not sustainable.  It can lead to imbalances, a loss of identity, and a broad array of tensions and frictions.  As I argue in Unbalanced, there are visible manifestations of all of these characteristics now at work in both America and China.  It’s hard to say who has the upper hand in this relationship.  The United States, with its dominant military power and the world’s largest economy, certainly has a commanding position today.  But a rising China, with a huge reservoir of domestic saving – some 51 percent of its GDP in 2013, or fully three times the 17 percent national saving rate in the U.S. – certainly has the wherewithal to go its own way in the years ahead and break the shackles of its dependence on the United States if it choses to do so.  Saving-short America, still heavily dependent on surplus saving from abroad, has far less latitude in that key regard.

YUP: How has the U.S. and China’s unbalanced relationship created a false sense of prosperity?

SR: Beginning in the late 1990s, the income-strained U.S. economy drew increasing support from the so-called wealth effects of surging asset markets – first from equities, then from residential property and finally from cheap credit.  The problem was that each of these asset-dependent underpinnings ended in bubbles – bubbles that ultimately drew support from Chinese purchases of dollar-denominated assets.  Washington, Wall Street, and Main Street collectively deluded themselves into thinking this asset-dependent growth was a new recipe for economic prosperity.  When the bubbles popped, however, it quickly became apparent that this was a dangerous false prosperity. To the extent that export-led growth in China was dependent on America’s asset and credit bubbles, it, too, went down a path of false prosperity.  When the export underpinnings of China’s external demand collapsed in late 2008 in the depths of the Great Crisis, this, in fact, became painfully evident.

YUP: Why does the U.S. economy depend on China and how can we regain our independence?

SR: U.S. economic growth has long been led by American consumers.  In 2013, personal consumption expenditures accounted for fully 69 percent of U.S. gross domestic product (GDP) – a record for any nation in modern history.  Paradoxically, this consumer-led growth has occurred in a period of unusually sluggish real income growth for most American families.  That’s where China enters the equation – as a source of cheap goods that enables a hard-pressed middle class to buy more with their limited incomes. China has also become a huge source of demand for U.S. government securities; it is now America’s largest foreign lender, currently owning approximately $2 trillion of such assets.  That partially fills the void of a shortfall in U.S. domestic saving and helps prevent U.S. interest rates from rising – thereby providing further support to American economic growth. Regaining our economic independence is simple on paper – boosting our saving capacity and revitalizing the competiveness of our workers and manufacturing industries – but much tougher in practice.

YUP: How has China been able to challenge the U.S.’s global economic leadership?

SR: Thirty years of 10 percent economic growth has now pushed China past Japan as the second largest economy in the world.  It is only a question of when, not if, China will surpass the United States as number one. In Unbalanced, I lay out a scenario that such convergence should come by 2027; there is a distinct possibility that it might occur even sooner than that.  With China having more than four times the population of the United States, these trends are hardly a surprise.  The real measure of prosperity, however, adjusts for population disparities and finds China’s per capita income of $6,600 in 2013, far short of the $51,200 level in the United States.  Under heroic assumptions for sustainable rapid growth and development in China, convergence on a per capita basis is still many decades away.  As that point draws near, only then can we begin to speak of a Chinese challenge to American economic hegemony.

YUP: Which superpower will rebalance their economy first, the U.S. or China?

SR: By all indications, it will be China.  Seven years ago, China’s former premier, Wen Jiabao, sparked the rebalancing debate by his famous critique of the “Four Uns” – a Chinese economy that he depicted as “unstable, unbalanced, uncoordinated, and (ultimately) unstable.”  This led to the enactment of the 12th Five-Year Plan in March 2011, which laid out the broad framework of a consumer-led rebalancing of the Chinese economy.  In retrospect, that plan was more a rhetorical commitment to rebalancing than a detailed blueprint for change.  It was lacking an implementation mechanism.  This has been subsequently addressed in the recently concluded Third Plenum of the Central Committee of the Chinese Communist Party that was held in November 2013, which contained 60 specific reform initiatives and the establishment of a new “leading committee,” headed up by President Xi Jinping, to focus on implementation.  In light of these developments, it is now safe to say that China is firmly on the path of a fundamental economic rebalancing.  The United States, by contrast, seems intent on resurrecting the timeworn model of consumer-led growth – relying on quantitative easing by the Federal Reserve to boost consumer demand through the wealth effects arising from surging asset markets and seemingly unwilling, or unable, to boost its long-term saving potential as a source of future economic growth.

YUP:  Is the American Century over? Is the Chinese Century next?

SR: History underscores the ebb and flow of global economic leadership.  China was the dominant economy in the world through the mid-19th century.  Then it was Europe and now the United States.  The fickle fate of economic power is very hard to predict with any certainty.  Mindless extrapolation would argue for the ascendancy of China and the end of America as the world’s dominant economy.  But so much could happen along the way to render simple extrapolations far off the mark – either in China, the United States, or in both of these codependent economies.  China has been on an extraordinary course for thirty years.  But, if it doesn’t make meaningful progress on the road to rebalancing, or if it gets tangled up in geopolitical security tensions with its Asian neighbors, it could fall into the dreaded “middle-income trap” that has ensnared most developing economies since the end of World War II.  Similarly, America is living on borrowed time – literally and figuratively.  If it doesn’t focus on its long-term saving agenda, it will lack the wherewithal to invest in its people and productive capacity, undermining its longer-term growth potential and squandering its seemingly invincible role as the global hegemon.

YUP: Going forward, what does the U.S. need in order to prosper in this relationship?

SR: First and foremost, the U.S. body politic needs to take a long and hard look in the mirror and accept responsibility for America’s homegrown economic problems such as inadequate saving, bubble-prone monetary and regulatory policies, and a loss of competitiveness.  In doing so, it must stop pinning the blame on others, especially China.  Yes, America has a large bilateral trade deficit with China that many believe is putting pressure on jobs and real wages of American workers.  China’s alleged currency manipulation only compounds its blame, goes this view.  But the so-called China problem is only part of a much broader multilateral problem as underscored by U.S. trade deficits with 102 nations in 2012.  The cause of this multilateral imbalance again goes back to America’s chronic saving shortfall and the need for the U.S. to run a large current-account and multilateral trade deficit in order to attract the foreign capital that it needs to fill its saving void.  As I stress in Unbalanced, there is no bilateral fix for America’s multilateral problem.  In other words, China bashing is not the answer to that which ails American workers.  At the same time, Washington’s trade negotiators have every reason to demand fair and equal treatment from China under international trade conventions – especially on grounds of market access in light of the limited penetration of China’s domestic markets by U.S. manufacturers and services providers.  As China shifts to more of a consumer led model, the market access issue will become increasingly critical for China’s major trading partners, such as the United States. China is America’s third largest and most rapidly growing export market.  Shame on us if we squander the opportunity to convert Chinese rebalancing into a new source of growth for a growth-starved U.S. economy.

Stephen Roach is senior fellow, Jackson Institute for Global Affairs and School of Management, Yale University. Prior to that he was Chairman of Morgan Stanley Asia, and for the bulk of his career on Wall Street was Chief Economist of Morgan Stanley. Prior to joining Morgan Stanley in 1982, Mr. Roach served on the research staff of the Federal Reserve Board and was also a research fellow at the Brookings Institution. He holds a Ph.D. in economics from New York University. Roach has written extensively for the international media and appears regularly on television around the world. Unbalanced: The Codependency of America and China is available now from booksellers.