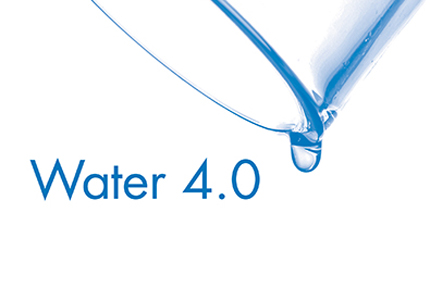 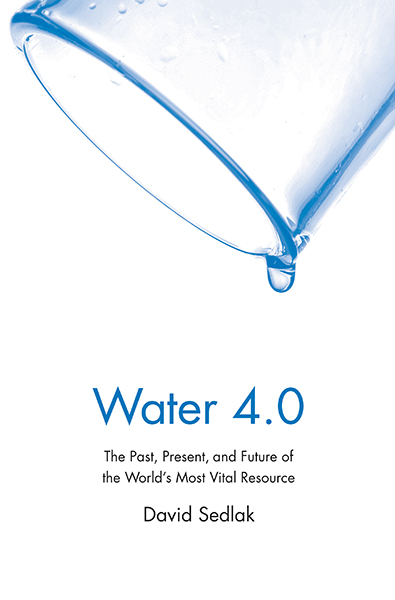 With the planet’s clean water sources strained by over-population and pollution, Yale University Press sat down with Water 4.0 author David Sedlak to talk about the future of urban water systems. For more on what we must do to protect our most precious resource, visit water4point0.com.

Yale University Press: In Water 4.0, you discuss the four stages of urban water solution’s history. Can you explain them for us?

David Sedlak: Whenever people congregate in big groups they need access to a water supply.  The first revolution in urban water occurred when the Romans created a complex system of dams, aqueducts, underground water pipes and sewers that could provide people with a daily allotment of water that was comparable to what we use today.  When medieval villages started growing into cities during the second half of the nineteenth century, they adopted this approach, creating bigger and better water systems in cities like Paris, London and New York.  The plentiful water supply made it possible to keep the streets free from the muck that had plagued medieval cities.   It also created a new problem by spreading disease to communities that drew their water downstream.  After a few decades of outbreaks of cholera and typhoid fever, desperate engineers created drinking water treatment processes that made it possible to safely consume water from sewage-contaminated rivers.  The spread of this second revolution in urban water technology extended average life spans by almost a decade in the US.  Cities grew without worrying about the effects of water pollution until the environmental impacts of sewage discharged by cities became too obvious to ignore.  Between the 1950s and 1970s, the third revolution in urban water systems resulted in the construction of sewage treatment plants that eliminated the dead fish and noxious odors that had become commonplace downstream of cities.  As discussed in the book, a confluence of factors—including climate change, population growth and underinvestment in upkeep of pipes and treatment plants—is leading to a need to embark on a fourth revolution.

YUP: What were the major benefits that arose from the first three advances in the harnessing and treatment of water? Were there any drawbacks from each?

DS: The first advance—an imported water supply and the use of water as a means of waste disposal—liberated people from the burden of having to haul and store water as well as the messy job of managing their own wastes.  Unfortunately, the dilution of feces and urine with large quantities of water made it virtually impossible to capture and reuse the nutrients locked up in the wastes.  By discharging sewage above a neighbor’s drinking water supply, the first set of innovations also spread waterborne disease to downstream communities.

The second advance—drinking water treatment—largely solved the problem of waterborne disease in developed countries, an advance that has been recognized by the US National Academy of Engineering as one of the top four most important technological advance of the twentieth century.  The main drawback of the newly created drinking water treatment system was related to a lack of knowledge about the risks to public health posed by the use of lead pipes and chlorine—two problems that many cities are still struggling with today.

Finally, the third advance—widespread construction of sewage treatment plants—helped to achieve the goal of making it possible to swim and fish in our lakes, rivers and estuaries.  Here, the main drawbacks were related to our inability to use the enthusiasm for building sewage treatment plants to create a system that assured that the plants would be maintained in the future.

YUP: So now that we approach the “Water 4.0” stage, where do we go from here? What responses and approaches are on offer?

DS: To get a better idea of what the future holds, we can look to the cities that are on the front lines of the struggle.  In cities where existing water supplies are unable to keep up with demand, we are seeing the traditional approach of water conservation and the development of more imported water sources being taken as far as they can go.  Some of these cities are starting to experiment with new approaches for turning water that hasn’t been seen as being fit for consumption—seawater, sewage, stormwater runoff—into drinking water.  In cities where too much water is posing problems, the tried-and-true engineering approaches of digging bigger underground drainage tunnels are being abandoned in lieu of green roofs, rain gardens and stormwater retention ponds.  The big challenge is to figure out which of the many possible approaches and specific technologies is actually practical, given financial limitations and need to maintain the reliable performance that we demand of our water systems.

YUP: What are some of the technology-based solutions that could be pursued?

DS: As communities struggle to address the inadequacies of their existing systems, a number of new technologies are emerging as candidates for the fourth revolution.  On the water supply side, water reuse and seawater desalination are becoming inexpensive and reliable enough to start replacing imported water supplies.  Newer technologies like urban stormwater capture and closed loop water systems in buildings have the potential to help cities break free of the need for centralized water treatment and distribution, but they are not as well developed.  Also, new technologies that employ the latest developments in information technology, wireless communication and materials science are creating opportunities to conserve water in ways that seemed impossible twenty years ago.  On the wastewater side, new technologies are creating modular sewage treatment plants that could be installed in a basement or in an unobtrusive shed in a neighborhood.  These tiny treatment plants extract the energy and nutrients in sewage and reuse the water for landscaping or non-potable applications within buildings.

YUP:  In your book, you note that cities are historically the first to both show manifestations of water pollution problems as well as find solutions. Are there cities around the world that are ahead of the curve with their water treatment and conservation? Are their methods adaptable in the U.S?

DS: Many people consider Singapore to be at the leading edge of new water technologies.  The Singaporeans certainly have made great efforts to advance water recycling, desalination and water conservation, but to me the most amazing thing about Singapore has been their success in capturing and using most of the rain that falls within the city.  If other cities around the world were to adopt Singapore’s practices of urban stormwater capture and use, it would go a long way toward solving many water supply problems.    This could also help cities avoid much of the damage caused by excess stormwater runoff.  Adopting this approach elsewhere is going to take some effort because Singapore receives a lot more rainfall than cities in places like California, Texas and Arizona where water supply concerns are greatest.

Israel is another example where progress is being made, particularly with respect to cost-effective seawater desalination.  Desalination currently accounts for almost 20% of Israel’s urban water supply, and the national plan calls for it to increase to 30% in the near future.  Cost has always been the big impediment to widespread investment in seawater desalination.  The Israelis were able to cut the costs of  this process by adopting a standardized set of designs, employing the latest energy-saving technologies and linking the plants together via the country’s regional water canal.  The development of widely adopted conventions for plant design and permitting as well as sharing the costs and benefits of desalination regionally could offer similar benefits for US cities, but we still have not resolved our concerns about the large amounts of energy consumed by the desalination process.

YUP: Is there any good news in the race to confront the newest wave of urban water challenges? Do we see anything particular from the entrepreneurial or research and development communities that is taking positive shape?  Or are we looking at the likelihood that another crisis will be needed to activate meaningful pursuit of new solutions?

DS: Overall, it’s a good news-bad news situation.  The good news is that the latest technological developments coupled with research and experience gained in the cities that are on the frontline of the challenge are providing us with the tools needed to meet our future urban water needs without compromising on safety and reliability.  The bad news is that our expectations that water services will always be inexpensive is discouraging investments in developing the technologies more quickly or in retooling our water systems before they reach a state of crisis.  Hopefully, by paying attention to the high price of inaction and understanding the technologies that can help to solve our problems, we will be empowered to act before change is forced upon us in a crisis.

YUP:  What can a concerned citizen do? Do you have any advice for them?

DS:  There are a number of things that you can do to support your urban water systems and to pave the way for change.  The easiest and most direct actions involve water conservation. Upgrading to the latest versions of water-saving appliances is a good investment that can substantially reduce water consumption while saving energy.  It is also becoming easier to reduce outdoor water use without compromising aesthetics through the use of modern irrigation controllers that fine-tune watering based upon weather and soil conditions.  You also can choose household products more wisely, with an eye to the fact that all of the chemicals that you use in and around your home have the potential to end up in a nearby river or the drinking water of your downstream neighbors.  Although water conservation and consumer choices are powerful tools, the most important thing that you can do to bring about change is to become more actively involved in the decision-making process.  By bringing knowledge of the stakes and the range of solutions to discussions with elected officials and the people in charge of planning for future investments in your water system, you can assure that the next generation of urban water will be here when it is needed.

YUP:  David, anything else you want to add?

DS:  Concerns about the future of urban water systems are not limited to the dry Southwest.  Increasingly, cities in the southeast, like Atlanta, Tampa and Dallas, are struggling to provide enough water for their cities in dry years.  In the future, concerns about the costs and environmental impacts of imported water coupled with growing water demands is likely to make this issue more relevant to the rest of the country.  Furthermore, water supply problems and the solutions being developed in the United States have important implications for cities facing climate change and population growth in developed and developing countries around the world.

Members of the public are often surprised when they learn about the presence of hormones, drugs and personal care products in their water supply.  As explained in this book, the presence in drinking water of low concentrations of chemicals that were flushed down the toilet should not be a surprise.  The challenge we face is to determine which, if any, of those chemicals could pose a risk to our health or the health of waters where treated sewage is discharged and to design ways to prevent the chemicals from getting there in the first place.

David L. Sedlak is the Malozemoff Professor of Civil and Environmental Engineering at the University of California, Berkeley, co-director of the Berkeley Water Center, and deputy director of the National Science Foundation’s engineering research center for Reinventing the Nation’s Urban Water Infrastructure (ReNUWIt). He is a leading authority on water technology. He lives in Berkeley, CA.