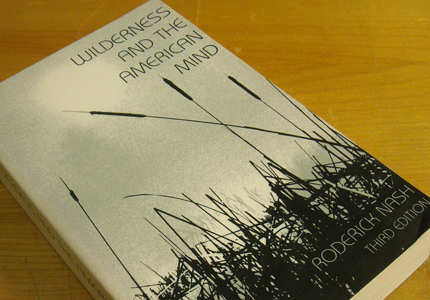 Right before Yale College’s course “shopping period” at the beginning of each semester, I visited the campus bookstores. Among the best parts of each new semester was an excuse to buy new books, and I was drawn to more than a few courses based solely on the corresponding titles on display at the York Street Barnes & Noble or our beloved former Labyrinth Books. One such course was a seminar on the history of environmental justice taught by a new visiting faculty member, and now a Yale University Press author, Paul Sabin. The book that drew me in was Roderick Nash’s Wilderness and the American Mind.

Wilderness was then in its third edition, published in 1982; its unremarkable jacket featured 70s era sans serif type and cattails along a lake. It wasn’t the jacket that drew me in, but the title, and particularly the questions embedded therein: is there really such a thing as the “American mind”? If so, what does wilderness have to do with it? I spent several weeks with Wilderness during Sabin’s course and came to admire Nash’s accessible, direct writing style, as well as his prescient insight into the efforts that would become our present day environmental and conservation movements. I toted it around in the dining halls and read it on the city bus, dog-earing and underlining. It was one of those books that I had to keep, that remained a companion and reference long after the class was over.

Waiting in the lobby for my first interview at Yale University Press, I noticed that same edition of Wilderness on a bookshelf. Only then did I run my eyes down the spine and notice the publisher. Years later, as I began to work on our course books program here at YUP, I wrote to Nash about reissuing his now classic text as a fifth edition. For months, he didn’t respond. I left messages at the UC Santa Barbara Environmental Studies office. I sent old-fashioned printed letters. Finally I wrote with my story of picking a class based on his book, of its role in piquing my interest in environmental history, of toting it around with me from country to country, apartment to apartment, all these years. And this time he replied. 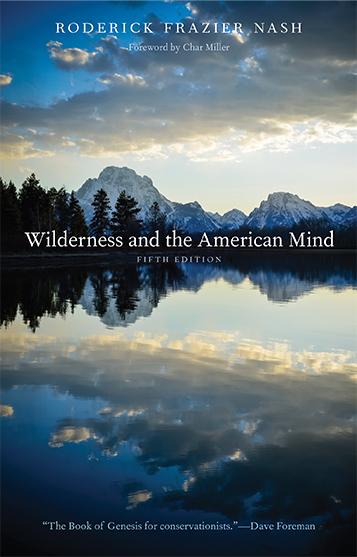 Nash told me that he submitted Wilderness to Yale University Press as an unrevised doctoral dissertation, when he was not much older than I was when I first read it. The year was 1965, the peak of the African-American Civil Rights Movement and U.S.  military engagement in Vietnam. Environmental concerns were not making headlines. Nash not only examines all of American environmental history but also boldly offers an historically-framed call to action. Through evidence, Nash demonstrates that the positive shift in American ideas about wilderness does not independently ensure any level of protection for wild places. It takes broader movements and efforts to save them.

Published in 1967, Wilderness and the American Mind was met with immediate critical acclaim. Though its influence would only be felt over time, as the movements Nash traced continue to grow in importance. Now more than four decades later, Nash’s book is an essential classroom text in environmental history, American history, and environmental studies, warranting our brand new fifth edition. This trajectory has also earned the book its oft-cited descriptor as “the Book of Genesis for conservationists.” And, much less remarkably, it was the first of many books I would come to love from Yale University Press.