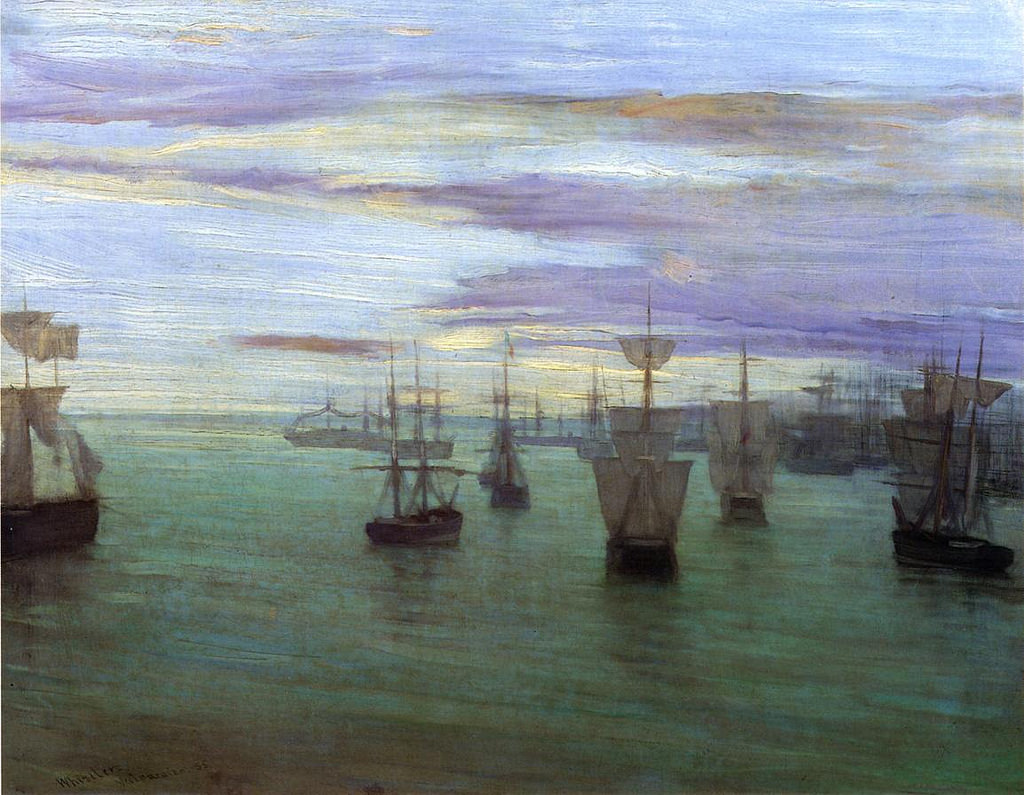 Image above is a photograph of Whistler's "Crepuscule in Flesh Colour and Green: Valparaiso," used with permission.

We are thrilled to announce an exciting new blog feature: David Ebony, one of our favorite writers about art and artists, will contribute regular interviews with authors, artists, curators, and other personalities from the art world at its intersections with our publications on art and architecture.

If today’s art world sometimes seems screwed up, with an inordinate amount of attention given over to celebrity, inflated prices and self-gratification, one might be tempted to put the blame squarely on the shoulders of James McNeill Whistler (1834-1903). In the mid 19th century, Whistler introduced a new level of showmanship and self-promotion for artists that Salvador Dalí would have envied. The American-born expatriate Whistler battled the stodgy art establishments of Paris and London, and fought critics head on—often with vitriolic diatribes in the press, and occasionally with physical assaults in public—all to defend the integrity of his aesthetic vision.

His rebellious efforts to deflate the power of art institutions and their attendant critical machinery had a significant and lasting impact on the way contemporary art and the artist’s role in society is perceived today. No longer would the artist serve merely to bolster the status quo. The Butterfly, as Whistler dubbed himself in mid career, set an example of unapologetic egoism that reached its apotheosis in the 20th century with the likes of Andy Warhol and Damian Hirst, for whom artistic merit, fame and art market success became interchangeable.

Whistler certainly had the talent to justify his high and vocal self-regard. And there is an alternate side to the cult-of-personality that surrounds him and his legacy. At the very least, the ostensible bridge he built through his art, linking 19th century Realism, Symbolism and Impressionism, makes him a key figure in art history. During his tumultuous career, he managed to create some of the most iconic art works of the period, including paintings such as Arrangement in Gray and Black, Portrait of the Painter’s Mother (1871), Nocturne in Black and Gold, The Falling Rocket (ca. 1874) and the installation permanently on view in the Smithsonian’s Freer Gallery, The Peacock Room, Harmony in Blue and Gold (1876-77). His prolific output and unfathomable energy were legend even in his lifetime. One wonders if ultimately his obsessive careerism and titanic ego were all that necessary to secure recognition for his widely acknowledged and formidable achievement.

This question arises, along with many others, in historian Daniel E. Sutherland’s forthcoming biography Whistler: A Life for Art’s Sake (Yale University Press, March 2014). The first full-scale study of the artist in twenty years, the book chronicles the extraordinary life and times of this unconventional and often misunderstood artist. In the book, Sutherland puts the popular notion of Whistler as the consummate art-world grandstander in perspective. He considers that Whistler’s eccentricities, both public and private, were solely intended to support his art. In a recent phone conversation, I spoke with the author about the book’s genesis and its timely relevance.

David Ebony: Why Whistler? Why now? How did the book evolve?

Daniel S. Sutherland: After publishing a number of books on the Civil War, I decided I needed a break. I pulled out an art history book and went to a chapter on Whistler. It was a fascinating story, and I wound up devoting the following six or seven years to him. I had an enormous learning curve that stretched out over a long period of time. I immediately set out to learn the methodology of how to write a biography. I read all the previous biographies of Whistler, and practically all those I could find on anyone and everyone he knew.

Ebony: How did your approach differ from the other Whistler biographers?

Sutherland: I tried to more thoroughly and successfully draw the distinction between the fanciful image we have of Whistler the showman, and the painter who was completely devoted to his art. I wanted to emphasize the complexities of the fellow. The subtitle of the book plays off this idea. Above all, Whistler was someone dedicated to creating beautiful things. Some of his contemporaries misunderstood this and so he felt he had to define himself as an artist. In writing the book, I tried to think of art as Whistler did, and focused on his concern for his own legacy.

Ebony: His obsessive anxiety about his legacy seems to have started very early on.

Sutherland: He was convinced of his own talent early in his career, and he thought his success as an artist would be a cinch. But some critics began to pick at him from the outset. He realized that he couldn’t depend on the work to speak for itself. Once that realization came, he really ran with the idea of finding novel ways to promote himself and his art.

Ebony: How did he convince himself that direct, public confrontations with critics in the press and in person would be advantageous to his career?

Sutherland: He took a risk. He thought about critics in two ways—on the one hand, nothing was going to bring more attention to his work than public arguments about it with prominent figures. On the other hand, his clash with important critics like John Ruskin would wind up hurting his sales.

Ebony: One of his more successful innovations that you discuss at length in the book, and which has a great deal of relevance for contemporary art today, was in making the installation of his works an important part of the art. He was exacting about the way the works were presented, designed the shows, and fought the art world establishment to have control over the exhibition of his works.

Sutherland: Yes; and the way individual works were presented was also crucial for him. For instance, he thought of the frame as an extension of the painting and designed many of them himself. It was a new idea at the time. Certain of his contemporaries, like his friend Degas, were thinking along similar lines.

Ebony: One of the strangest things about Whistler was his questionable and contradictory political stance. He sympathized with the Confederacy during the Civil War, yet some of his ideas were quite progressive. For instance, he appears to have been an early feminist, promoted female artists and, as you mention in the book, said that women were the future of art.

Sutherland: I don’t think he would have thought of himself in that way—as a feminist. He was concerned only with what women artists were capable of producing. Throughout his life, he was surrounded by strong women. And the various model-mistresses he lived with were women who stood up for themselves. He was sensitive to women, for sure, and they respected him. But one explanation of why he was supportive of women as artists was because he didn’t foresee that they could ever become art-world rivals. With young male artists, however, he was harsher because he saw them as competition and potential threats to his career.

Ebony: What’s the main idea you hope readers come away with from the book?

Sutherland: I hope they’ll recognize Whistler as a pivotal figure in the turn toward modernism. Maybe also to dispel the popular image of him as simply a dandy or gadabout is most important. Those notions about Whistler are completely wrong. For him, the art came first and foremost.

David Ebony is currently a Contributing Editor of Art in America and its former Managing Editor, part of an association with the magazine that spans over 21 years. He has written for A.i.A. more than 450 signed articles, including features, reviews, profiles and news stories. He is also a senior editor-at-large for SNAP Editions, based in New York. He is the author of “David Ebony’s Top 10,” a long-running contemporary art column for Artnet.com, which is accessible on the Artnet web site. He was a Contributing Editor and writer for Lacanian Ink, (from 1998-2012), a journal of art and psychoanalysis. He served for two years (2002-2003) on the Board of Trustees of AICA, the Association internationale des critiques d’art, of which he is a long-standing member. He lives and works in New York City and Clermont, New York. Among his books are Anselm Reyle: Mystic Silver (2012); Carlo Maria Mariani in the 21st Century (2011), Dale Chihuly; Garden Installations (2011); Emily Mason, (2006); Botero: Abu Ghraib (2006); Craigie Horsfield: Relation (2005) ; and Graham Sutherland: A Retrospective (1998).

Daniel E. Sutherland is Distinguished Professor of History, University of Arkansas. The recipient of more than fifty awards, honors, and grants, he is best known for his acclaimed series of books chronicling nineteenth-century America.