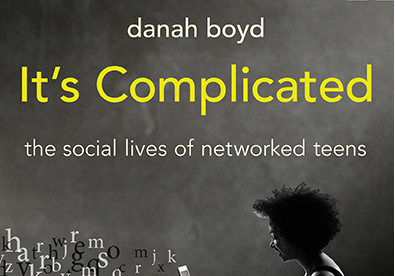 It’s a common sight these days to see young people glued to their smartphones, tablets, and assorted other electronic devices–and that continues to confuse and worry many parents. Why do teenagers text their friends instead of talking to them when they’re in the same room? Are they addicted to technology? How are they going to get into college if they’re always so distracted? These are just a few of the questions that the prominent social media scholar danah boyd has frequently encountered from concerned adults, and such attitudes often permeate parenting guides and journalistic accounts of teenagers’ relationships with technology. In the newly released It’s Complicated: The Social Lives of Networked Teens, boyd utilizes eight years of research and her background in technology to assess the anxieties surrounding teenagers’ use of social media. She makes a compelling case that, despite an environment of rampant fear-mongering, technology can actually empower teenagers to become informed and engaged citizens through their online interactions. 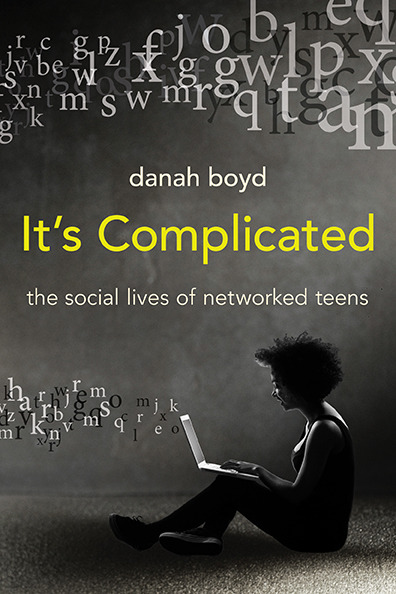 boyd begins by pointing out that history is rife with examples of hand-wringing at the arrival of any new technology: when the sewing machine was invented, people feared the sexual implications of women moving their legs up and down; when the Walkman came along, it was seen as a malicious device that would cause people to stop communicating with each other. Then there were also the new genres of media such as comic books, penny arcades, and rock-and-roll music, which were believed to be gateways to hooliganism. Given this history, then, we should take such episodic moral panics with a grain of salt, boyd argues. Instead, it would benefit parents to consider their children’s underlying motivation for being tied to their iPhone 24/7: the desire for social connection.

Most teens are not compelled by gadgetry as such–they are compelled by friendship. The gadgets are interesting to them primarily as a means to a social end. Furthermore, social interactions may be a distraction from school, but they are not a distraction from learning. Keeping this basic social dynamic firmly in view makes networked teens suddenly much less worrisome and strange. […] Teens often want to be with friends on their own terms, without adult supervision, and in public. Paradoxically, the networked publics they inhabit allow them a measure of privacy and autonomy that is not possible at home where parents or siblings are often listening in. […] Although many adults think otherwise, teens’ engagement with public life through social media is not a rejection of privacy. Teens may wish to enjoy the benefits of participating in public, but they also relish intimacy and the ability to have control over their social situation.

Considered in this light, the puzzling sight of teenagers who seem surgically attached to their devices turns out not to be so strange after all: it is simply the modern manifestation of an age-old need to stay connected. It’s Complicated is full of other such insights into the lives of teenagers in a digital world, helping parents, teachers, policy-makers and journalists to understand the deeper motivations for what otherwise appears to be a shallow interaction with electronic objects. With sociological nuance and a journalistic flair, boyd unravels the complicated realities of teenage life, ultimately offering the reassuring conclusion that the kids are really quite all right.