As Gego exhibitions sweep across Europe this spring, (currently at the Maison de l’Amérique Latine in Paris, and coming soon to the Hamburger Kunsthalle, Kunstmuseum in Stuttgart, Henry Moore Institute in Leeds, and the Royal Academy of Arts, London), we are celebrating the recent release of the magnificent book Untangling the Web: Gego’s “Reticularea,” An Anthology of Critical Response.  We are lucky today to have an insightful guest post, with lovely accompanying images, from volume editor Melina Kervandjian.

There are a few exceptional site-specific installations that paradoxically transcend site specificity and become meaningful and even transformative for audiences who may never actually experience them, at least in a direct, physical way. Instead, aided in part by documentary photos, sketches, reviews, scholarship, fragments, and/or related artworks, these expressions begin to occupy alternate, virtual spaces perpetually defined and redefined by viewers separated from the initial installations by both space and time. In June 1969, the German-born Venezuelan artist Gertrud Goldschmidt (1912–1994), better known as Gego, presented what would become such an installation when she astonished, even enchanted visitors to Sala 8 at the Museo de Bellas Artes, Caracas, with Reticulárea. Using primarily stainless-steel wire, Gego, who was described by one contemporary reviewer as a “web-fairy,” wove an intricate, net-like environment which both obscured and revealed the museum space while demanding the fundamental, active participation of the viewer’s eyes, mind, and body. However, over the years, the central role of the viewer as an activating, engaging presence in Reticulárea has been undermined by the fact that the work has often been out of public view (for numerous institutional, financial, political, and conservation-related reasons), making it relatively difficult to access or experience in person. Nevertheless, Gego’s most celebrated creation has overcome such mere physical obstacles to establish itself as a watershed achievement in twentieth-century art, managing to cast its web well beyond an isolated museum space.

Reticulárea is more than a discrete environment or a single installation (or even a group of subsequent re-installations). Reticulárea (literally, “reticule area”) is an idea; it is a metaphor and a microcosm for various natural and social universes; it is, as María Elena Ramos has written, both “geometry” and “the poetic disruption of that geometry”; it is and is not architecture, sculpture, a drawing without paper, a public space woven by Gego and privately, if only momentarily, un-woven and re-woven by the mind of the individual viewer; it is an enveloping presence which pursues transparency and the elimination of boundaries; and it is a thread that intricately runs throughout Gego’s career. Traces of it exist in the work she produced before bringing Reticulárea to life at Museo de Bellas Artes (and then re-installing or, more precisely, re-imagining it just a few months later in New York at the Center for Inter-American Relations, now the Americas Society). And Reticulárea’s mark can be seen in both subtle and obvious ways in the wide range of works Gego would produce after this pivotal accomplishment, including in a number of more modest iterations (in works on paper as well as in metal) which she also considered (and titled) Reticulárea.

Regardless of whether she was self-consciously making Reticulárea(s), Gego was often guided by the principles of a wider—to borrow a phrase from Luis Pérez Oramas—“reticulárea practice,” as well as by the core belief, perhaps influenced by her appreciation for the Bauhaus, of the blurring of the artificial boundaries between various media and between the arts in general. Indeed, not only did Gego emphatically reject the limiting or categorizing of her work (declaring, for example, “I still don’t like the word sculpture in relation to my work”), she actively pursued interdisciplinary collaborations, especially in relation to her “reticulárea practice,” working with such figures as the Venezuelan poet Alfredo Silva Estrada, the dancer/choreographer Sonia Sanoja, and even (albeit indirectly) the American composer John Cage, whose Roaratorio: An Irish Circus on Finnegans Wake (1979) was juxtaposed with another site-specific iteration of Reticulárea (1982) at the Alte Oper, Frankfurt, where Gego’s installation incorporated tall loudspeakers which piped through a recording of Cage’s complex, enigmatic composition.

Such collaborations are further evidence of an underlying conviction—a conviction perhaps most fully expressed by Reticulárea—that an artistic expression is never finite, is intricately interconnected with other expressions, and is fundamentally anti-hierarchical; it is continually woven and re-woven, maybe even tangled and untangled by the artist and her viewers, wherever (and whenever) they may be. While we must not marginalize or dismiss the value of having the relatively rare opportunity of traversing the space of Reticulárea (1969), we should also embrace its revelation and assertion that it can be experienced in multifarious ways and places, catching glimpses of it in nearly all of Gego’s creations.

Indeed, it is this very belief that inspired the new bilingual book, Untangling the Web: Gego’s Reticulárea, An Anthology of Critical Response (co-published by The Museum of Fine Arts, Houston, and Fundación Gego, Caracas, and distributed by Yale University Press). In many respects, this volume, which features a broad range of writings on and responses to Reticulárea and its iterations (and on related works by Gego), including reviews, letters, and scholarly texts, as well as numerous installation photos, aspires to function as a virtual Reticulárea of sorts or at least as yet another conduit for experiencing Reticulárea(s). Gego, who relished challenging spatial and temporal boundaries and who relentlessly pursued transparency and multifaceted dialogues, surely would have appreciated any effort to position Reticulárea as a work that can be conceptually and continually regenerated (both by herself and by her viewers, past, present, and future), in order to perpetually offer new perspectives.

Melina Kervandjian co-edited Untangling the Web: Gego’s Reticulárea, An Anthology of Critical Response. She is an art historian and editor who works primarily with the Museum of Fine Arts, Houston. 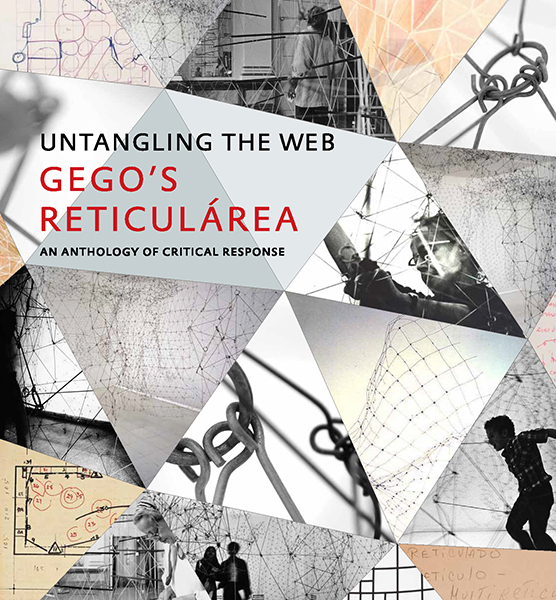