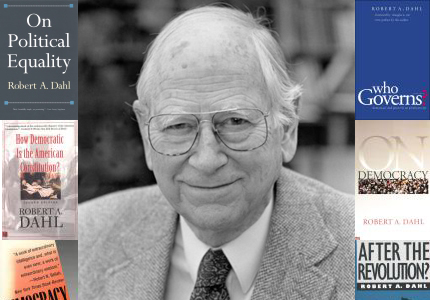 Born in 1915 in Iowa, Dahl’s family moved to Alaska during the depression. He graduated from the University of Washington in 1936 and received a doctorate in political science from Yale in 1940, joining Yale’s faculty in 1946. In the intermittent years, Dahl enlisted in the Army, serving in Europe during World War II. He was decorated with the Bronze Star Medal. He also worked as an economist for the War Production Board.

Who Governs?, winner of the 1962 Woodrow Wilson Prize, argued against the conception that political power is held by one elite group through a close examination of New Haven, Connecticut. Instead, Dahl suggested power is comprised by groups with competing interests, what he termed polyarchy. Democracy and Its Critics, an analysis on the nature of democracy and its function, won the Woodrow Wilson Prize in 1990 and the Elaine and David Spitz Book Award in 1991. Dahl earned many such accolades, and in 2002 The New Yorker wrote he was “about as covered with honors as a scholar can be.”

Known for being a generous presence, attentive adviser and active participant in the university community, Robert Dahl will be missed. Yale University Press is privileged to be the publisher of eight of Dahl’s books including After the Revolution? (1990), How Democratic Is the American Constitution? (2003), and his most recent, On Political Equality (2007).