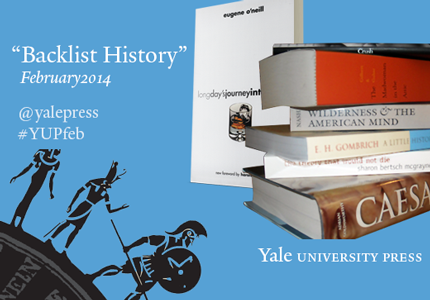 Rereading books is a special kind of pleasure. The books that we revisit over the years provide us with markers of how much we have changed since the last time we perused those pages. This month the Yale Press Log would like to take a break from the rush of telling you about the new books that we publish daily, to revisit some of our past favorite books. These highlights, from our every subject area of our list, hold a special place on our library shelves.

Literary classics like Eugene O’Neill’s Long Day’s Journey into Night and William Shakespeare’s The Tempest remain on must-read lists everywhere, but more recent books on history, philosophy, and social science have also made their way into our perennial reading lists. Adrian Goldsworthy’s Caesar is the definitive biography, authoritative and clear; The Courage to Be by Paul Tillich was named one the Books of the Century by the New York Public Library; and Roderick Nash’s Wilderness and the American Mind has inspired new readers through five editions; read Yale University Press editor Sarah Miller’s reflections on the book’s publishing history.

We were saddened to hear of Robert Dahl’s recent passing, just shortly after we had prepared the month’s list. A prolific author, Dahl published eight books with Yale University Press including Who Governs? and On Democracy. Dahl’s influence on the field of political science has been recognized in numerous honorary doctorates and other awards. His books are clear standouts in our political science list.

In the field of history, the Little Histories series has grown to cover the more specific histories of Philosophy, Literature, Science, and Language, but the original A Little History of the World by E. H. Gombrich takes it all on- the history of humankind from the Stone Age to the atomic bomb. Why settle for less than everything?

In honor of February’s Black History Month, our backlist is filled with biographies like David Margolick‘s Elizabeth and Hazel or Barbara Ransby‘s Eslanda, the groundbreaking scholarship of the Atlas of the Atlantic Slave Trade, revelatory histories of the Civil War and Reconstruction era (Carla Peterson‘s Black Gotham, William G. Thomas‘s The Iron Way), political studies like Melissa Harris-Perry‘s Sister Citizen, health and wellness with Dr. Michelle Gourdine in Reclaiming Our Health, and classic African-American voices like Frederick Douglass, to name but a few.

From the sciences, James Gustave Speth’s American Crisis series, America the Possible: A Manifesto for a new Economy, The Bridge at the Edge of the World: Capitalism, the Environment, and Crossing from Crisis to Sustainability, and Red Sky at Morning: America and the Crisis of the Global Environment, provides a complete picture of the Earth’s current environment and how our modern economic and political structures need to change to ensure a sustainable future. Essential reading for all planet dwellers.

To discover more Yale University Press titles, be sure to sign up for our e-newsletter and receive a month-long Yalebooks.com discount on select backlist titles using the code going out this Friday, February 28!

Did we miss any of your favorite Yale University Press books? Tweet them to @yalepress!