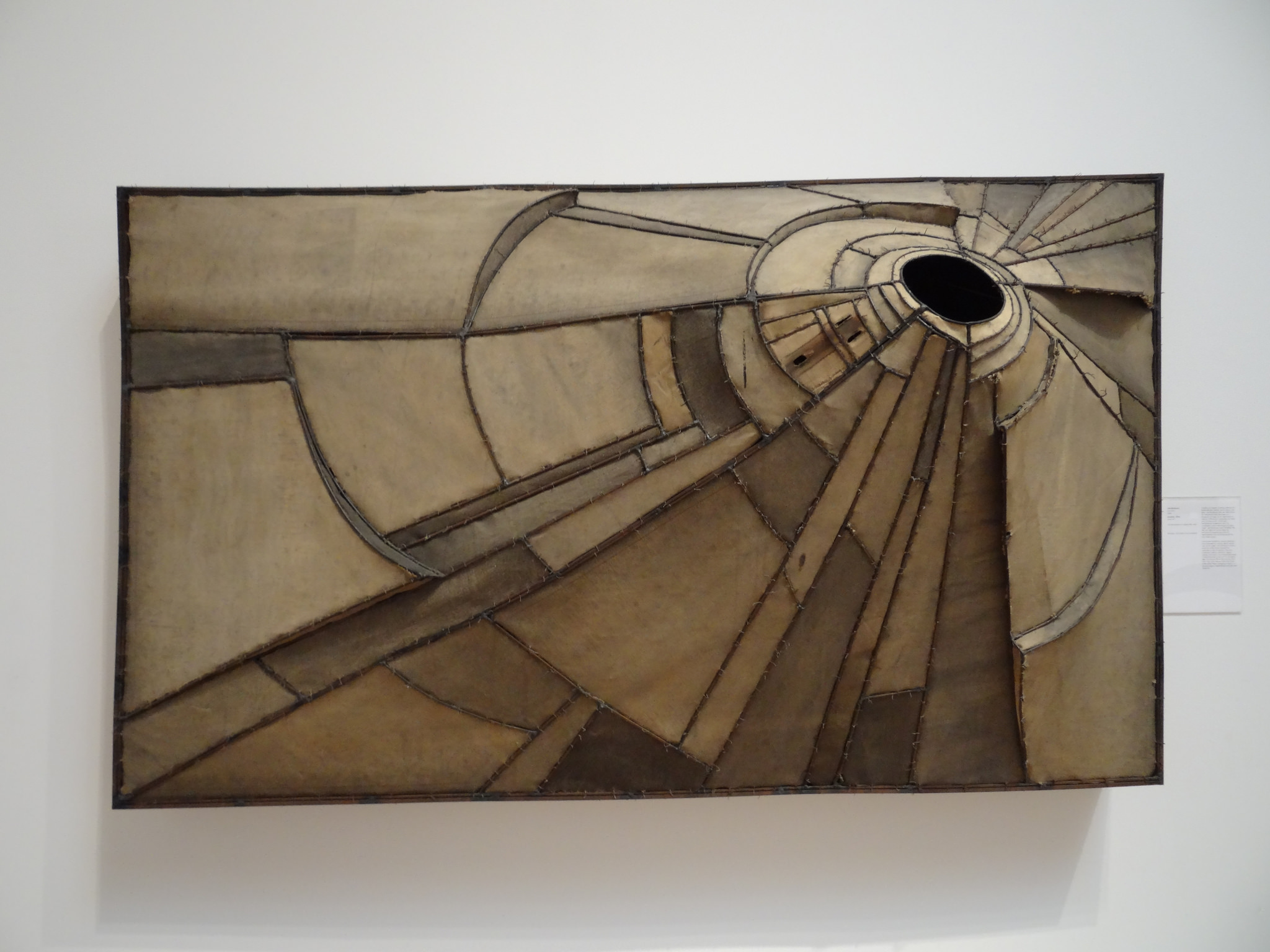 Image above is a photograph by Esther Westerveld of "Untitled" (1959) by Lee Bontecou, used with permission.

For the innovative work she produced in the 1960s—large-scale abstract relief sculptures made of welded steel, canvas, wire and soot—Lee Bontecou has earned a very lofty position in the canon of post-war American art history. Writing in Arts Magazine in April, 1965, artist and critic Donald Judd lauded Bontecou as “one of the first to use a three-dimensional form that is neither painting nor sculpture. Her work is explicit and powerful.”

Bontecou’s intricate bas-relief sculptures of the period, with somber colors and dramatic shading, often feature a large centralized black hole, or void, which conveys a sense of deep space. The work at times recalls machine forms like stylized airplanes. Sometimes they also suggest rather ominous presences as if they might be ossified remnants of the once-vibrant but now dissolute Industrial Age.

Later, inspired by Rachel Carson’s 1962 book Silent Spring, Bontecou further explored unorthodox materials and processes, creating vacuum-formed plastic flowers and other subjects that address environmental concerns. Her career is unusual as she left the New York art-world at the height of her fame in the early 1970s, eventually settling in rural Pennsylvania in the mid 1980s, where she found an ideal solitude in which to pursue her experimental work.

Born in Providence, Rhode Island in 1931, Bontecou grew up in Westchester, New York, in a rather industrious family. It is important to note, as it informs the artist’s later work, that during the war years, her mother made transmitters for submarines and her father worked in the aircraft industry, selling gliders to the military. After the war, her uncle invented the first all-aluminum canoe.

Beginning in 1956, Bontecou attended the Art Students League in New York City and the following year won a Fulbright scholarship to study in Rome, where she met Alexander Calder. At this time, she developed her signature welding technique using wire and pieces of canvas shaded with soot applied with an oxyacetylene torch, in a series she referred to as “worldscapes.”

Back in New York in 1959, her work rapidly drew art-world attention, and her first solo show, at the Leo Castelli Gallery in 1960, was a critical and commercial success. In the following few years, she regularly showed internationally and began to pick up prizes, such as a top award, the 1963 Corcoran Biennial, selected by a jury including Conrad Marca-Relli, whose own patchwork abstract canvas compositions might recall aspects of Bontecou’s sculptures.

To receive such attention early on in an artist’s career has its drawbacks. Expectations are great, distractions are many, and pressures mount. While Bontecou withdrew from the art scene, her reputation remained intact. Speculation about her recent output, which she hadn’t shown in New York for a long time, increased with each passing decade. A certain mystique surrounds those talents who avoid the spotlight. Bontecou isn’t exactly the J.D. Salinger of contemporary art, but she resumed showing recent works only in the mid 2000s, in several well-received museum and gallery exhibitions.

Today, her work continues to evolve as she experiments with new sculptural forms along with an extraordinary range of works on paper. Drawing has always been central to her output, and it is currently the focus of a major survey, “Lee Bontecou: Drawn Worlds,” on view at the Menil Collection, Houston, through May, 11. Organized by the Menil and curated by Michelle White, the show travels to the Princeton University Art Museum (June 28-Sept. 21). The accompanying exhibition catalogue includes essays by White, critic and art-historian Dore Ashton and artist and writer Joan Banach.

Banach was a student of Bontecou’s at Brooklyn College in the 1970s, and since 2012 has worked with her professionally. Banach’s essay, “Lee Bontecou’s Ledger,” focuses on an astonishing notebook (ca. 1957-early ’60s), which Banach discovered while going through some of Bontecou’s early work for possible inclusion in the Menil survey. The sketchbook has never been exhibited until now. Filled with hundreds of drawings and sculpture studies, the ledger goes a long way to illuminate Bontecou’s thought process. Recently, I met with Banach at her New York studio to talk about Bontecou’s work and her extraordinary career.

David Ebony: You studied with Lee Bontecou at Brooklyn College. What was she like as a teacher?

Joan Banach: She was very open, very interesting to talk to. Her comments were not about the visual but more about the structural aspects of what I was doing, and also what she was doing. It was an honors workshop, in 3-D design. There were some unusual assignments. Once she asked the students to make, or engineer, a ceramic teapot. Over the years, as you might know, she has made some beautiful and perfectly functional porcelain teapots.

Ebony: In her most famous works from the 1960s, Bontecou seemed to be addressing issues of violence and war—the Cold War and the Vietnam War, specifically. Then abruptly, in the early ’70s, she appeared to shift her focus to nature themes.

Banach: I wouldn’t say she shifted her focus. Her focus was always that of a naturalist. Her work has always corresponded to issues of the day, situations and circumstances surrounding her—the war, space exploration, environmental issues. But it was always tied to a naturalist’s way of looking at things. It’s a way of looking at the world in terms of macrocosmic dimensions and also the very smallest elements of nature.

When I first visited her Pennsylvania studio, in 2012, the first thing she did was show me her collection of rocks and fossils. Then we looked at her garden. She has an extraordinary greenhouse for cacti, which you could say is the source of a lot of her ideas for recent sculptures, especially the “sandbox” pieces; a reproduction of one of them is included in the book.

Ebony: One of the most remarkable things about Bontecou’s career is the way she dropped out of the art scene in the early ’70s, at the height of her fame. She continued to teach, but she retreated to a quieter life in the country and didn’t show her work for many years.

Banach: A lot has been written about that. But I see it differently. It was in no way a retreat. Some have characterized it as a rejection of the art world, but I doubt that Lee thinks of it that way. In fact, I don’t think she thinks of it at all.

I can understand how all of the distractions of what goes on in New York City would be impossible for her to sustain. She is someone who has extraordinary focus. She can spend an enormous amount of time on a single element—for instance, on getting a specific color. She might spend ten years or more developing a certain tone of blue to add to one component of a sculpture. She allows herself that, which would be out of the question if she were under pressure to produce work for gallery shows on a regular basis.

Ebony: Can you talk a bit about the current show of drawings and how it evolved?

Banach: There has never been an exhibition of this scale devoted solely to Bontecou’s drawings. There is one sculpture in the exhibition, though. It’s a very large suspended sculpture from the 1990s, which is important to give the drawings context. Lee and I spoke about including drawings that have never been shown before, such as the one reproduced on the cover of the catalogue.

At Lee’s invitation, the sketchbook became the focus of my catalogue essay. It’s a used accounting ledger she found on the street, with some 80 pages full of drawings. The book’s not dated, but the drawings are from about the late ’50s to the early ’60s. It was the only bound sketchbook I saw in her studio. She has a lot of different compilations of drawings in folders and drawers, but this was unique. In the show, it’s on view in a vitrine, open to one spread. Hopefully, someday there will be a facsimile made.

Ebony: What does Bontecou say about the sketches? Do the drawings relate to specific sculptures?

Banach: The sketches refer to three dimensions, but they are schematic. Some are connected to the early camera-like structures she made in the late 1950s. Some correspond to the later suspended sculptures. But they are all more directly related to how she’ll build a work rather than what the final piece would look like. The drawings have to do with her process, transposed from two-dimensions to the bas-reliefs or freestanding sculptures. In the sketchbook, she’s exploring how to create these forms. You can see where she indicates, for instance, surges and recesses. The process is complex and dynamic.

It was a great thrill for me to go through the sketchbook with Lee, page by page. In the essay, I tried to stay as close to her voice as possible. She speaks very simply about her work. It’s all about how it’s done. There’s virtually no theory, and her statements are very modest. She has the instincts of an inventor. For her, the process is a kind of a continuum. One work evolves out of another.

David Ebony is currently a Contributing Editor of Art in America and its former Managing Editor, part of an association with the magazine that spans over 21 years. He has written for A.i.A. more than 450 signed articles, including features, reviews, profiles and news stories. He is also a senior editor-at-large for SNAP Editions, based in New York. He is the author of “David Ebony’s Top 10,” a long-running contemporary art column for Artnet.com, which is accessible on the Artnet web site. He was a Contributing Editor and writer for Lacanian Ink, (from 1998-2012), a journal of art and psychoanalysis. He served for two years (2002-2003) on the Board of Trustees of AICA, the Association internationale des critiques d’art, of which he is a long-standing member. He lives and works in New York City and Clermont, New York. Among his books are Anselm Reyle: Mystic Silver (2012); Carlo Maria Mariani in the 21st Century (2011), Dale Chihuly; Garden Installations (2011); Emily Mason (2006); Botero: Abu Ghraib (2006); Craigie Horsfield: Relation (2005) ; and Graham Sutherland: A Retrospective (1998).

Artist and writer Joan Banach received a Guggenheim Fellowship for painting in 2000. Her work is in the collection of the Stedelijk Museum, Amsterdam, and was featured there in “Kabinet Over Holland,” 2000, and “Tot Zo Fer/Up To Now,” 2003, an exhibition curated by then director Rudi Fuchs, which was accompanied by a catalogue raisonné of the Stedelijk Museum collection. She participated in “5 x 20 x 20,” in 2009–a series of talks by artists represented in the Judith Rothschild Contemporary Drawings Collection at the Museum of Modern Art, New York. Her work has been shown at The Kitchen, Robert Miller Gallery, Julie Saul Gallery, Art in General, and Small A Projects in New York. She also has held solo exhibitions at Galerie Lelong, Zurich, and at Mario Diacono Gallery, Boston. Banach lives and works in New York City and Nassau, New York. 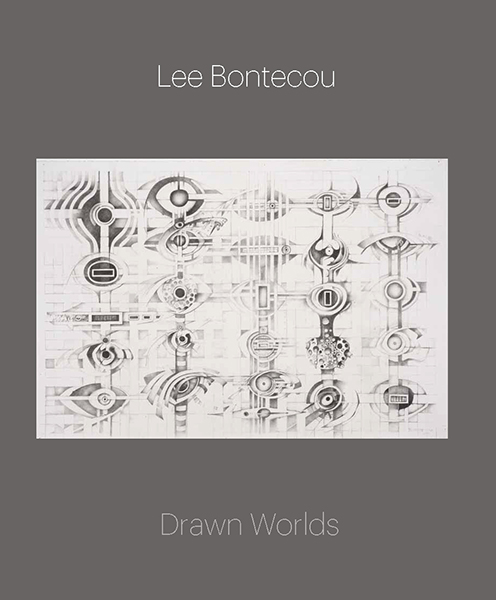