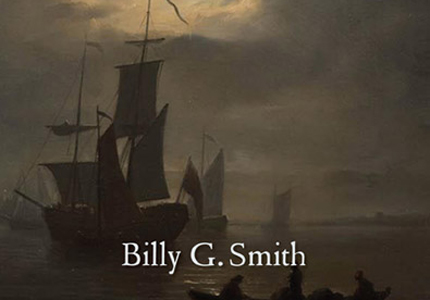 In 1792, the Hankey left Britain full of abolitionists who hoped to establish a colony free of slavery in West Africa. Botched negotiations with local tribes and the failure of the colony sent the Hankey on a trip around the Atlantic with a terrible infestation of Yellow Fever. Billy Smith follows the journey closely in Ship of Death: A Voyage That Changed the Atlantic World, recording both the experiences on deck and the larger impact of the pandemic it spread on the politics of the newly formed United States, the Haitian Slave Rebellion and more.  As the nation reflects on the legacy of slavery during Black History Month, we would like to share the following excerpt from Smith’s book in which the antislavery colonists first reach the island of Bolama, off the coast of West Africa. 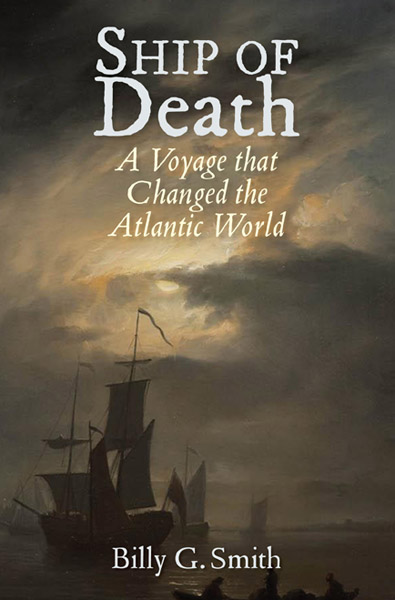 “Whether poor or rich, all the participants in the Bolama adventure were caught up in the swirl of the revolutionary era. The expedition emerged from a ferment of radicalism and reform that typified much of the transatlantic world during the last quarter of the eighteenth century. In North America in 1776, in France in 1789, and in Saint- Domingue in 1791, millions of people engaged in violent rebellions that transformed their societies fundamentally, with the general goal of making all people more equal.

The Hankey set sail for Africa in the spring of 1792 within this political context. The idea for the expedition had grown out of the radical and reformist movements, but the conservative governmental backlash had set in by the time the ship sailed. Even if the British government did not support their venture, many of the Bolama colonists were still proud of their nation and its ideals. Some of their antislavery motivation emerged from the notion that “British liberties” should be extended to the entire globe. Yet as part of their humanitarian spirit, the Bolama migrants intended to impose their political, cultural, and religious ways of life on African peoples. Unfortunately for them, most Africans had little desire to have their lives transformed by outsiders, even well- intentioned ones.48

Shortly after their arrival, Dalrymple sent several boatloads of armed men ashore to explore what he believed was an uninhabited island. The appeal of solid ground and a chance to see their new home was too great for the colonists, weary of confinement on the ship. Dalrymple initially pleaded with them to stay on board, but discipline quickly broke down as eager pioneers swarmed ashore to search for water, escape their cramped quarters, and find fresh food. Dalrymple was an easygoing dreamer rather than a hard- driving disciplinarian, and he could not control his passengers.

During their first “jovial day” on the island, they rejoiced in their good fortune, hoisted the British flag, and, disregarding their constitutional pledge to purchase Bolama from the Africans, took possession of the land for the British king. The future of their enterprise seemed worth celebrating. Each male settler, as one of them wrote, “flattered himself with the pleasing idea of acquiring, by his industry, a sufficient fortune to enable him, in a short time, to return to his native country in a state of independence.”5

On the same day they claimed the island, the settlers spotted a small craft in the distance. Rowing furiously in their jolly boat to catch it, they came even with the craft, which contained six Africans, who informed them in a Portuguese Creole language that this was indeed the island of Bolama. However, they cautioned, the British should not stay there until they held a palaver with the owners, Canabacs, “who were very hostile to Europeans.” The Canabacs lived on a nearby island and belonged to the larger ethnic group of Bijago inhabiting the archipelago. The colonists—actually invaders at this point, since they were occupying somebody else’s land—understood neither the African men’s language nor their own personal danger.6

As more than one person has observed, history makes fools of us all. The Bolama colonists could have served as models for that aphorism. Even when three dozen armed African men appeared the next day off shore in a canoe, the colonists were not upset, at least not sufficiently to take precautions. Despite British engagement in the slave trade for more than a century, the colonists knew virtually nothing about Africa or the peoples who lived there. No one in the expedition except Dalrymple had ever set foot on the continent.

In stark contrast, Canabacs and their fellow Bijago across the archipelago knew Europeans all too well. They had been among the first Africans kidnapped and enslaved by white foreigners in the fifteenth century. They had a long history of interactions with British, continental European, and American ship captains and merchants. During the first century of contact, European traders often were powerful enough to seize what they wanted by force, and they had no scruples about kidnapping free people and selling them into slavery. Many of the foreigners had routinely plundered and destroyed Bijago villages if their efforts to obtain slaves were thwarted. However, Africans gradually began to take control of their interactions with the new intruders. Unlike the Vincheai in the Canary Islands, the Bijago had the immense benefit of adjusting to Europeans over a long period. They learned important lessons from the frequent incursions. They kept all but the most aggressive intentions of the visitors at bay through trade and alliances, and they waged war with those who could not be appeased. The Bijago developed a reputation for considerable military prowess, which they employed against both Europeans and Africans on the continent as they deemed necessary. As a result, they were able to maintain an independent homeland well into the nineteenth century.9

The people on Canabac Island grew alarmed when they saw the fires raging on Bolama, and they set off to investigate. They discovered a peculiar tribe of white people cutting down trees, constructing huts, burning grasses, damaging rice fields, and disrupting wildlife— all on an island where Canabacs had hunted and gathered food for generations. It required no great leap of imagination to conclude that these strangers had come to take their land. Canabacs knew very well how to respond to white predators. They would repel the intruders from their shores.

Ironically, and certainly unknown to them, the antislavery colonists had chosen an island that lay at the heart of the region where the Atlantic slave trade had begun. After the Portuguese tried unsuccessfully to conquer the Vincheai in the Canary Islands, northwest of the Bijago’s homeland, they established an outpost on an unoccupied island of the Cape Verde archipelago south of the Canaries. In 1446, two Portuguese ships, commanded by Gil Eannes and Nuño Tristão, became the fi rst Eu ro pe an vessels of record to sail down the West African coast as far south as the Bijagos Archipelago. They were equipped with the new technology of the movable lateen sail, which they had picked up from Arabs. These sails would enable them to tack into the strong northern headwinds on their return to Portugal. Eannes and Tristão landed at the Bijagos Islands to buy ivory, pepper, and gold— commodities (along with a few slaves) that West Africans and Europeans had been trading overland for centuries via caravans across the Sahara.1

After exchanging goods with Africans in the region, the two captains attacked a Bijago village, kidnapping a handful of individuals and carrying them back to Portugal as slaves. It was a suitably brutal beginning for one of the greatest crimes in world history.2 Hundreds of European explorers around the world, including Christopher Columbus, would continue this tradition of kidnapping indigenous peoples to take home to display, present as gifts to kings and queens, or use as bound servants.

As early as 1526, slavers began to sail regularly between Africa and the Americas. Portuguese and Spanish slavers initially bought Africans from the Upper Guinea coast, the region encompassing Bolama. During the seventeenth century, the slave trade expanded substantially to meet the labor demands of the plantations in the West Indian sugar islands and Portuguese Brazil. Slavers transported the largest number of captives from Upper Guinea in the seventeenth and early eighteenth centuries. At the same time, they started to work more intensively south of Bolama, especially in the Bight of Benin and the Bight of Biafra. The number of enslaved people forced across the Atlantic Ocean by the two Iberian powers rose sharply from the end of the eigh teenth century until the end of the slave trade in the second half of the nineteenth century. However in total, only 4 or 5 percent of Africans transported as slaves across the Atlantic came from the regions near Bolama.3

Both the Bijago and the colonists were compelled to conduct their lives within the framework of imperial expansion, industrialization, and, crucially, the slave trade, striving to maintain their communities and cultures against a vast array of forces, both local and international. The British colonists, pulled to Africa by altruism and avarice, were also pushed from their homeland by a variety of problems that afflicted their communities, the region, and the larger Atlantic world. Over the centuries, the Bijago had developed creative strategies to deal with the growing importance of buying, selling, and slaving, while at the same time resisting capture and transportation themselves. One mistake might condemn an individual or an entire village, along with all their future off spring, to a lifetime of slavery. Neither the Bijago nor the British were able to act completely independently of the intermeshed economic, political, and social networks that framed their choices. In that sense, the struggles of the two groups had parallels, even as there were also vital differences.

The colonists did not have to fear the brute power exercised by well- armed slavers in Africa. The Bijago had the home- field advantage, local knowledge, an advantage that they successfully defended for a long time. If measured by sheer longevity, the Bijago held their own against the Europeans who initiated the Atlantic slave trade in the region, certainly for a far longer period than the Vincheai. The Bijago were able to control many of the aspects of their existence for more than four centuries. In stark contrast to the Bijago’s local knowledge and centuries of dealing with Europeans, the colonists knew nothing of the region or its history, which played no small part in their inability to found a successful settlement. The changing nature of commerce, cooperation, and strife with their neighbors on the nearby African coast played a significant role in the Bijago’s ability to manage their affairs.”

Excerpted from Ship of Death: A Voyage that Changed the Atlantic World. Copyright © 2013 by Billy G. Smith. All rights reserved.