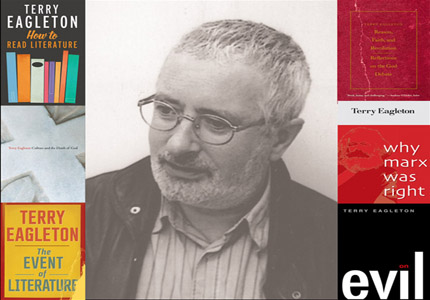 Fifty years ago, Terry Eagleton—one of the foremost and polemical cultural critics and literary theorists—was appointed Fellow in English at Jesus College, Cambridge shortly after graduating from the university himself with a First in English. He was the youngest fellow in the history of the college since the eighteenth century, and he hasn’t stopped working at such an accelerated pace. While accepting professorships in the U.S, the UK, and Ireland (not to mention countless guest speaker appearances worldwide), he has published more than forty books that cover topics across the board, perhaps because, as he joked to The New York Times, “I don’t actually read other peoples’ books. If I want to read a book, I write one myself.” From literary and political theory; cultural criticism; and religion to memoir; screenplays; theater; and fiction, Eagleton has nearly done it all, leaving his mark in many areas of intellectual discourse.

Eagleton has set foot on both banks of the divide when it comes social and cultural matters. Though born in England, he is of Irish ancestry and despite feeling very English he published a trilogy examining Irish history and culture. On a social level, he is very open about his working-class upbringing even though he attended and has worked at the most prestigious universities in the United Kingdom and beyond. And in terms of religion, Eagleton is a lapsed Catholic (though his childhood avocation was as Gatekeeper, an altar boy who escorts novice nuns as they make their vows) but has made headlines for defending the existence and purpose religion and his heated attacks on well-known New Atheists.

His fist major work Literary Theory: An Introduction became an international academic best seller and is now a staple in many literature classrooms. But his career would lead him into other genre of intellectual discussion, such as religion and political theory. Eagleton’s relationship with Yale University started in the mid-2000s when he was the Terry Lecture series speaker in 2008, where he talked about faith, fundamentalism, and the influence of Richard Dawkins. The book Reason, Faith, and Revolution—based on the lectures—was published shortly thereafter. Two years later, YUP published his book On Evil, in which Eagleton analyzes our culture’s evolving relationship with and perception of evil, which has shifted from religious “sin” to a more secular form, “transgression.” Shifting away from theological discussion, his next venture with YUP would be about Marxism (which has interested him since his university days as an influential member of the Leftist Christian magazine Slant) titled Why Marx Was Right. That same year, he also released the book The Event of Literature, which goes back to his academic roots in literary theory (though he started out as a Victorian literature scholar). In a similar vein, Eagleton completed the book How to Read Literature, which was published last spring and provides an insightful guide for students studying literature or for those looking to deepen their reading experiences with books read for pleasure. His latest publication with us, Culture and the Death of God, comes out this spring and marks a return to his study of atheism and religion in our post 9/11 culture.

Eagleton frequently revisits topics he’s previously studied in his career to flesh out more analysis on the topic or reexamine it from a different perspective. Regarding his Catholicism, he admits that “there is still the old Joycean question of how far you can walk away from something culturally imprinted on you so deeply,” but the same could be said about his longstanding and close relationship to literary and political theory. That said, Eagleton looks to see that the essential questions about these subjects are constantly reexamined in the evolving culture around us. Describing his work is difficult to pin down in one or two words because it would suggest boxing him in a way that he appears to have resisted throughout his life, perhaps because in continually transgressing mainstream categorization he ensures a steady stream of debate and discussion to reveal novel insights.