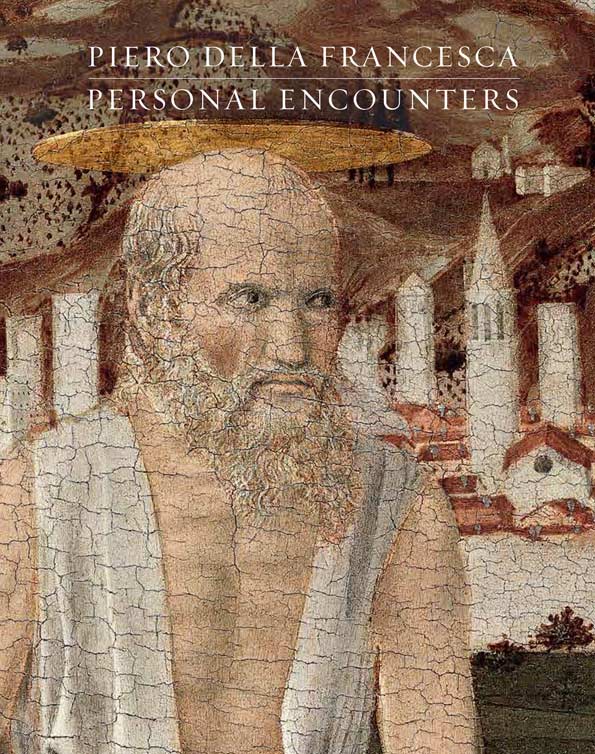 The Metropolitan Museum of Art generously shared following post with the Yale ARTbooks blog. See the post on their blog.

Piero della Francesca: Personal Encounters, a new catalogue by Keith Christiansen—the John Pope-Hennessy Chairman of the Met’s Department of European Paintings—is the first publication to explore the private devotional works of one of the Renaissance’s great masters. Published in conjunction with the eponymous exhibition (on view through March 30), the appropriately small book matches the intimate exhibition, which focuses on one of the gems of the Gallerie dell’Accademia in Venice: Piero della Francesca’s Saint Jerome and a Supplicant, a work that has long mesmerized Christiansen, and has never before left Italy. I sat down with him to discuss this work and why he felt compelled to put this show and publication together.

Nadja Hansen: This is the first time that Piero’s private devotional images are being singled out from the rest of his oeuvre and focused on exclusively. Why has this never been done before?

Keith Christiansen: With the exception of his Flagellation of Christ in the Ducal Palace of Urbino, Piero is famous for his larger, public works—the Montefeltro Altarpiece in the Brera in Milan, the True Cross fresco cycle in Arezzo—and each of these works has become an art-historical reference point around which scholarship on the artist has developed. Art history is a funny discipline in this way: Certain works are studied and written about, and then other scholars research those works further and either develop or dispute what previous scholars have said. In this way, the discipline creates its own trajectory, sometimes passing over the artist’s other works. In the case of Piero, the four pictures featured in this exhibition simply have not been at the center of studies of his work.

Nadja Hansen: In your careful analysis of these four paintings, were you able to flesh out a deeper understanding of the artist’s body of work as whole, or draw any insights about how his private devotional images differed from his larger public works?

Keith Christiansen: What’s really wonderful is that these four works actually cover Piero’s entire artistic career, through time and geographical displacement. We see the whole trajectory of his career. Madonna and Child is probably his earliest surviving work, and on the back of the panel on which it is painted he experiments with a perspectival system he would likely have encountered when he first came to Florence. Saint Jerome in the Wilderness dates a decade later, when he was working in the coastal town of Ancona; it is one of only two dated works and was painted for a cloth merchant. Saint Jerome and a Supplicant dates more than a decade after that and may have been painted in Venice; in it we see him mastering the problem of a deep landscape setting. And lastly, Madonna and Child with Two Angels is later still and painted in Urbino; it seems influenced by the Northern masters he would have encountered at Federico da Montefeltro’s sophisticated court.

So in these four works we see his interest in different challenges at different times over the course of his career. And yet, we also find those larger themes that remain constant in Piero’s work—that interest in geometrical precision, and an effect of timelessness as well as of particularity. Archival research has also provided a lot of new information about the family of the patron of one of the paintings, so both the catalogue and exhibition certainly contribute to the larger analysis of his work. Overall, I believe this will be a focused exhibition of small pictures that poses much larger questions.

Nadja Hansen: You say in the catalogue that Saint Jerome and a Supplicant is one of the “most haunting and least studied” of Piero’s paintings. What is it about this work that so fascinates you?

Keith Christiansen: Imagine that you’re in Venice and you go to the Galleria dell’Accademia, where this work is. What have you planned to see? The Venetian greats, of course. You have all of those marvelous works by Bellini and Titian and Tintoretto. But then there’s this little Piero displayed in the corner of one of the rooms. It’s a picture I’ve stood in front of, totally mesmerized. But, although it has captivated me, I am willing to bet that most people miss it completely. I think this is a reminder that you go places and miss things when you have a set of predetermined goals in mind. One of the things I hope this catalogue may do is to remove that isolated Piero from its little overlooked corner and make it the viewers’ goal.

This picture is critical because it demonstrates, for me, Piero’s incredible ability to embrace both the particular and the general—carefully observed detail, perfectly studied geometrical space, beautifully rendered exactness of place—and yet create a quality of timelessness. What he is able to depict is a seemingly casual and impossible encounter that the picture resolves into something formal and eternal. These dichotomies are resolved into a timeless vision through Piero’s use of geometry and light. The shadows in these pictures have obsessed me. The projection of shadows is so fascinating—I believe Piero was among the earliest artist to apply the laws of perspective to the projection of shadows, and he does it for visual effect.

For example, there is the wonderful detail of the shadow cast by Jerome’s legs that leads the eye of the viewer to the pages in his open book fluttering in the breeze, thus creating an effect of something occurring in real-time. Piero freezes that moment and examines it: The moment is extracted from the continuum of time and given permanence by the stillness of the work, much as in a Vermeer. There is a pervasive sense of otherworldly serenity and tranquility, and yet the landscape has a strong quality of “thereness,” by which I mean that anyone who has visited the area around Sansepolcro, where Piero is from, will immediately recognize the locale. More importantly, the two figures who lock eyes in intimate communication are not from the same era, as is evidenced by their clothing, so you have an intersection of time. Additionally, there’s the viewer observing from a different context, entirely their own and entirely “now.” This picture embraces a confluence of all of these things; it is a timeless encounter that crosses centuries, yet is specific.

The compositional harmony of nature and humankind—expressed in the trees, the dirt road, the hills, flowers, tree trunk with a cross, in the city, castle, distant homes, bricks, and the carved crucifix—is brilliant and novel. The landscape is filtered through Piero’s mind, which was always seeking geometric perfection and which understood the order of the world through mathematics. This work very clearly demonstrates that painting was Piero’s means of investigating the mathematical laws of nature.

These interactions within the work are what make it so fascinating to me.

Nadja Hansen: This work was recently cleaned and conserved. What became newly evident to you after the discolored varnish had been removed?

Keith Christiansen: The picture has been totally transformed. The crucifix on the left side of the picture is something that now reads much clearer, and this is important for our reading of the space of the picture. I also don’t think that I previously noticed details such as the little drops of blood that run down Christ’s arm, or that the plants in the background are very clearly identifiable as oak trees and scotch broom in full flower. It was also less clear that the donor figure is wearing a rose-colored robe with a vermilion scarf (actually a hat with a trailing cloth tail). The painting had such a tinted varnish that those two details seemed almost shades of the same color. But, really, they are two separate items of clothing that Piero clearly meant to delineate.

Nadja Hansen: The Frick recently held an exhibition on Piero; what was your impetus to produce this exhibition now?

Keith Christiansen: The Foundation for Italian Art and Culture approached me about doing a one-picture exhibition. We would clean the Saint Jerome and a Supplicant and do a focused show on that work. But I then started thinking about the private devotional works, of which this was one, and how they are small and meant to be seen at close range, rather than on a distant wall or altar. They are masterpieces that invite close study and juxtapositions. When, for example, you get up close and look at the Madonna and Child with Two Angels, you see within the shaft of light illuminating the room beyond the doorway that Piero has painted motes of dust suspended in the air. What does this mean for us? It means that, in addition to the fairly conventional religious subject of the painting, there is the artist recording the miracle of light with an acutely analytic eye. This kind of intimacy invites a very different experience, I believe, which is why we have titled the catalogue Personal Encounters. Everyone will take away something different.

People are free to make their own comparisons between what we will display and what The Frick demonstrated in February; in fact, I encourage the cross-reference. But, I believe that it is very important to keep in mind that this exhibition is unique: It offers the occasion for a meditation on one aspect of Piero’s work.

It’s also an added advantage that none of these pictures has ever been shown in the United States and that they have rarely been lent. This is very much an opportunity for us. It’s new.

Nadja Hansen: Piero is famously known for his interest in science and his scientific approach to painting. How do you reconcile this highly scientific man with his work which you say, “depicts the timeless imminence of the Divine” and “captures the mystery of revelation.” Can you talk about this dichotomy?

Keith Christiansen: For those of us who study the art of the past, there is always an awareness of the ways in which your assumptions influence what you see. Our worldview is a constructed view. The same was true for Piero and his patrons; closely studying these small works, we start to understand that world. What counts is not so much what the subject is as how it’s treated. Piero was interested in light and optics. Had he worked in the seventeenth century, he would probably have been a painter of church interiors, like Saenredam, and in the eighteenth century he might have painted hushed genre scenes, like Chardin.

It’s important to remember that long before the great advances in the science of optics in the seventeenth century, artists had recorded complex optical phenomena in their paintings. Their subject matter may have been predetermined—classical myths and religious themes—as there were only so many choices, but that was not a limiting factor for an inquisitive mind. Think of Leonardo da Vinci. If painting today sometimes seems less rich than it was in the fifteenth century, this is because a person like Piero—someone deeply committed to the study of mathematics, geometry, and optics—would not necessarily have become an artist. Perhaps he would be a computer nerd. But, being born then, when painting and science, and specifically optics, were deeply entwined, art was the obvious choice.