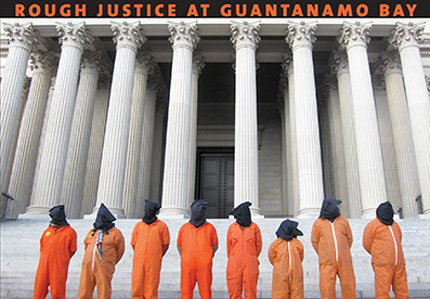 Listen to the podcast interview for The Terror Courts on iTunesU!

Jess Bravin’s The Terror Courts: Rough Justice at Guantanamo Bay has won numerous accolades for debunking presumptions like these about Guantanamo Bay and the military commissions. Terror Courts was a 2013 top political book pick by many, including the Washington Post and Publishers Weekly. Rolling Stone called it “captivating,” the New York Times labeled it a “welcome addition to the history of national security legal policy dilemmas in the Bush era.”

With The Terror Courts releasing in paperback this month, we are pleased to share an excerpt from the conversation between YUP Director John Donatich and Bravin. Guantanamo Bay once garnered enough public attention that then presidential candidate Barack Obama made closing the detention camp a campaign promise. John Donatich asks Bravin about the potential for sustained public outcry as the detainees cases drag on in the permanent military commissions:

John Donatich: What do you think now, with the hunger strikes getting more attention, at what point do you think Guantanamo will be an issue that Congress has no choice but to address, and will there be any kind of sustained public outcry against what’s happening?

Jess Bravin: Well there is no public outcry against what’s happening there that I can tell, there are certainly people that have been concerned about it, but it’s not an issue that motivates mass attention in the United States.

I think that if the congress remains as it is now—divided partisan control in the two chambers, and no constituency for addressing Guantanamo, it’s hard to image much happening from Capitol Hill. I think the initiative lies almost completely with President Obama. In his first term he was willing to expend zero political capital towards his campaign promise of closing Guantanamo and significantly altering the way that military trials worked—well, he did alter the way military trails work on paper, I have to say that. He did sponsor legislation that did afford defendants greater protections than they had previously, but in terms of closing the place and just closing the book on this post 9/11 experiment in parallel justice, he hasn’t really done anything to accomplish that after discovering there was some political price to pay for trying back in 2009.

Listen to their complete conversation on the Yale Press Podcast, now available through Yale University on iTunesU.