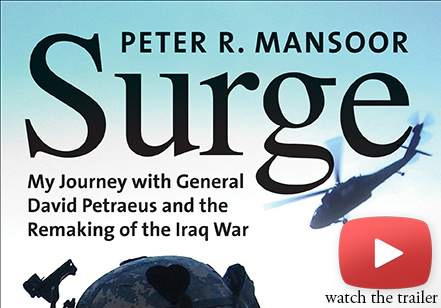 On March 20, 2003, coalition forces led by the United States and the United Kingdom invaded Iraq in what is still seen as a highly controversial decision made by the United States and its allies to “end the regime of Saddam Hussein” and to eliminate what were allegedly weapons of mass destruction in the possession of the Iraqi government.   On May 1 2003, President George W. Bush delivered his “Mission Accomplished” speech proclaiming the end of major combat operations in the war. Instead, it was only the beginning of the insurgency that has lasted to this day. 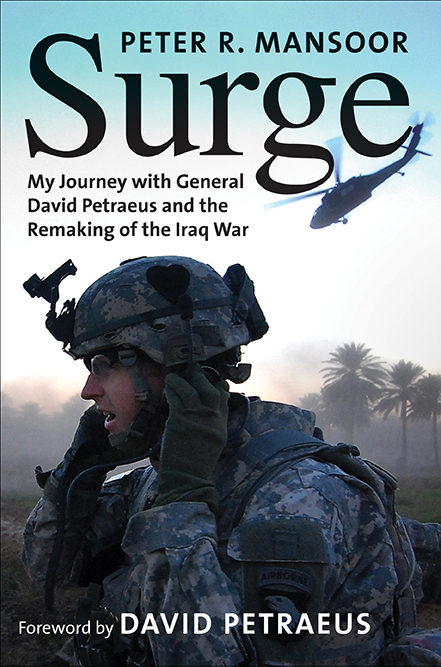 Retired US Army colonel Peter Mansoor, author of Yale University Press titles Baghdad at Sunrise and Surge: My Journey with General David Petraeus and the Remaking of the Iraq War, formerly served as executive officer to Petraeus, who was commander of Multi-National Force-Iraq from 2007 – 2008.  But Mansoor is an educator, too; currently he holds the position as General Raymond E. Mason, Jr., Chair of Military History at Ohio State University In writing Surge, he observes:

The misinformation and ignorance—among the general public, in the historical community, within the halls of government, and even in the military—about why the surge in Iraq succeeded is somewhat disheartening. Indeed, a number of pundits still refuse to admit that the surge had anything to do with the reduction of violence in Iraq. The American people need a more comprehensive account of the Iraq War during the years of the surge, one written from the inside perspective of a member of General Petraeus’s team.

Using newly declassified documents—including Petraeus’s own papers— unpublished manuscripts, interviews, author notes, and published sources, Mansoor‘s account of the 2007-2008 surge is the first to fully address not only insider events and knowledge alongside journalistic reporting in the media, but also information presented in the body of literature recently published on the topic of the Bush administration’s handling of the war. The results of Mansoor’s “perspective that time alone can provide” are synthesized in the book, and in fascinating detail he tells the on-the-ground story of what might yet become one of the most famous turning points in American military history. Watch our video trailer with the author and get started on the withdrawal from misinformed status.