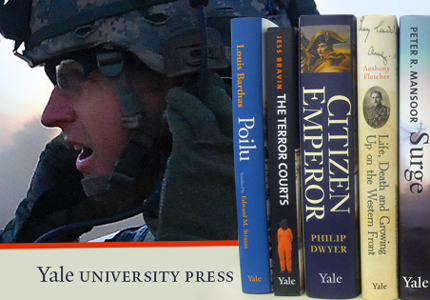 Although it may be an uneasy topic, the discussion of war, military studies, and the related political and governmental histories and current events are a vital part of the cultural conversation to which Yale University Press authors contribute.

Now out in paperback, Wall Street Journal  Supreme Court correspondent Jess Bravin’s The Terror Courts: Rough Justice at Guantanamo Bay covers the Guantanamo Bay prison camp since its inception reports on the legal, political, and moral issues that have stood in the way of justice. Read an excerpt and listen to the Yale Press Podcast interview with YUP Director John Donatich, now available on iTunesU.

On the 11th anniversary of the Iraq War, we posted about Peter Mansoor’s Surge, accounting for his time served during he turning days of the conflict in 2007-2008, in the final days of the Bush administration. Mansoor writes: “The American people need a more comprehensive account of the Iraq War during the years of the surge, one written from the inside perspective of a member of General Petraeus’s team.”

And for the 2014 centennial, the relentless progression of World War I and the devastated wartime landscape of Flanders Fields are presented in unprecedented detail in Birger Stichelbaut and Piet Chielens’s The Great War Seen from the Air in Flanders Field, 1914-1918, a unique historical record comprised primarily of aerial photographs taken over the bitter four-year course of the Great War. Visit the Yale ARTbooks blog for image details of the trenches and bunkers seen from above.

Two books of letters from the western front are now available: Life, Death and Growing Up on the Western Front, written from historian Anthony Fletcher’s discovery of his grandfather’s letters and French Corporal Louis Barthas’s writings, translated by Edward M Strauss in Poilu: The World War I Notebooks of Corporal Louis Barthas, Barrelmaker, 1914-1918, one of “This Week’s Hot Reads” for the Daily Beast (along with Michael Coogan’s The Ten Commandments, an upcoming feature in our April “Ancient Texts, Modern Beliefs” theme).

One hundred years before the Great War put two notable generals in direct conflict, and two new biographies, Rory Muir’s Wellington: The Path to Victory: 1769-1814, and Philip Dwyer’s Citizen Emperor: Napoleon in Power, the second volume in his study of France’s most notorious general,  illustrate one of the greatest military rivalries of modern history.

We were saddened to learn of the passing of Tennent Harrington Bagley in February; Bagley had been the author of Spy Wars: Moles, Mysteries, and Deadly Games and a guest on the Yale Press Podcast in 2007. Read our full obituary here.

Kristie Macrakis is the author of the new YUP book, Prisoners, Lovers, and Spies: The Story of Invisible Ink from Herodotus to al-Qaeda—the first history of invisible writing, uncovered through stories about scoundrels and heroes. Read an interview with the author and learn about the spy wars, chemical discoveries, and famous characters that make up this hidden history.

In Through a Screen Darkly, Martha Bayles explains the use of popular culture, politics, and the projection of America’s global image  — our post on “The Urban Singles Comedy and Public Diplomacy” covers the perspective on popular shows like Friends, Sex and the City, or Desperate Housewives and their role in the culture wars of America as seen from abroad.

Be sure to sign up by this Friday, April 4, to receive our March “War!” e-newsletter, with a special discount on all the titles discussed this month on the Yale Press Log, and more!