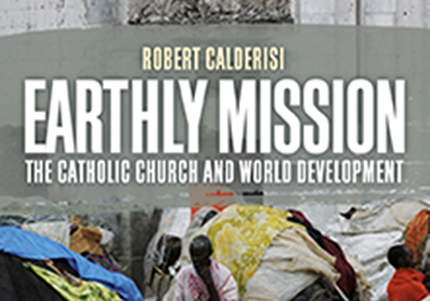 Last week, President Obama and Pope Francis met for almost an hour in a much-anticipated private visit in which they discussed, among other issues, income inequality and global peace. Indeed, in his first year as Pope, Pope Francis has emphasized the necessity to care for the poor, both from the standpoint of the Church and in political terms. This special emphasis on the plight of the poor has touched many, and drawn particular attention to the Church’s role in addressing these needs. In his book Earthly Mission: The Catholic Church and World Development, Robert Calderisi places the role of the Church in global and historical context. This book takes on the Catholic Church’s practical role in developing nations, particularly in the last 60 years. In so doing, Calderisi touches on the relationship between religion and politics, the economy, and social progress. 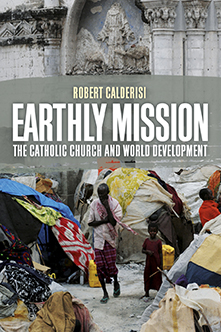 Indeed, in looking at both individual people and official institutional practice and dogma, this book obliquely raises the question, “What is the Church?” The tension between the institution and the individual occurs throughout Earthly Mission, in ways one wouldn’t always expect. The institution has often, but not exclusively, played a “conservative” role; in fact, the term “conservative” takes on wider meaning than a distinct place on the political spectrum. There are institutional, national, and economic issues at stake in the meeting between the Catholic Church and international development, not to mention the actions of persons outside the institution.

In addition to keen historical and economic investigation, Calderisi draws from the stories of people he met in fourteen developing nations from Rwanda, to Argentina, to Bangladesh. He speaks to cab drivers in Italy, economists in the Philippines and pastors in Tanzania. This approach gives Earthly Mission the insight that comes from individual experience alongside broader analysis with hard data.

The scope of the Catholic Church’s role in world development is vast and complex, and Earthly Mission includes the range from hopeful moments where poverty has been alleviated and to the most difficult ones. Calderisi examines heartbreaking moments in world history, such as the horrors of the Rwandan genocide in the 1990s. Calderisi speaks to those who were there and grapples with the incomprehensible violence.  “Church leaders did nothing to prevent the butchery,” he explains, “and some even seemed to encourage it.” The heroism of some individuals is set up against failures of courage on the other. Priests, nuns and lay Catholics all participated, some as victims, others as perpetrators.

In the end Earthly Mission provides a dynamic picture of the intersection between religion and politics and the diverse ways that appears in different places on the globe. It is in part a story of the Church’s institution meeting governmental institutions, and the individuals in between. “Diverse and all too human in its internal organization,” Calderisi writes, “the Church has varied greatly in its responses to social challenges. Vagaries of character, pressures of circumstance, and instincts of self-preservation have sometimes won out over the eternal truths to which it is dedicated.” Laying his cards on the table, Calderisi himself does not give up hope for the Catholic Church, yet leaves the story open for readers to draw their own conclusions as to whether the Catholic Church, as a whole, has been a force for good.