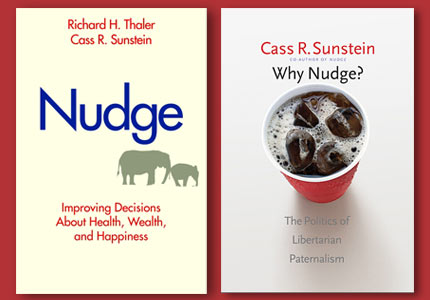 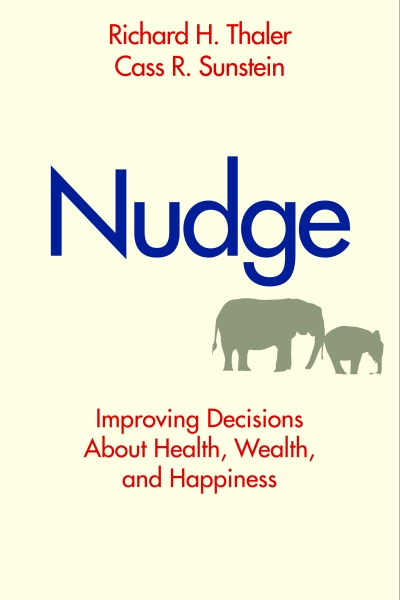 Read the profile of Cass Sunstein in the May 2014 issue of The Atlantic!

From last minute impulse buying at the grocery store to the way we treat the environment, it goes without saying that we are sometimes prone to making decisions that are not in our own best interest. Sometimes we know intellectually that these decisions won’t ultimately make our lives better, while other choices we make out of a lack of awareness about the consequences. According to the authors of Nudge, Cass Sunstein and Richard Thaler, this is part of our humanity. We make mistakes that do not improve our lives due to natural biases. We are simply susceptible to these kinds of lapses as humans, and this has interesting consequences for politics and the individual. Ultimately Sunstein and Thaler propose an outlook that starts from that premise: we will err, so how can things be designed so as to ensure the best result for ourselves? Through analyzing how we approach decisions, we can arrange our environment in a way that is conducive to choosing things that will benefit ourselves and our communities in the long term. This kind of “choice architecture” is the “nudge” to which the title refers. Crucially, it does not remove freedom of choice in these scenarios, but looks to creating situations in which we are more likely to choose those things will make our lives better. 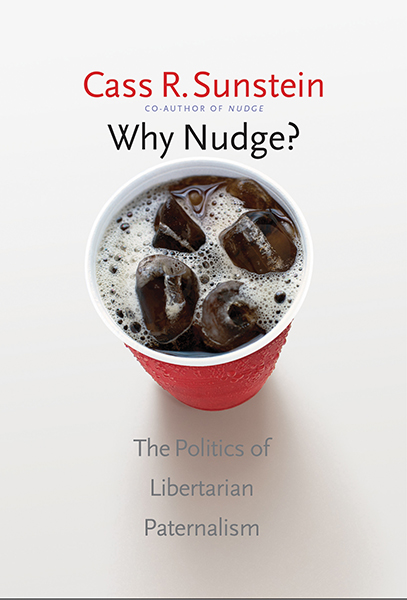 In his new book, Why Nudge?, Sunstein — professor and former Obama administration official — takes this approach further to defend and clarify how we can embrace about this kind of paternalism. He admits that the concept of paternalism is sometimes controversial. “Paternalism stirs strong emotions,” he writes. “Many people abhor it. They think that human beings should be able to go their own way, even if they end up in a ditch.” Why Nudge explains how we can responsibly approach guiding people toward more beneficial choices, and how the effects of those healthy choices spread through the community. Sunstein takes issue with John Stuart Mill’s Harm Principle that asserts, “the only purpose for which power may be rightfully exercised over any member of a civilized community, against his will, is to prevent harm to others.” That is, an individual’s own well-being is not a good enough reason to limit his or her autonomy. Yet Sunstein shows how we can honor people’s freedom while taking into account their tendency to veer from what would help them.

In short, Sunstein demonstrates that “in certain contexts, people are prone to error, and paternalistic interventions would make their lives go better.” Sunstein also acknowledges the limits of paternalism. One such issue is simply the diversity of human lives; what is “good” for one person at one time is not necessarily good for the other and one size does not fit all. Still, he notes the way in which being required to wear a seatbelt, or being disallowed from texting while driving applies to the welfare of the majority of the population, no matter how diverse. Indeed, Sunstein does not dismiss Mill’s argument on all grounds, rather he seeks to show how it is not always right, that indeed there are times where paternalistic interventions are a preferable option and should thus be considered.