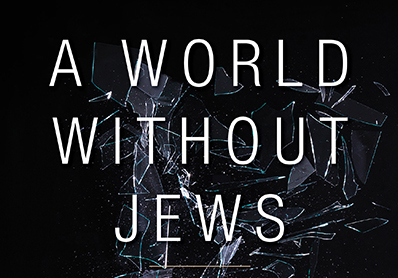 Alon Confino‘s A World Without Jews: The Nazi Imagination from Persecution to Genocide centers itself around an important question: Why exactly did the Nazis burn the Hebrew Bible everywhere in Germany on November 9, 1938? The events of Kristallnacht have not been adequately accounted for by historians in their large-scale assessments of how and why the Holocaust occurred, Confino argues. He draws on an array of archives across three continents to propose a penetrating new assessment of one of the central moral problems of the twentieth century; tracing the stories the Nazis told themselves about their past and destiny, Confino proposes a penetrating new assessment of the Holocaust, showing how a world without Jews was conceivable and imaginable before and during the war. Below you can read an excerpt on the book as a primer for our further discussion of the book when we post more for Jewish American Heritage Month in May.

The imagination of a Germany without Jews links anti-Semitic actions and ideas in the prewar and war years because it describes Nazi anti-Semitism as a work in progress, built gradually over the years between 1933 and 1945. I thus challenge the mainstream view in popular and scholarly understanding of the Holocaust that the mass murder of the Jews during the war had not been anticipated, that victims and perpetrators alike scarcely believed what was happening, that it was unimaginable and unrepresentable. Primo Levi expressed this idea in one of the twentieth century’s most profound statements: “Today, at this very moment as I sit writing at the table, I myself am not convinced that these things really happened.”8 The sentiment cannot be denied. At the same time, historians know that all that happened was, in some way, somehow, imagined, not literally, not exactly, but it was put into images and words that made it possible. No historical event springs from thin air, none is unique, because this implies having no links to context, past, and present. Of course, on November 9, 1938, no one could imagine the gas chamber of Auschwitz, not even Hitler himself. But on that day one could imagine a German world in which Jews and Judaism were terminated by fire and violence. Our aim is to seek patterns of meaning and purpose in a world of fantasies that made the extermination possible precisely because it was, somehow, imaginable and representable.

The Nazis imagined the Jew by using anti-Semitic ideas from their present-day German society. This statement may seem obvious, but it has consequences for our understanding of the Holocaust. A key approach to the Holocaust has been to focus on anti-Semitism as the primary motivation of the Nazis and to view Nazi racial ideology as the modern form of the old hatred. On one level, this argument is unassailable, for any account of the Holocaust that denies or minimizes anti-Semitism is bound to be unsatisfactory. But beyond this broad agreement, my argument here is in some respect fundamentally different from some trends in the anti-Semitism approach to the Holocaust. A central tenet of many studies of this approach, explicitly or implicitly, has been that an accumulation of the ancient hatred through the centuries paved the way and ultimately produced the Holocaust. I argue the opposite. It is not that the past (of anti-Semitism) produced the present (of the extermination), not that the ancient hatred led to the Holocaust, but that the Nazis interpreted anew the past of Jewish, German, and Christian relations to fit their vision of creating a new world. The Nazis, as we shall see, told a story of national origins at the center of which were the evil Jews. But in telling this story they picked and chose from the history of Jewish, German, and Christian relations elements that fit their narrative while creating anew their own present. It is the Nazis who made sense of, and gave new meaning to, past anti-Semitism, not so much the other way around. It is always people in the present who give meaning to the past, while the past itself can never give meaning to a future not yet born.

At the same time, the Holocaust cannot be understood without consideration of the history of European colonialism. Colonial genocides of the nineteenth and twentieth centuries were part of a process of accelerated violence related to nation-building at home and imperial territorial expansion abroad. The Nazi notions of race and of inferior groups who had no right to live belonged in the tradition of European colonialism, which, long before 1933, provided popular, “scientific,” and political legitimacy to British, French, Dutch, Belgian, and others to rule over and kill millions around the world. What set the stage for the Nazi genocides were the broken taboos of earlier decades: the Holocaust was thinkable because, to give but one example, of the prior German extermination of the Herero and the Namaqua between 1904 and 1907 in South-West Africa (present-day Namibia) and the realization that wiping out peoples was a possibility.

Similarly, the enmity against and extermination of the Jews was part of Nazi universe of racial enemies and exterminations. The Jewish genocide was bound up with a set of racial ideas that produced other Nazi mass killings and genocides of, among others, mentally ill patients, Ukrainians, and Russians. The Nazis were determined to build an empire, extending from the Atlantic in the West to the Pacific shores of Siberia in the East, devoted to expansion and the annihilation of entire populations. The Holocaust was only one in a series of genocides committed by the Nazis, and it can be understood only when placed within the comparative history of modern genocides.9 It belongs squarely within the genre of genocides and was not an exceptional, stand-alone historical event. (That said, it has its own particularities because not all genocides are identical, though they all share certain common denominators that group them together as genocides.)

But in themselves the European traditions of modern colonialism and racial ideas cannot account for the Holocaust, and at some point I part way with the scholarship on comparative genocides and on the Nazi empire. Some scholars question in various ways the extent to which the Holocaust was central to understanding National Socialism. In making the Nazi empire, some argue, the Holocaust was a result rather than a goal of Nazism, growing out of the specific circumstances of the war.10 Others integrate the Holocaust into a history of totalitarian genocides committed by Hitler and Stalin in eastern Europe, implying that the Holocaust was a result of the linked policies of the two dictators as they pushed each other to commit ever-worsening crimes.11

The limits of these arguments should also be made clear. If the Holocaust was a result of mass murders in eastern Europe between Hitler and Stalin, why did the Nazis choose to exterminate the Jews of Corfu, and by extension of western Europe, who had no direct relation to this conflict? If the Holocaust was essentially only part of mass murders such as the premeditated starvation of Ukrainian peasants by Stalin in the early 1930s, then why was it that the NKVD, Stalin’s secret police, did not seek to kill all Ukrainians in the Soviet Union or indeed the world, whereas the Gestapo searched for every single Jew in occupied Europe to be murdered and, beyond that, asked the king of Bulgaria and the sultan of Morocco to hand over to the Nazis “their” Jews in order to send them to Auschwitz (both rulers refused)? The genocides in eastern Europe by Stalin and Hitler were bounded by territory, space, and time and had political, social motivations in the mind of the perpetrators. Why did the Nazis target the Jews as the only group that was hunted all over the Continent, as a sort of a spaceless and timeless enemy, whereas other victims of genocide in this period, such as, for example, mentally ill or asocial groups, were not considered existential threats that demanded deportation to Auschwitz from Athens or Rome? The problem with the arguments that the Holocaust was not central to understanding National Socialism is that they view a close description of the circumstances of the Second World War—that is, of what happened—as an explanation to what people believed and imagined—that is, of why things happened. According to these views, implicitly and at times explicitly, anti-Jewish sensibilities were not of major importance in the making of the Holocaust. I wonder about that. Empire building, multiple genocides, and other wartime circumstances cannot account for Germans’ culture and motivations, much as the Nazi immigration policies to push the Jews out of Germany before November 1938 cannot account for burning the Bible.

My view is different. The Holocaust should be placed within a history of Nazi war and occupation, empire building, and comparative genocide. The Holocaust was not unique. But it was perceived during the war as unique by Germans, Jews, and other Europeans, and if we want to understand why the Holocaust happened, we ought to explain this. The comparative approach to genocide sharpens the similarities but also the differences between the Holocaust and other genocides. On the one hand, the idea of exterminating racial groups had been building in European culture and politics for a century before the Third Reich. But on the other hand, it is evident that for the Nazis the persecution and extermination of the Jews was more urgent and historically significant than other genocides they committed. Although they set out to kill all the Jews immediately during the war, they did not have a similar policy for other groups of victims. This only begs the question: Why did the Nazis view the extermination of the Jews as so urgent and fatal to their survival? Why did Germans, Jews, and Europeans perceive during the war the extermination of the Jews as unlike any other genocide perpetrated by the Nazis?

Excerpted from A World Without Jews: The Nazi Imagination from Persecution to Genocide. Copyright © 2014 by Alon Confino. All Rights Reserved.