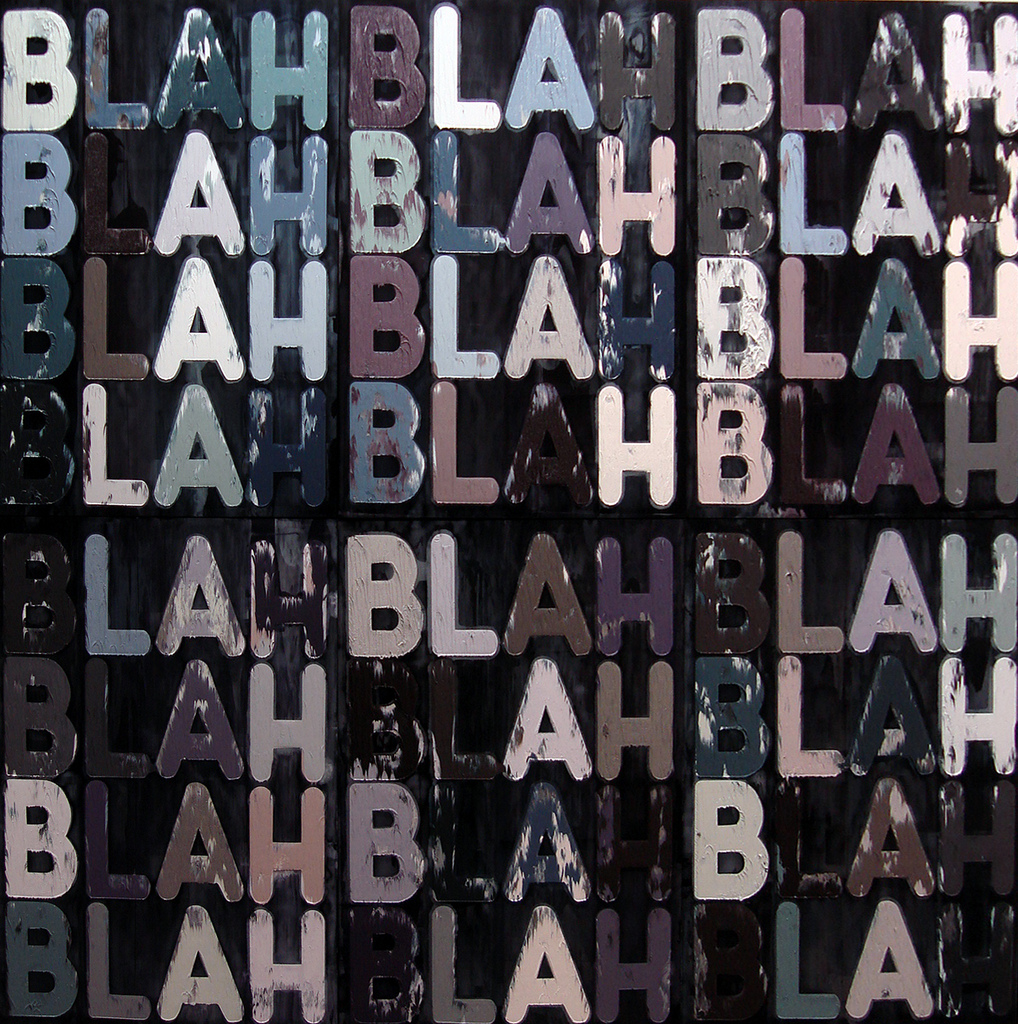 “Blah, Blah, Blah,” a series of recent “word paintings” by Mel Bochner, may suggest a wry comment on the banality and pointlessness in so much of our slogan-saturated culture. Does the quip signify the end of language, the limits of communication? Bochner’s work is anything but blah. Widely recognized as one of the first—and most rigorous—conceptual artists, Bochner has produced evocative and provocative installations and process-oriented pieces over the course of five decades. Incorporating photography, found objects, ephemera and performance, his efforts have questioned the notion of what an art work is or should be. Engaged with number and language systems, he often uses various formats of sculpture, painting and drawing to push the limitations and possibilities of these genres far beyond their traditional definitions and attributes. Unlike other early practitioners in the Conceptual art movement in the 1960s, however, Bochner’s interests never centered simply on the dematerialization of the art object. In fact, over the years, he has produced a wide variety of visually stunning and intellectually compelling pieces.

The Pittsburgh-born (1940), New York-based artist, who has exhibited extensively here and abroad, and also taught at Yale University off and on for some twenty years, is currently the subject of a major survey at the Jewish Museum, “Mel Bochner: Strong Language.” On view in New York, May 2-Sept. 21, the exhibition was organized by the museum’s chief curator Norman L. Kleeblatt, who also wrote an illuminating essay for the show’s catalogue. The exhibition focuses solely on paintings and drawings that feature words and phrases, which have preoccupied Bochner since his “word portraits” of the mid 1960s. This early series of small works on paper resemble Concrete poetry. Neatly handwritten lists of words in block letters relate to specific individuals, including artist-friends and colleagues, such as Dan Flavin, Eva Hesse, and Sol LeWitt, some of which are included in the exhibition. Allusive rather than descriptive, the works are a unique form of literary picture-making. Subsequently, Bochner based a long-running series of word pieces on entries in Roget’s Thesaurus. In his most recent, large-scale paintings, the language games are at once sumptuous, in terms of color and surface texture, and provocative in the way they challenge the viewer to unravel the expressive, emotional and socio-political implications of everyday language—intermittently poetic, and sometimes profane.

Samuel Beckett and Ludwig Wittgenstein have been pervasive influences on Bochner’s language pieces. In a recent phone conversation with the artist, he cited Wittgenstein’s last work, On Certainty (1951), as a primary source, and also mentioned as a key influence the enigmatic poetry of Wallace Stevens. “I like the fact that meaning is not easily surrendered in his work,” Bochner remarked. He expresses a similar attitude toward his own word paintings. “When I was young I was very clear about what my work meant and I purposely tried to contain the meaning. But as I got older, I realized that I don’t have the only interpretation and I don’t have the exact meaning. Generally, I know what I’m about. But now I stay away from interpretation completely. I certainly do not want to guide the viewer’s interpretation. Often there are strong misunderstandings about my work that interest me. Sometimes they can lead me to a completely new thought.”

To gain a greater understanding of Bochner’s endeavor and learn more about the new exhibition, I recently met with Kleeblatt at the Jewish Museum to discuss the show’s aims and raison d’être.

David Ebony: I’ve long admired Bochner’s early installations and conceptual works, but I’ve been a bit skeptical of the more recent word pieces. Your essay in the catalogue went a long way to help clarify this rather difficult material and convince me of its importance. What made you focus solely on the language pieces for this show?

Norman L. Kleeblatt: I, too, questioned the “word paintings” at first, but when I saw the exhibition of Bochner’s thesaurus-inspired works at the National Gallery in 2011, I finally got it. At the time, we were in the process of working with Mel to acquire one of his “Joys of Yiddish” paintings for the museum. The transaction was in progress just as Claudia Gould [Jewish Museum director] joined the staff, and she was very excited about it. So we were already engaged with Mel about that acquisition.

We approached him about doing a solo exhibition here. He had made several visits to my “Action/Abstraction: Pollock, de Kooning, and American Art, 1940-1976” show [at the Jewish Museum in 2008], which he admired, and so he was interested in working with us. I asked him if we could bring the National Gallery exhibition here, and he said, no. Since he hadn’t had a major exhibition in New York in a long time, he wanted to do something different. So we decided to craft an exhibition that would be specific to The Jewish Museum and to New York.

Ebony: In your catalogue essay, you mention the term Conceptual Expression in relation to Bochner’s work. Could you comment on that? Also, you say that Bochner doesn’t like the term Conceptual art, even though he’s widely regarded as one of its pioneers.

The idea that Bochner doesn’t like the term Conceptual art comes mainly from quotes in interviews or published in various articles. It wasn’t a cohesive movement. Yes, there was a cluster of artists in the 1960s and ’70s, doing related works, challenging the notion of what an art work is. But it was never a real group.

For him, Conceptualism is too often defined or misrepresented as a closed system and much too dry. Bochner’s work is different from the other conceptualists. Unlike other classic conceptualists like Lawrence Weiner or Joseph Kosuth, for instance, Bochner has always been interested in interjecting humor and irony into his work, and a tactile presence that is physical, not just implied

Ebony: You mentioned that Kosuth and Weiner’s works are more “sober.”

Kleeblatt: Both Weiner and Kosuth have gotten a lot more playful in recent years, but in the early examples, the text is aimed toward something highly intellectual. They are about resolving certain kinds of problems where the visual meets the intellectual. With some effort, you can take apart the elements and figure it out. There’s a certain method to solving the puzzle. But Mel’s language is not as transparent.

Ebony: Bochner once worked as a guard at the Jewish Museum. What is his work’s relationship to Jewish culture? You’ve suggested that it has to do with an emphasis on text and interpretation.

Kleeblatt: That Bochner was a guard here is the inevitable footnote! How did his Jewishness inform his art? Mel and I talked about this a long time ago. He grew up in an observant household, but he felt that the relationship of his work to Jewish culture was primarily through language and language systems, with its emphasis on text and interpretation. Those are his words. Long before Arabic numerals were invented, the letters of the Hebrew alphabet were also numerical, so there is a kind of numerology built into the language that has been important to him. He also feels that his modus operandi comes from a certain Jewish intellectual rigor.

Ebony: A number of the text pieces contain some vulgar language, and feature lines like “Everybody is full of shit.” Could you comment on that? Also, sometimes there seems to be a deep existential cynicism in the work, I’m thinking especially of the “Blah Blah Blah” series. Is this a comment on the degeneration of language and ultimately a disparaging point of view?

Kleeblatt: It’s basically an observation. He was surprised by the permissiveness and wild variety of obscene words and slang terminology he found in the latest edition of Roget’s Thesaurus. So it gave him permission to go there since it’s meant to be a utilitarian compendium. Is there negativity about it? We’ve talked a lot about Beckett and existentialism. The “word paintings” come from a certain kind of literary and philosophical tradition. I wouldn’t say they’re about hopelessness or despair. The “Blah Blah Blah” pieces are about words failing, and the failure of language itself. I particularly love the monochromatic “Blahs” that are very painterly, with drips and splashes. For me, the painterliness mirrors the futility of the words. Some other pieces by contrast are rather crisp and perky, and feature a wide variety of colors.

Ebony: What would you say is optimistic or uplifting about the work? What do you hope viewers will come away with from the show?

Kleeblatt: There’s a consistent sense of wit and irony that comes across in the work—a cleverness everywhere that sets it apart. And Bochner always juxtaposes humor with something serious. I hope viewers get a sense of that. In the “Thesaurus paintings,” you are pulled between your desire to read the text and understand the devolution of the word while being seduced by the color and tactile qualities of the surfaces. He creates a kind of visual and intellectual fisticuffs with the audience.

Norman L. Kleeblatt is the Susan and Elihu Rose Chief Curator of the Jewish Museum.

David Ebony is currently a Contributing Editor of Art in America and its former Managing Editor, part of an association with the magazine that spans over 21 years. He has written for A.i.A. more than 450 signed articles, including features, reviews, profiles and news stories. He is also a senior editor-at-large for SNAP Editions, based in New York. He is the author of “David Ebony’s Top 10,” a long-running contemporary art column for Artnet.com, which is accessible on the Artnet web site. He was a Contributing Editor and writer for Lacanian Ink, (from 1998-2012), a journal of art and psychoanalysis. He served for two years (2002-2003) on the Board of Trustees of AICA, the Association internationale des critiques d’art, of which he is a long-standing member. He lives and works in New York City and Clermont, New York. Among his books are Anselm Reyle: Mystic Silver (2012); Carlo Maria Mariani in the 21st Century (2011), Dale Chihuly; Garden Installations (2011); Emily Mason (2006); Botero: Abu Ghraib (2006); Craigie Horsfield: Relation (2005) ; and Graham Sutherland: A Retrospective (1998).