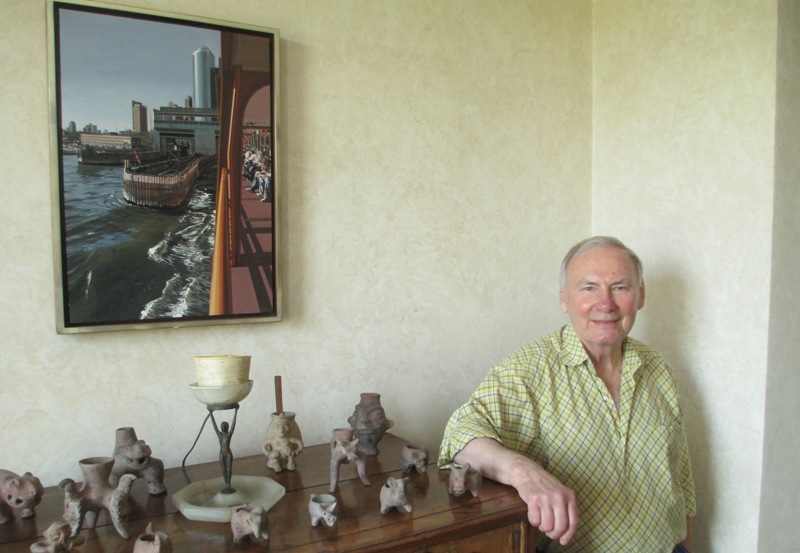 Richard Estes is one of a very few painters from the original Photorealist movement of the 1960s and early ’70s who remains true to the precepts of the genre and has continued to thrive. Unlike those of many other practitioners of Photorealism, Hyperrealism or Super-realism, as the movement is variously termed, Estes’ photo-based works have never gone out of fashion. His paintings are collected and shown around the world and sell for hundreds of thousands of dollars. This spring he is being honored with his first-ever comprehensive museum survey. Organized by independent curator Patterson Sims, in collaboration with Portland Museum of Art curator Jessica May and art historian Helen Ferrulli, the exhibition contains 50 major paintings spanning nearly 50 years. “Richard Estes’ Realism” appears at the Portland Museum of Art, Maine, May 22-September 7, and travels to the Smithsonian American Art Museum, Washington, D.C., October 10, 2014-February 8, 2015. The retrospective is accompanied by a catalogue with essays by Sims as well as by May, who discusses Estes’ photographic practice and the complex relationship between photography and painting in the artist’s work.

Estes is renowned for his extraordinary precisionist technique in producing familiar yet uncanny depictions of New York cityscapes, featuring multilayered, ultra-reflective surfaces of steel and glass skyscrapers. Glass windows and the glossy sheen of cars, buses and ferry boats traversing shimmering expanses of water on the Hudson and East Rivers challenge viewers with optical illusions and games of perception that never quite resolve themselves. In more recent paintings, Estes frequently turns to nature, producing scenes of vast panoramas ranging from Antarctica to the Hudson Valley. These pictures engage the viewer in an almost cinematic visual experience. All of the works are imbued with a convincing—and dazzling—sense of natural light; and his nighttime scenes offer a similarly mesmerizing play of artificial illumination. Figures sometimes appear in the work, but human presence is most often only subtly implied. It is therefore easy to project oneself into the image and to become totally immersed in the scene.

Born in Kewanee, Illinois in 1932, Estes began drawing at a young age, and also started taking photographs at age eight when he received an Eastman Kodak Brownie camera. After graduating from high school he worked for a year as a clerk in an insurance company to save up enough money to travel in Europe for the first time, in the summer of 1951. It was the beginning of a lifelong interest in travel, which continues today. His artistic pursuits were met with some skepticism by his parents, although they were basically supportive of his enrollment in the School of the Art Institute of Chicago upon his return to the U.S. In 1958, he moved permanently to New York City, where he found work as a commercial artist and illustrator, while he spent increasing amounts of time focused on his own painting. His earliest efforts were figure studies of working class urban denizens painted with loose brushwork redolent of the Ashcan School. But by 1966, he had shifted his style, relying more on his photographs of cityscapes to create taut compositions of buildings and ordinary street scenes, transforming them into something quite extraordinary.

His first solo show, at Allan Stone Gallery in 1968, caused a stir. The exhibition sold out before the official opening, drew the attention of some high-profile critics, collectors and museum curators, and was praised by fellow artists, Salvador Dalí among them. His technique was compared with that of Vermeer, Canaletto, Frederic Edwin Church and other masters, while his imagery of ultramodern urban structures, commercial signage and everyday city scenes neatly connected to Pop art and the American vernacular. Photorealism is a label Estes shrugs off today, but it remains relevant because of his use of his own photo sources and, lately, computer imaging programs. Other surviving pioneers of the genre, such as Malcolm Morley, Chuck Close and Audrey Flack, have in their current practice moved rather far away from its tenets. Estes, however, has somehow managed to transcend the limitations of the genre while remaining steadfast to its basic formula. His most recent painting, The Eye Man (2014), for instance, is a superlative example of Estes’ endeavor. The image of an optometrist shop and eyeglass store is a densely layered cacophony of countless reflective surfaces and unfathomable depth, all unified by the rigorous geometry of scaffolding that spans the foreground. It is an endless puzzle of perception that is as much in homage to painting as it is to vision itself.

Recently, I visited the dapper 82-year-old in his spacious Upper West Side home and studio, which he shares with his longtime partner, musician and photographer Chris Jones. Rarely consenting to interviews, Estes is humble about his achievements and reticent to analyze his success. Nevertheless, he shared some memorable insights into his work and thought processes.

David Ebony: Why have your works been so long admired and collected when other artists associated with Photorealism have not enjoyed such success and longevity?

Richard Estes: Who knows? I guess that’s a question for others to decide. I just do the work.

Ebony: Your early works, from the mid to late 1950s, were rather painterly and in an almost expressionist style. Then in the mid 1960s, you shifted to a more precisionist technique. What caused the change?

Estes: I have always wanted to be a realist painter. Early on, the main problem for me was the lack of technique rather than intention.

Ebony: Could you talk a bit about your technique?

Estes: I use photos in a way that’s similar to how a still life painter refers to the objects that he or she is painting. Or as a landscape painter looks at a scene in nature. I just use the prints as a model for how to look at something. Sometimes I’ll have one print that’s a good quality detail and then use another photo for another part of the composition. I used to use slides. Nowadays, you can do different things with a computer. I can make an image lighter or darker, to emphasize shadows, for instance. The computer allows you to have more control over the photograph. I almost always start with the drawing; sometimes I square up the canvas, making a grid to help transpose the image.

Ebony: An important feature in your work is an emphasis on reflections. There are dense and intense layers of images reflected in glass, steel and water. Why are you attracted to these kinds of surfaces?

Estes: It’s just interesting to me visually. There’s no psychoanalytical reason for it. I just look at things the way they really appear rather than picking out certain aspects of an image that might imply some specific meaning.

Ebony: Some of the buildings you have painted no longer exist and certain city scenes have been totally transformed. Over the years, your work has taken on an unexpected historical significance.

Estes: Sometimes I think I have the kiss of death. Whatever I paint they seem to tear down. But it’s not that I paint things that I consider beautiful. My basic thought is that it could be the ugliest thing in the world, but somehow you can make an interesting painting of it. I’m actually getting sick of these glass skyscrapers that are going up all over the place, with ugly shapes and colors, yet here I am painting them like crazy.

Estes: I just wanted to see if I could do it. I haven’t abandoned cityscapes. I’m not turning my back on the urban environment or making a statement about a return to nature or something like that.

Ebony: You spend part of each year in Maine. How is your work routine different in the country than in the city?

Estes: It’s pretty much the same. I get up around 8, but sometimes it could be 2 in the afternoon before I start painting. I don’t have a set routine there or in the city. Yesterday, for example, I was painting until 9 at night, but I didn’t start working until 4.

Ebony: You’ve traveled extensively throughout your life. Is there any place you’d like to go that you haven’t been?

Estes: I’ve not been to China. But maybe it’s too late to go there now. It seems like it’s ruined. In November, I’m going to South Africa, where I’ve never been. It’s a safari type of trip, and then we’re going to Victoria Falls. I haven’t really been to Africa except for Morocco. I also haven’t been to places like Korea or Vietnam, which could be interesting.

Ebony: What works do you look at these days, and what artists do you admire?

Estes: There’s not much. I went to Chelsea for a couple of hours the other day. I didn’t see anything I liked. Most of what I see has nothing to do with what I’m doing. Colors are too bright. Lots of uninteresting abstraction. I don’t keep up with the art world much. I think I haven’t read an art magazine in about 15 years. I can walk over to the Met. I still look at Canaletto, Belloto and Velázquez, of course.

Ebony: What advice would you give young artists and art students?

Estes: Don’t go to art school! It will ruin you and bankrupt you.

Ebony: But you went to art school and you did all right.

Estes: I didn’t learn all that much in art school. It was only after art school, when I worked as a designer, and learned a lot more then. In art school, they give you an easel and a brush and tell you to express yourself. With me it was always a problem of how to do it, not what to do. I was interested in working with different mediums and techniques, all the stuff they sort of dismiss in art schools these days. Years ago, I went to art exhibitions a lot more and tried to relate to what others were doing, but eventually found my own way.

Ebony: What are your thoughts about your current retrospective? Was it difficult to choose works that best represent your career?

Estes: Patterson Sims picked out the works. It started out to be a water-themed exhibition and then it sort of grew into this survey, with lots of pieces being added. I’m always thinking about the next work rather than looking back. I just finished a painting of an optometrist’s office and eyeglass store [The Eye Man (2014)]. It’s kind of like Watteau’s Shop Sign [Shop Sign of Gersaint (1720-21)], you know, the late work. I guess I’m entering my Watteau phase now.