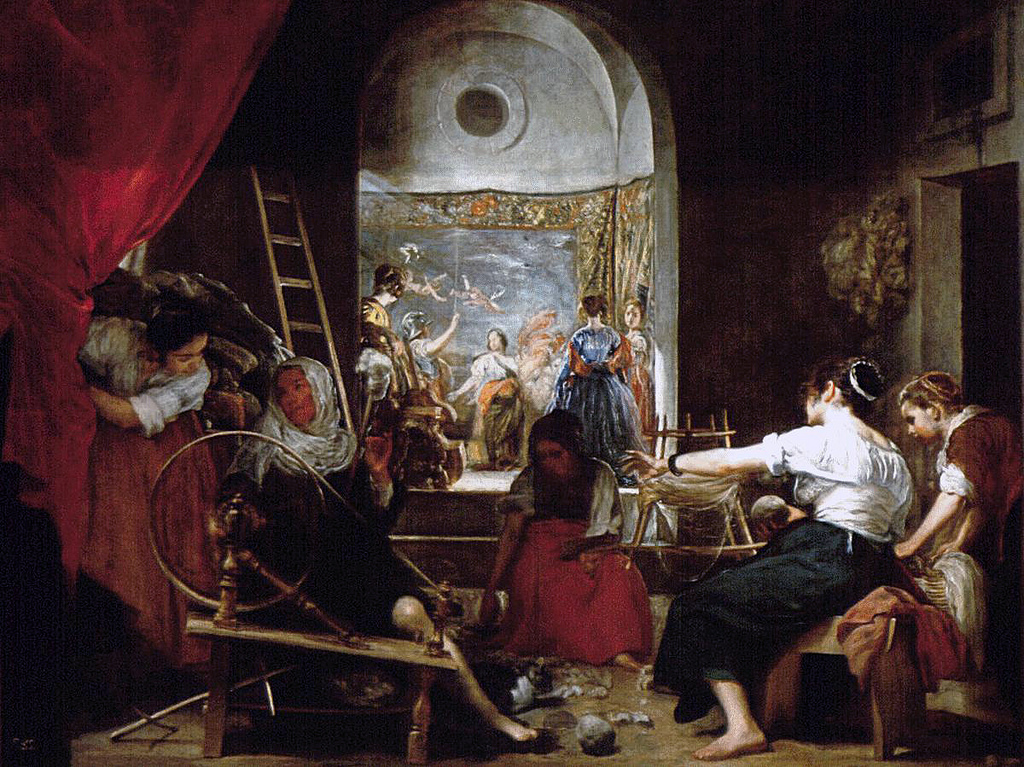 Image above is a photograph of "Las Hilanderas" (1659) by Diego Velázquez, used with permission.

From Vincent van Gogh to Tracey Emin, artists of the modern era have had no problem dismantling the boundaries that once divided private life from artistic pursuit. Rarely have art historians and scholars in the field attempted such an autobiographical merger of life and work. An exception is Jonathan Brown in his new book In the Shadow of Velázquez, which is an unusual blend of autobiography and art history. One of the world’s foremost authorities on Baroque art, particularly Spanish painting of the 17th century, Brown is known for his rigorous scholarship and accessible writing style. A longtime professor at the Institute of Fine Arts at New York University, he has received numerous honors for bringing to the attention of English-speaking world the once-obscure realm of the Spanish Baroque. Among his many publications are key books such as Images and Ideas in Seventeenth-Century Spanish Painting (1978), Velázquez: Painter and Courtier (1986), and Kings and Connoisseurs (1995).

Born in Springfield, Massachusetts, in 1939, Brown was brought up in a typical middle-class American household, except for the fact that his parents—his father Leonard, working in the insurance business, and his mother, Jean, a librarian—shared a keen interest in contemporary art. Brown’s primary interests in art, however, were in earlier periods. He earned a Ph.D. at Princeton University and began to teach there in 1965. In 1973, at only 34, he was offered the directorship of the Institute of Fine Arts. After five years, he resigned the post but has remained on the university’s faculty ever since. Throughout his career, he has traveled extensively and spent many months studying abroad, particularly in Spain during the Franco era.

In the Shadow of Velázquez offers a personal account of Brown’s background and experiences while establishing his academic career and his rise to the rather stellar position he now holds in his profession. Throughout the book he meshes these personal accounts with insights into academic study itself, its shifts and trends over the years and rivalries among scholars in his field. He also focuses on the latest research on artists such as El Greco and Ribera, whose studio production has surprising relevance to today’s avant-garde art practice. A tall, soft-spoken gentleman with an imposing yet relaxed demeanor, Brown recently met with me at the Institute of Fine Arts to discuss his new book.

David Ebony: In the Shadow of Velázquez is an unusual blend of autobiography and art history. How did you develop that approach?

Jonathan Brown: The book is based on six lectures I was invited to give at the Prado in Madrid. They left it up to me to choose the topic. I find it a challenge to reach out to cultured people who are not necessarily specialists in the field, to invite them into the world I’ve constructed in Spanish art. I thought I’d done enough interesting things in my life to put into an autobiography. But the Prado didn’t want me to do that. I gave the program another title—now the title of the book—and that seemed to satisfy them. I didn’t change the content. But I realized I didn’t have enough compelling experience to hold interest for some 300 pages, so the book encompasses a sort of overview of my main interests.

Ebony: I thought the autobiographical material was very interesting. In fact, I wanted more of it. I was surprised to read that you grew up surrounded by contemporary art. Your parents had no professional ties to the art world but became serious collectors, especially of Dada and Fluxus works. They were friends with Marcel Duchamp and [Fluxus founder] George Maciunas. How did that come about?

Brown: My mother had a real pioneering spirit. She always went for cutting-edge art. She was interested in marginal characters, and many of these artists became better known as years went by, and eventually moved to the center. She had a library background and became most interested in the relationship between text and image. My father supported her interests in every way. Early on, my parents collected the British artist Tom Phillips, whose works are text-based, and also bought pieces by artists like Joseph Beuys and Dieter Roth when they were not very well known in the U.S.

Ebony: Did you meet some of the artists?

Brown: Yes, many. I met Rauschenberg and Barnett Newman, who, much to my surprise, was quite a knowledgeable Hispanophile. I remember going to Claes Oldenburg’s “Store,” and we visited Ad Reinhardt’s studio. I went with my mother on her first visit to Maciunas’s studio.

Ebony: Your parents bought the Shaker Seed House in western Massachusetts to showcase the collection. What was that like?

Brown: They also collected Shaker furniture and artifacts, so the Seed House was filled with original Shaker pieces as well as contemporary art. My mother’s fascination with the Shakers was also part of her interest in marginalized people and groups, as the Shakers certainly were. The Seed House was a kind of work of art in itself. It became very well known in certain artistic circles. There were lots of visitors interested in seeing the works and the archives. My mother was very hospitable and so the living quarters were turned into a bed-and-breakfast at times. And there were many requests for loans. Eventually, the Seed House got to be too much for her to manage. She was worried that my brother and I wouldn’t maintain the house, so she wound up selling or giving the art and archives to various institutions.

Ebony: Your interest in Spain and 17th–century Spanish art must have seemed to your parents to be a kind of rebellious act.

Brown: Yes, in a way. Spain was marginal itself, way off in the right wing at the time. And my parents were way off on the left. But I had a privileged childhood, so I really had nothing to rebel against. And they realized that for me, seeing these important works in Spain at the most impressionable time in my life, might ignite a spark—that still glimmers today.

Ebony: One of the topics you discuss at length in the book that has significant relevance to contemporary art is the idea of branding—I was surprised you used that term. You talk about it in relationship to artists like El Greco and Ribera, who ran factory-like studios that closely correspond to more recent practice by artists like Warhol, Jeff Koons, Damien Hirst and others.

Brown: I used the term to make this process more understandable, particularly as it addresses the problem of authenticity. How can a work be deemed authentic if it results from a workshop with teams of assistants? There are so many paintings attributed to El Greco that aren’t by El Greco. He had such an individualistic style, and one might think it would be too advanced to appeal to a wide audience. But clearly he struck the right chord with the public at the time. The questionable paintings I’m referring to are not truly knock-offs, but they’re not autograph either. There’s often a distinction made between signed or unsigned works, but the signature means nothing. Ribera also created a distinctive style—or brand—and knew how to promote it. He signed works a lot more frequently than other significant painters of his time. In his later years, he signed about eighty percent of his studio productions. But are they authentic?

Ebony: Are you often called in to help authenticate works by these artists? There’s a wonderful story in the book about $10 million riding on the attribution of an early Velázquez.

Brown: I don’t offer my opinion for commercial purposes. The art market exerts enormous pressure, but to have the freedom to think and write, and decide on an attribution in a way I choose is more important to me than the financial prospects. Plus, I want to be free to change my mind!

Ebony: One statement that stood out to me in the book is “Connoisseurship is an art, not a science.”

Brown: Connoisseurship is really about what image a scholar has in mind of what a work by a certain painter should look like. There’s a lot of room for slippage, especially as it pertains to the manufactured studio paintings. There are no formulas or theorems to use to determine authenticity.

Ebony: Since Velázquez has always been central to your work, I wanted to ask in closing, what are some of the latest developments in Velázquez scholarship?

Brown: For decades, a great deal of writing on Velázquez has been dominated by Foucault’s essay on Las Meninas [Michel Foucault, The Order of Things, 1966]. But I think we’re coming out of that phase now. There’s increasing interest in what is called “first audience.” There are letters from Velazquez’s time, books of etiquette and other items of the period that relate to his career and are just now being examined. There’s been so much writing on Las Meninas that I think we’ve lost sight of the actual painting. So I have been trying to return attention to the painting itself. Velázquez is a great artist because he anticipated a way of painting that is not canonical, in terms of the predominant canon of classicism in his day. His technique was so highly individual and extraordinary that it couldn’t be imitated. He wasn’t interested in painting by rules. When his work was rediscovered in the early 19th century, the French and English painters who wrote about it were stunned by his performance, the speed of execution, and by the fact that he could subtly reflect nature with just a flick of the brush. I would like to recreate the sensation of seeing his painting soon after it was completed. 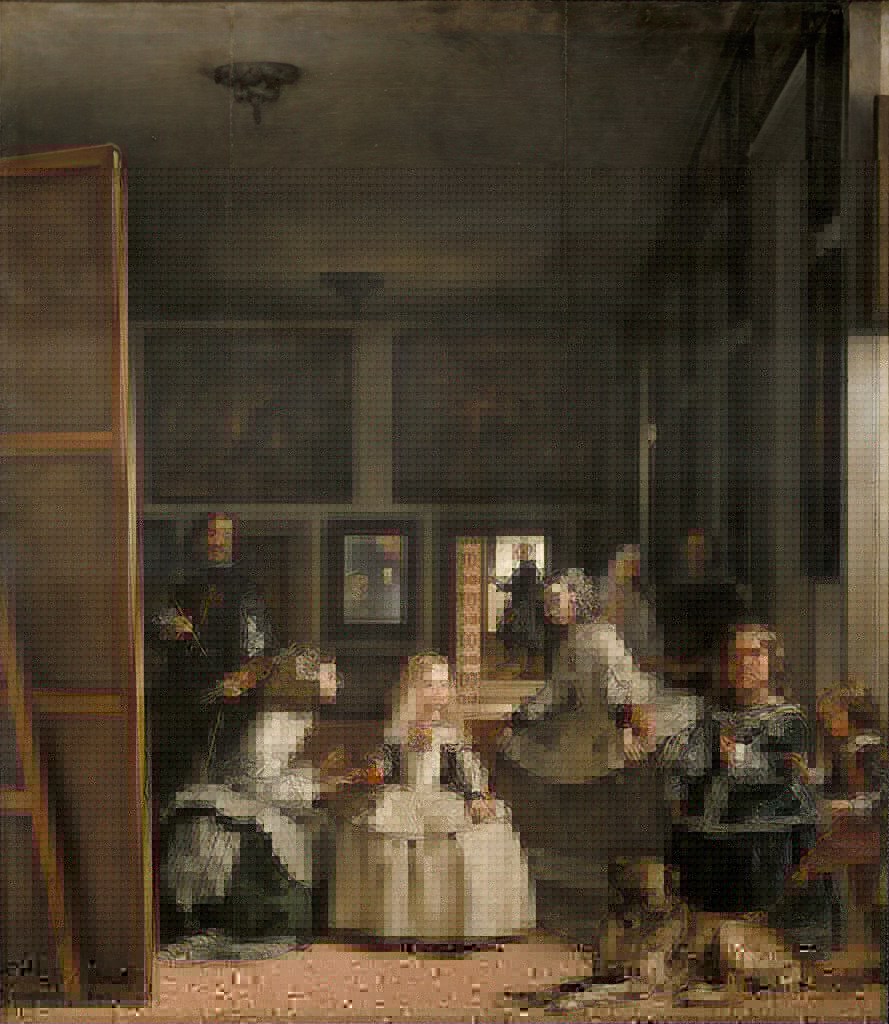