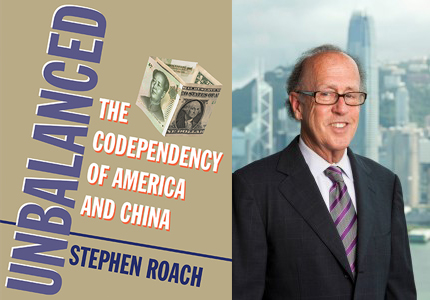 The U.S.-China Strategic and Economic Dialogue (S&ED) is taking place in Beijing, China on July 9–10. In his new book, Unbalanced: The Codependency of America and China, Stephen Roach addresses the current and prospective state-of-play in the economic relationship between China and the United States. As the S&ED approaches, we’ve asked him to weigh in on several key aspects of this important exchange between the world’s two largest and leading economies.

Yale University Press: What is the S&ED and why is it so important?

Stephen Roach: In an effort to formalize and coordinate high level exchanges on economic and financial issues between the U.S. and Chinese governments, a Strategic Economic Dialogue (SED) was launched in December 2006 by Former Treasury Secretary Henry Paulson. In 2009, the Obama Administration broadened the focus of the dialogue to include foreign policy and security discussions—hence, inserting an ampersand into the acronym (S&ED)—and reduced the frequency of engagement from twice a year to an annual meeting. The summit continues to rotate back and forth between Washington and Beijing. It brings together on a regular basis the largest delegation of senior government officials of both nations. Its core mission is to generate a “dialogue that will focus on addressing the challenges and opportunities that both countries face on a wide range of bilateral, regional, and global areas of immediate and long-term economic and strategic interest.” Bottom line: The S&ED is now the main event in the U.S.-China debate.

YUP: What is the mood heading into the upcoming S&ED?

SR: Not good. Tensions have intensified recently on three key fronts—trade and currency (again), cyberhacking, and maritime and territorial disputes in the East and South China Seas. Unsurprisingly, both nations are blaming the other for causing these problems. These are classic symptoms of the blame-game of codependency that I stress in Unbalanced—a penchant for partners to hold the other accountable for problems of ones own making. For its part, U.S. complaints are undoubtedly exaggerated by the domestic political cycle—a fairly typical outbreak of China bashing that has broad bipartisan appeal heading into national elections. China is also shaped by its own political agenda—ironic for a one-party system but in keeping with President Xi Jinping’s grass roots appeal for restoration of the so-called China Dream.

YUP: What do you see as the key issues in the U.S.-China economic relationship that you would like to see addressed at this year’s S&ED?

SR: The main problem with the economic relationship is that it has moved into the danger zone of a destructive codependency, where, as I wrote in a recent op-ed on Project Syndicate, both the U.S. and China are focused more on frictions than on synergies. The challenge is to embrace the opportunities of a more constructive interdependency. In that vein, I would like to see progress on two fronts—moving ahead on a U.S.-China bilateral investment treaty (BIT) and reestablishing military-to-military exchanges on the increasingly contentious cybersecurity issue.

YUP: How can the U.S. benefit from a bilateral investment treaty with China?

SR: China is at the early stage of a powerful transformation—moving from a manufacturing-led investment and export growth strategy to a services-led consumer society. In Unbalanced, I estimate that the growth in Chinese services will amount to some $12 trillion between now and 2025. In an environment of ever increasing IT-enabled global connectivity, many services have been transformed from nontradables to tradables. In the book, I calculate that the tradable portion of China’s coming bonanza in services growth could amount to between $4 and $6 trillion by 2025. No one is better positioned than the United States—the world’s largest and most competitive services economy—to garner a significant share of China’s coming wave of services development. The key will be having access to the growth in China’s domestic services market—a critical objective of a bilateral investment treaty.

YUP: Will China enjoy equal benefits from a bilateral investment treaty with the United States?

SR: Yes, that’s precisely the point. What we get on access to Chinese markets they will rightfully want and demand from us. That’s not to say that each nation replicates precisely the same industry and product-specific access of the other. There will be differences in what each would consider “out-of bounds”—the so-called negative list characteristic of all trade negotiations. But there can be no mistaking that China is now moving aggressively to invest in foreign markets, including those in the United States. According to a tabulation by the consultancy Rhodium Group, China’s outward-bound foreign direct investment into U.S. markets has just surpassed American fixed investment into China for the first time ever. Just as U.S. companies have sought to capture share in Chinese markets, it is only logical that China’s increasingly globalized multinationals seek to do the same in the United States. Both nations benefit from this aspect of economic integration—consistent with the familiar “win-win” mantra of globalization. Furthermore, if China and the United States reach accord on a rules-based framework of market access, that could well set the stage for broader trade liberalization, including China’s participation in the Trans Pacific Partnership (TPP) that the U.S. is currently negotiating with eleven other countries in the Asia-Pacific region. Excluding China from TPP would be a mistake. Progress on a BIT could well avoid such a blunder. That would be icing on the cake.

YUP: But any treaty between nations would need to be approved by the U.S. Senate. What are the chances that a dysfunctional Congress would agree to such an action?

SR: Given the political polarization in Washington, there is little possibility of Senate approval of a BIT with China in the foreseeable future. Realistically, however, U.S. and Chinese negotiators still have considerable ground to cover before presenting any such accord to their respective governments for ratification. The soonest I could envision that occurring would be late 2015 or early 2016—hopefully squeezing through a narrow window in the U.S. political cycle between the upcoming off-year elections and the next Presidential campaign. While this may seem unrealistically optimistic—especially in light of the long and arduous negotiations that preceded China’s accession to the WTO in 2001—there is growing support for such action by trade experts in both countries. An especially strong appeal for a BIT was recently made on the op-ed pages of The Wall Street Journal by none other than Ambassadors Charlene Barshefsky and Long Yongtu, the two principal negotiators of the China-U.S. WTO accord. Notwithstanding the compelling arguments and growing support outside the Washington Beltway for a U.S.-China BIT, it would be naïve to presume that Congress will suddenly put aside its long-standing anti-China biases. That remains a major fly in the ointment.

YUP: How do the charges and counter-charges over cyberhacking affect the relationship and can the upcoming S&ED do anything to calm the waters on this key issue?

SR: Painfully, cyber-espionage has become a way of life in the Internet Era. In terms of the U.S.-China relationship it has become an increasingly contentious issue in the past eighteen months following the January 2013 release of a report by a leading cyber security firm Mandiant that documents alleged hacking of U.S. companies by a cyber intelligence unit embedded in the Chinese army. That report served as the basis of a recent U.S. Department of Justice indictment of five officers in the People’s Liberation Army on charges of espionage, theft of trade secrets, identity theft, and fraud. Following that indictment, China has withdrawn from the military-to-military exchanges that were established at last year’s S&ED in July 2013, denying the validity of U.S. allegations and arguing that the evidence of U.S. cyber hacking provided by former NSA contractor, Edward Snowden, portrays equally egregious violations by the United States. This is a classic example of how the finger pointing of codependency can get partners into serious trouble. A resumption of military-to-military exchanges on cyber issues offers the only viable avenue of resolution. The S&ED is the best platform to accomplish that objective.

SR: They still view the U.S. economy with great admiration—as the largest and strongest economy in the world and as an economy that sets the bar very high in terms of innovation, technological change, and entrepreneurial start-ups. In the same sense, they recognize that the U.S. was seriously wounded by the Great Financial Crisis of 2008-09 and will take a long time to return to its former pre-crisis health and vigor. China continues to worry about macroeconomic imbalances—its own as well as those of the United States. It is attempting to address its imbalances by shifting to more of a consumer-led growth strategy. It is disappointed that America does not seem to be addressing its imbalances after the turmoil of such a wrenching crisis—preferring, instead, to sustain an historic shortfall of domestic saving and thereby still rely on others, such as China, to fill that void. China views this as an inherent source of macro-instability in the U.S. that leads to trade and currency tensions that always seem to be debated at S&EDs. The current Dialogue is hardly an exception in this regard—epically in light of the U.S. Treasury’s recent expression of concern (PDF) over a supposed shift in Chinese currency policy.

YUP: What do you advise as the steps needed to correct the “imbalance” in our two economies?

SR: The solution is conceptually quite simple—China needs to save less and consume more. America needs to do the opposite—consume less and save more and deploy that saving toward rebuilding competitiveness by investing in human capital, infrastructure, and manufacturing capacity. But talk is cheap—the heavy lifting of implementation is where the rubber meets the road. China. I believe, is on that road to rebalancing. The United States, I fear, is not. Instead, we remain fixated on the excesses of debt- and asset-driven consumer-led growth as the crux of the American Dream. In a codependent relationship, this asymmetrical response is troubling. America is likely to feel pressure as China shifts from surplus saving to saving absorption and thereby provides support for the safety net of its own citizens rather than offering such support for American citizens. In response, the United States will find itself lacking the external source of saving it has long relied on as the sustenance of its unbalanced growth. This is the subtext of what is likely to be an equally asymmetrical engagement at the upcoming S&ED in July 2014. It’s the “S” that remains the big problem for Washington—a failure to comprehend the strategic imperatives of America’s rebalancing agenda.

Stephen Roach is senior fellow, Jackson Institute for Global Affairs and School of Management, Yale University. Prior to that he was Chairman of Morgan Stanley Asia, and for the bulk of his career on Wall Street was Chief Economist of Morgan Stanley. Prior to joining Morgan Stanley in 1982, Mr. Roach served on the research staff of the Federal Reserve Board and was also a research fellow at the Brookings Institution. He holds a Ph.D. in economics from New York University. Roach has written extensively for the international media and appears regularly on television around the world.