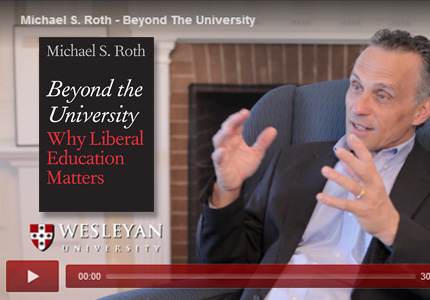 Wesleyan University recently sat down to talk to Michael S. Roth, president of the university and author of Beyond the University: Why Liberal Education Matters. The video and post originally appeared in Wesleyan University’s blog, which you can read here.

The email was indicative of the excitement that Roth’s latest book, Beyond the University: Why Liberal Education Matters (Yale University Press), has generated since it was published in May. The sixth book that Roth has authored, it has received substantial coverage in the national media and has helped put into historical context today’s debates over the value of a broad, liberal education. Roth reminds readers that accusations about the impracticality of liberal education date back to the days of the Founding Fathers, and are never less convincing than now. He draws on the writings of prominent thinkers such as John Dewey, Jane Addams, W.E.B. Dubois and Thomas Jefferson to make the case for a pragmatic liberal education.

Reviews of the book have appeared in The Washington Post and Inside Higher Ed, while a number of related op-eds and essays by Roth have been published in outlets such as The New York Times, The Chronicle of Higher Education, The Boston Globe and The Daily Beast. President Roth has discussed his book with The Atlantic magazine, and on public radio stations around the country.

“We’ve been delighted with the amount of attention the book is getting, both on the local and national levels. It’s engaging precisely with the big and urgent questions out there about higher education, just as we hoped. President Roth has been a great spokesperson for defending the humanities, which have been under scrutiny of late,” said John Donatich, director of Yale University Press. “We are currently selling into a second printing of the book, and it’s very possible we could go into a third printing. We expect it to sell even more in paperback down the road.”

In addition, Chinese and Korean translations of the book are in the works.

Reviews of the book have been positive. Writing in The Washington Post, Christopher B. Nelson, president of St. John’s College in Annapolis, praises it as a “lucid, helpful and accessible account of the current challenges to higher education.”

“By presenting his argument historically, Roth, president of Wesleyan University, maintains a judicious distance from his subject and avoids the trap—all too enticing for a zealous advocate—of delivering a passionate apologia for a broad generalization. Instead, he gives us a substantial and lively discussion that allows the reader to maintain an open mind while examining the strengths and weaknesses of the several threads, each in its own turn,” writes Nelson.

And Kirkus Reviews writes: “While underscoring the democratic spirit of a liberal arts education, one designed to produce ‘active citizens rather than passive subjects,’ Roth traces how even the Founding Fathers of the republic restricted the education to patrician white males, excluding women, slaves and others—and that the question of whether farmers need to be able to read Shakespeare has long sparked debate. Between pragmatism and idealism, the author strikes a moderate, balanced approach. The result is more like a primer on the history of higher education than a manifesto.”

See all media coverage of Beyond the University here.

Read more about Beyond the University in this Wesleyan Connection article.