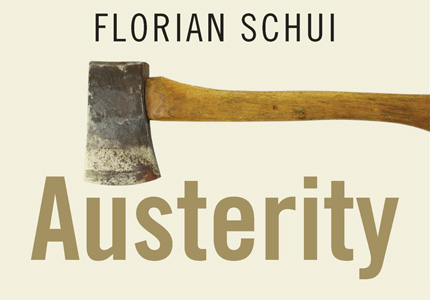 In his sweeping new book, Austerity: the Great Failure, historian Florian Schui tackles the central economic debate sprung from the Great Recession: whether decreasing government spending will renew economic growth. To this debate, Schui brings vital historical perspective – a look at the dismal track record of austerity policies over the course of their long history. Examining the arguments of key theorists of consumption, ranging from Aristotle to Margaret Thatcher, Schui demonstrates that no argument against spending has ever successfully refuted the Keynesian logic of anti-cyclical government stimulus.

What Schui reveals instead is that austerity’s long life is thanks to its moral and political underpinnings – not any economic justification. The moral authority of abstinence over greed, coupled with political maneuverings against labor and the Left, has kept austerity alive in public discourse despite its empirical shortcomings. This confusion of arguments, which Shui ably parses, is as alive in the media today as it has ever been.

Now in their fourth year, the austerity measures placed on debtor nations of the Eurozone by the International Monetary Fund and creditor-state Germany continue to return mixed results. Unemployment in Europe still hangs above 10%, and the situation in the hardest pressed nations remains bleak. In Greece, households burn furniture for heat, and the health care system is a shambles.

Yet Europe’s economic leaders continue to insist on austerity before aid. Their reasoning? Lately, the supporters of austerity have been eager to point to the apparent successes of the policy in the Baltics, particularly Latvia and Estonia.

With Schui’s argument in mind, consider some of the reports on the state of these Baltic nations from local political leaders and major media outlets. Are their arguments purely economic, or might there be moral or political traces in their statements?

For more close readings of the austerity debate – from the Commercial Revolution to the modern day – be sure to check out Austerity, in stores now.