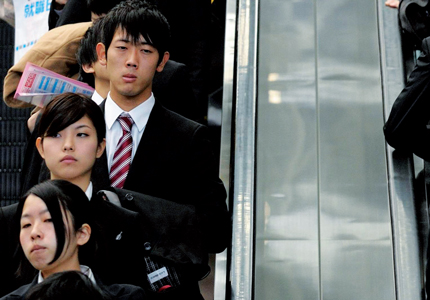 Sixty-nine years ago today, Hiroshima suffered the first nuclear attack in world history. Three days later, Nagasaki was similarly attacked, and within another week, what Japan calls “the Pacific War” had ended.

Japan has changed enormously in the last seven decades, transforming itself from an impoverished and defeated militaristic nation to become one of the wealthiest and best educated nations on earth, admired for its social harmony and its scientific and cultural contributions.

Yet in spite of this transformation, the legacy of World War 2 weighs heavily on Japan, as seen in current debates in the country on three critical issues: the peace constitution, the role of nationalism, and nuclear power.

One of the major reforms in the postwar era was the adoption of a US-drafted constitution that renounced the use of force to settle international disputes and that prohibited the maintenance of armed forces. With strong public support in Japan, the peace constitution has remained intact without any revisions since its inception. But the world has changed dramatically since 1945, and Japanese leaders have sought ways to cope with new security challenges within the constitutional restrictions. A first step in this direction occurred in the 1950s, when Japanese leaders—with full support and even pressure from the US (which sought a militarized ally for the developing Cold War)—decided to reinterpret the constitution to allow for the creation of military forces, as long as they were limited to self-defense. The birth of Japan’s current military, the Self-Defense Forces (SDF), came soon thereafter. In the last twenty years, Japanese government stretched the constitutional interpretation again, this time to allow overseas deployments of the SDF, but only to engage in non-military actions in non-combatant zones abroad, for example, as part of international peace-keeping or reconstruction efforts.

Today the Abe government—again supported by the US—wishes to break out of these current restraints to allow “collective” self-defense, that is, to provide military assistance to its allies when they are under attack. Abe’s preference would be to actually revise the constitution to explicitly permit this as well as broader use of force. Given the difficulty of accomplishing constitutional revision, Abe is settling for now for more “re-interpretation.” Naturally, this is opposed not only by leftists in Japan, but also by Japan’s neighbors, especially China and South Korea, which fear a return of Japanese aggression. Their mistrust of Japan is largely due to Tokyo’s amnesia about its wartime brutality. Many Japanese have come to view their country as a victim of the allies’ attacks (e.g., Hiroshima and air raids in Tokyo), rather than as a victimizer in Asia. Some Japanese nationalists have even propagated views that Japan was engaged in a war of self-defense, not aggressive war; that “comfort women” were prostitutes, not sex slaves; and that the Nanjing massacre was a fabrication. Right-wing nationalists in Japan have always promoted these views, but previously they operated on the fringes of society. Today, nationalist groups are larger and better organized and their views are even echoed in the highest levels of government, as Shinzo Abe and his advisers flirt with nationalist positions.

Nationalism in Japan also affects the country’s attitude toward immigration. With a birthrate far below replacement level and a rapidly aging population, Japan faces a harrowing demographic challenge. One likely solution to this is increased immigration. However, Japan has even faced challenges integrating its large South Korean population, which has lived in the country for generations. Though nationalists in Japan are most hostile to immigrant groups, discomfort with foreigners is widespread in the country and this popular sentiment creates a major obstacle toward government easing of immigration restrictions.

A final legacy of World War II relates to nuclear power. Not surprisingly, there have always been strong anti-nuclear feelings in Japan. Nevertheless, ever since the 1960s, the government has been able to convince the public that nuclear energy is a separate issue from nuclear weapons, and that such power can contribute to safe economic development. By 2011, nuclear power met some 30 percent of Japan’s energy needs and was a major factor in the country’s low carbon footprint. The Fukushima disaster shattered the country’s trust in nuclear power and revived the anti-nuclear movement. Following the disaster, all fifty-four nuclear power reactors in Japan were shut down, and none are currently operating. Energy expenses have soared, complicating the country’s economic recovery and making it more difficult for the prime minister to implement his “Abenomics” package of reforms. Abe is committed to a nuclear future for Japan, but opposition remains strong. Though debate within Japan focuses mostly on issues of public safety and economic development, there are global consequences for efforts to control climate change. Japan’s carbon emissions fell 9.2 percent per year from 2008 to 2011, but then rose 3.9 percent from 2011 to 2012. If Japan is able to re-open nuclear plants with much greater safety controls, it could set a model for safe use of nuclear power as part of a strategy for combating global warming. On the other hand, the abandonment of nuclear power in Japan, or any further serious nuclear accidents, could make it much more difficult to control carbon emissions both in Japan and around the world.

Thus while the bombing of Hiroshima occurred nearly seven decades ago, the legacy of that bombing, and of the war that it devastatingly helped bring to an end, still lives on in Japan and in East Asia. How Japan faces the ongoing legacies of World War II will help shape the future, not only of Japan but potentially of the world.

Keiko Hirata is an associate professor in the Department of Political Science, California State University, Northridge. Her latest book, written with Mark Warschauer, is Japan: The Paradox of Harmony.