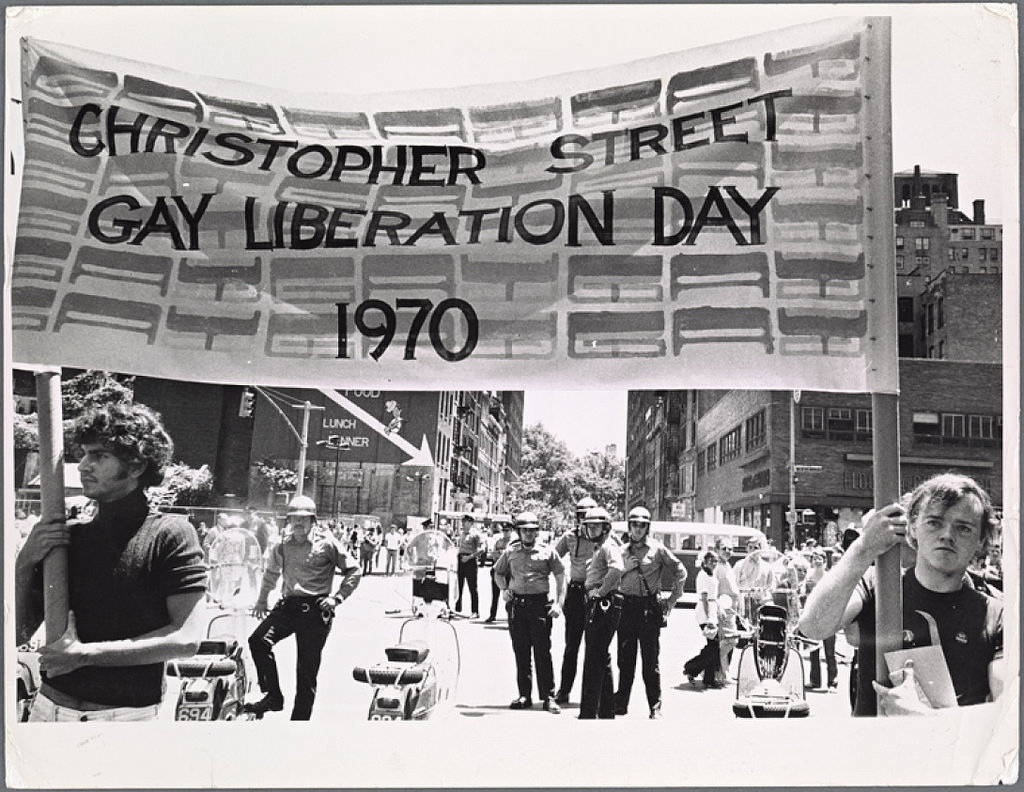 This year marks the 45th anniversary of the Stonewall Riots in New York. It was a pivotal moment in U.S. history when gay men and lesbians forcefully challenged oppressive government policies and demanded civil rights and protection that were long guaranteed to and taken for granted by the heterosexual majority. In the years since then, it has been an uphill battle for lesbian, gay, bisexual and transgender individuals to gain a modicum degree of civil rights. The onslaught of AIDS in the 1980s galvanized and further united the LGBT community to seek rights and opportunities granted to all individuals in the country. The optimum word here is “community,” and to gauge the progress of efforts to integrate this community within the mainstream of American society, one can cite this month’s landmark Supreme Court decision that effectively legalizes same-sex marriage in 30 states and the District of Columbia.

Coinciding with this development, an exhibition of Anthony Friedkin’s photographs in a series titled “The Gay Essay,” and an accompanying catalogue, examine the nascent gay liberation movement on the West Coast in the late 1960s and early ’70s. On view at the de Young Museum in San Francisco, through January 11, 2015, “Anthony Friedkin: The Gay Essay” features 75 vintage photographs that constitute a personal account of the times and an intimate view of the gay scene. Organized by museum curator Julian Cox, the exhibition is the first to include all of the photos in the series, which Friedkin began in 1969, at age 19. At that time, homosexual acts were illegal in every state except Illinois.

“The mistreatment of people in the gay community was one of the initial reasons that I wanted to photograph The Gay Essay,” Friedkin writes in the book’s afterword. “It seemed tragically unfair and deplorable that people were hostile and threatening to others based on their sexual identity.”

The Los Angeles photographer, known for images of surfers and surfing culture, had in mind at the time an ambitious endeavor to be the first to document the local gay scene. While the mainstream press had previously covered certain aspects of the gay community, it rarely reflected an objective, let alone sympathetic, point of view. Friedkin befriended Morris Kight and Don Kilhhefner, who were then directors of the Gay Community Services Center in L.A., and through them gained access to the gay activist circles at the heart of the budding movement. Eventually embraced by the gay community, and using a compact and portable 35mm Leica M4 camera, Friedkin was able to photograph politically charged events as well as very personal, intimate moments.

To further explore Friedkin’s exemplary work and discuss its significance today, I recently met at New York’s International Center of Photography with Nayland Blake, an artist, writer and ICP instructor, who, along with Friedkin, Cox and Eileen Myles, contributed to the book. In his inspired and inspiring essay, Blake suggests an underlying story in Friedkin’s photographs that conveys a sense of joy and love through intimate images of interracial and same-sex couples, which may be as profound and revolutionary as the more overt pictures of political strife and protest.

David Ebony You mention in your essay that struggle and pain as subject matter for documentary photos is more appropriate than joy or pleasure. Why do you think that is the case?

Nayland Blake I think that the documentary tradition is one that privileges depictions of suffering and pain. I don’t necessarily agree with it. It’s especially problematic for social movements that are trying to argue for pleasure when the depiction of pleasure is seen as somehow less serious than images of pain. Certainly art history of past 20 years or more has not been one of valorizing depictions of pleasure or connection. That’s what I was thinking about in the essay.

One the powerful things about the Friedkin photographs is that while they show moments of struggle, like the bombed out MCC [the gay-friendly Metropolitan Community Church in Los Angeles, which was attacked in 1973, an apparent act of arson] and the various community leaders and protests, there are more casual and intimate scenes depicted. We would expect to see images of conflict in mainstream magazines like Life or Time. But in “The Gay Essay” there are pictures of people whose only historical role is that they were having a good time and in a unique way. That’s a real strength in the work.

Ebony What is the importance of The Gay Essay today?

Blake I think its importance has to do with the fact that Friedkin manages to connect with people through the work without a lot of editorializing. He speaks and writes movingly about the project as being centered on the idea of acceptance into a community. It’s rare in a photographer’s published works that you get a sense that he or she understands the community and has had the privilege of being accepted into it. Friedkin’s role as photographer was not exactly that of a participant. But normally the approach at the time would be much more anthropological—capturing images of these people and events to bring to another audience. But these pictures have a very different tone.

Ebony What other aspects of Friedkin’s work set it apart from other photographs of the period?

Blake It has to do with a different kind of art history, one that’s not so grandstanding. Today, we’re accustomed to cameras being ubiquitous. We’re more used to seeing casual pictures coming out of various communities or groups of friends. But these photographs drew on that spirit long before their time. That’s one of the reasons why there’s so much renewed interest in them now. This idea struck me when I compared them with Bill Eppridge’s pictures for the groundbreaking 1964 Life article, “Homosexuality in America.” Eppridge’s images are very much those of an outsider having something to say about a community and trying to find the historical story. By contrast, Friedkin wasn’t so much aiming to tell the “big tale” as he was trying to experience the personalities within the scene. In some of the most memorable images, like those of two women just hanging out on the street, he’s talking about flirtation and sexual attraction. He addresses these kinds of small moments that are so often left out of the discussion. It’s the moment when you feel safe enough to express your desire and your pleasure.

Ebony What were the differences between early gay rights activism on the West Coast and the East Coast?

Blake First, you have to break down the West Coast to Los Angeles and San Francisco. They were very different scenes. L.A. was the initial home of the Mattachine Society in the 1950s, the earliest homophile/homosexual movement. The political issues at stake were generally more socially based, like police entrapment. There was an anonymous gay population cruising in parks that was a constant police target. Friedkin’s San Francisco photos are not so overtly political. The scene there was more about a kind of hippie, gender-queer, performance-art kind of thing. The emphasis was on freedom of personal expression and sexual identity. You can see it in his photos of performers like Divine and the Cockettes. You might say the politics were richer and more esthetic, related to personal presentation and living. By comparison, the East Coast gay liberation movement seems to me to have been more closely allied with the New Left, closer to the student protest movements of the time.

Ebony How have GLBT issues changed from the time of The Gay Essay to today? I know it’s a huge question, but I’m thinking specifically of the relatively recent legalization of gay marriage in many areas and the apparent shift in mainstream attitudes toward homosexuality.

Blake One thing important to consider is that today we think of an issue like gay marriage as the natural outcome of this social engagement, the inevitable endpoint of the trajectory of the gay rights movement. But plenty of people were, and continue to be, disinterested in marriage or fitting into society as it existed then or as it exists now. Lately, the part that gets misplaced or often ignored in gay liberation history is that for many of the participants, it consisted of a critique of society. Not just because society wouldn’t let homosexuals in, but because they thought the whole family structure and the social system were wrong. As individuals who were for so long excluded from the rewards of that system, gay people were uniquely positioned to make that critique.

Works like The Gay Essay helped to break down some of the differences between gay and straight communities—perceived differences that once created a climate of fear. As I mentioned, it’s the small gestures that are most important. In a picture of a couple embracing, there’s a nurturing feeling, so sweet and goofy it’s disarming.