The first edition of Herman Melville’s classic novel Moby-Dick came out in London as The Whale on this day in 1851. But what makes Moby-Dick, or any text, a classic and what do we mean when we call it one? Denis Donoghue, author of The American Classics, shares his insights on appreciation and interpretation in honor of the anniversary of Moby-Dick‘s first publication.

Four big words—three nouns and an adjective—are regularly called upon to attest to extraordinary achievement. The four, in no particular order of majesty, are: classic, masterpiece, genius, and great. They are not synonyms, though it could be said that each is only a glorified way of looking at something and saying “gosh!” None of them claims to be adequate to describe the object, but each of them sidles up to it in a different way.

Great: we say that Eliot’s “The Waste Land,” Yeats’s “Among School Children,” and Valéry’s “Le Cimetière marin” are great poems, and Picasso’s “Guernica” a great painting, and then we turn away from them, unable to say what makes them great. We nod assent to received opinion, and hope that assent will be enough. It is never enough: the work of art exceeds its scribes.

Genius: Shakespeare, Newton, Beethoven, Einstein. The word “genius” adheres to persons, without claiming to comprehend the work the name denotes. In “Hawthorne and His Mosses,” Melville invites American readers to “confess” Hawthorne, “and by confessing him, you thereby confess others; you brace the whole brotherhood. For genius, all over the world, stands hand in hand, and one shock of recognition runs the whole circle round.”  This does not mean that we are all geniuses. Hawthorne is still exceptional. But it implies a fellowship in which we are all members, however lowly you or I may be in the hierarchy of native gifts. Alexander Pope wrote:

God said, Let Newton be! And all was light.

Tamsin Shaw remarks, in a recent review of Darrin McMahon’s Divine Fury: A History of Genius, that “many of us now use the term ‘genius’ as a simple expression of wonder, referring to a person or an achievement that we find inexplicably brilliant.” But I’m not sure what it means to call this wonder “simple,” unless it means comprehensive or totally abject.  Shaw also notes that the attribution of genius has waned in our time, presumably because genius proved no match for the forces that issued in two world wars and the atomic bomb. The sentiment surrounding the word “genius” seems to make sense now only in mathematics. If, as Thomas Nagel maintains, “in each of us, the universe has come to consciousness,” each of us shares in a latency of genius, much as Melville said of Hawthorne. We still refer to the genius of a language and think that English achieved that state in making Shakespeare possible.

Masterpiece: I rarely use this word, but I think there is a genuine distinction to be drawn between a masterpiece and—the last of my four—a classic. A masterpiece seems to imply a work of a certain scale which, to be known at all, must be known in full. To get it, you have to get it right. Ezra Pound’s Cantos is a case in point. If we take the eight books from A Draft of XXX Cantos (1930) to Thrones de los Cantares XCVI-CIX (1959), we have an immense poem that no one—not even Hugh Kenner, Guy Davenport, or A. David Moody—has yet got right.  It is the woe of every reader to be defeated by it. T. S. Eliot provided an easy way out by claiming that he had no interest in what Pound was saying but every interest in his ways of saying it.  That is cold comfort. Other masterpieces with a similarly demanding character are Milton’s Paradise Lost, the Tempio Malatestiana in Rimini, and the collected works of William Blake: they are not impossible to know but you must know them in full. There appears to be a single, right way of knowing them, but you are not offered a multiple choice.

Classic: It seems to be a mark of the classic—of King Lear, Moby-Dick, Anna Karenina, and other works, many enough—that you are not required to toe the line. If you attend a performance of King Lear and leave the theater growling with rage, it doesn’t matter, you’ve wasted an evening but all else is what it was, the play is what it was, undamaged. You may think of it as an essence, exempt from the casualties of interpretation. The philosopher Whitehead said, in Adventures of Ideas, that “Nature is patient of interpretation in terms of Laws which happen to interest us.” The literary critic Frank Kermode came upon the phrase ”patient of interpretation” with delight. He needed a philosopher’s authority to think of certain objects—works of art and literature, for instance—as somehow patient, equable. So in reading Moby-Dick he hovered over Chapter 99 where Ahab and, severally following him, Starbuck, Stubb, Flask, and ”our old Manxman”  stare at the doubloon, each interpreting it in his own way. And Ishmael says to himself: “There’s another rendering now; but still one text. All sorts of men in one kind of world, you see.” Kermode was so taken with this motto that he cited it as one of the epigraphs for The Classic (1975), the book in which he remembered most warmly both the philosopher Whitehead and the equally patient Ishmael. “The only works we value enough to call classic,” Kermode said, “are those which, and they demonstrate by surviving, are complex and indeterminate enough to allow us our necessary pluralities.” Not that anything goes. Behind all our interpretations,” there is a substance that prevails, however powerful the agents of change. King Lear, underlying a thousand dispositions, subsists in change, prevails, by being patient of interpretation.” So we have our classics, our Moby-Dick, our Divine Comedy, our Portrait of a Lady. I read Moby-Dick as a revenge play, R. P. Blackmur read it as a gothic novel, a convention that Melville “used as a solemn fraud and hoped for the best.” Thus our pluralities. The book itself forgives our offenses.

Denis Donoghue is University Professor and Henry James Professor of English and American Letters at New York University. He is the author of The Practice of Reading and Words Alone: The Poet T. S. Eliot, published by Yale University Press. 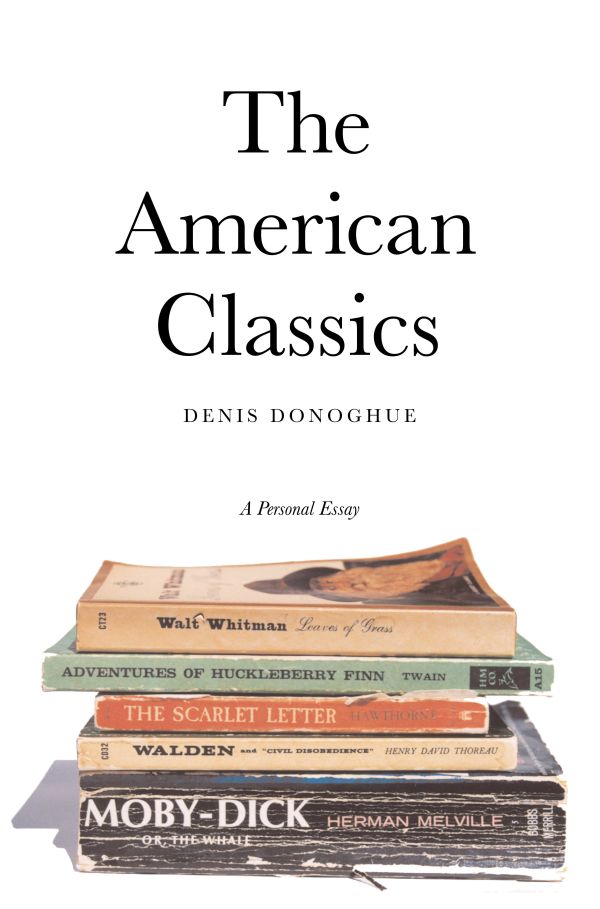