Ed Ruscha’s name is synonymous with the Los Angeles Pop art movement of the early 1960s. His work, however, has an appeal and importance that transcends merely regional concerns and conventions. Ruscha’s five-decade exploration of the American vernacular in photographs, films, paintings, artist books and works on paper, reflects a singular vision and a wry statement about the evolution of culture, the urban environment and the vicissitudes of contemporary life. Perhaps most significant among his achievements is his use of language, particularly his elevation of the written word to a viable and substantive subject for art. This aspect of his oeuvre has had far-reaching implications and inspired many subsequent generations of artists. Today, his influence is evident in the work of a broad range of artists, including Richard Prince, Kay Rosen and Wayne White, to name but a few.

Born Edward Joseph Ruscha IV, in Omaha, Nebraska, the future artist relocated with his family to Oklahoma City, and eventually settled in Los Angeles in 1958. He studied at L.A.’s Chouinard Art Institute (later renamed California Institute of the Arts) with Robert Irwin and Emerson Woelffer. After graduating, Ruscha took a job as a commercial artist for an ad agency. Later, he worked briefly as a designer for Artforum magazine. In his free time, he pursued his own painting, drawing and collage, finding inspiration in the works of Rauschenberg, Johns and Duchamp, as well as Edward Hopper. Ruscha quickly became associated with Los Angeles’s storied Ferus Gallery and its high-profile, all-male, and testosterone-driven stable of artists that included Irwin, John McCracken, Larry Bell, Ken Price, Edward Kienholz and John Altoon.

With his movie-star good looks and abundance of talent, Ruscha drew national attention in the media, and demonstrated an uncanny ability, unlike many of his cohorts, to direct the course of his own career. By the mid ‘60s, he showed with Alexander Iolas and Leo Castelli in New York, as well as internationally, but he remained loyal to his Los Angeles roots.

As Alexandra Schwartz writes in her excellent 2010 biography of the artist, Ed Ruscha’s Los Angeles (MIT Press), “Against these odds, Ruscha remained in Los Angeles. His reasons for doing so were partly personal: he was living the dream he had nurtured while growing up in Oklahoma, with a lively (though, by the late 1960s, increasingly fraught) artistic circle, and an active social life with ties to young Hollywood. Most significantly, his work was so inextricably about L.A. that a move elsewhere would have undermined his artistic integrity; more than any other of his Ferus colleagues, the city of Los Angeles, and its mythology, provided the primary subject matter for his art.”

Through a newly published catalogue raisonné of Ruscha’s collages, drawings and other works on paper—Ruscha Works on Paper Volume One: 1956-1976—it is possible to trace the course of Ruscha’s formative years. The book follows a series of six volumes dedicated to the artist’s paintings. Organized and edited by Lisa Turvey, with an essay by Harry Cooper, Ruscha Works on Paper contains reproductions of each piece he created in the time period. These efforts range from early, realist experiments in still life, from the mid 1950s, through his spare, gestural compositions corresponding to Abstract Expressionism. The bulk of the book features the hardedge, cool and detached images of architectural structures, familiar commercial logos and signage, plus words floating in space that are full of wit and humor.

Among the groundbreaking works here are Ruscha’s well-known “Hollywood” sign images and variations on the 20th Century Fox logo, from the late 1960s, plus later works featuring visual puns and words games, like Pure Poetry (1971) and Headlights Are Similar to People’s Eyes (1974). Unfolding throughout these years is Ruscha’s limitless experimentation with techniques and materials, from employing spinach stains and onion juice for atmospheric effects, to, of course, the famous gunpowder. Recently, Ruscha shared with me, via an email exchange, insight into the development of this ambitious book, the evolution of his works on paper, and his thoughts about drawing today.

David Ebony: What was your role in putting together the catalogue raisonné of your works on paper? What was the most challenging aspect of the project for you?

Edward Ruscha: My role started early on when I began to routinely record all the works I did in my studio. Having no future use in mind, I kept doing it for years just to keep records. At that time there was no such thing as a catalogue raisonné. I had other friends who never bothered to record their works and wondered, seriously, why I did. I can see both sides of this argument.

Ebony: You are known for technical innovations in drawing. What, for instance, attracted you to the use of gunpowder as a drawing medium?

Ruscha: It came about by accident. I was dreaming and looking for any kind of powdered substance I could find, even dust from the floor. As I understand it, even gunpowder itself was discovered by accident. For me, it had a different color than graphite and was easier to correct.

Ebony: Lisa Turvey, in her essay for the book, asks the rhetorical questions regarding your work, “What is the relationship of word to image? How is textual space different from pictorial space?” How would you respond to those questions?

Ruscha: Subject and ground are the elements of most of my thinking–or, you could say actor and stage, or car and road.

Ebony: How has your way of thinking about drawing changed over the past 50 years, near the beginning of your career to now?

Ruscha: It is surprising how paper has survived through several decades of digital mania. I got comfortable with drawing or painting on paper at age 18, and basically have not changed my attitude.

Ebony: In his essay for the book, Harry Cooper writes that “There’s no message in Ruscha’s art, only messages.” He quotes you as saying, “Communication is always what I’ve been interested in. But I’m not broadcasting anything.” Could you elaborate on that idea?

Ruscha: Art making is a way to communicate only with myself and not necessarily with others. A work has to reach self-satisfaction then it enters into another, more ambiguous realm of presenting itself to an audience.

Ebony: What would you say to young artists who ask you about the importance of drawing in their own work?

Ruscha: Drawing could be likened to thinking with a pencil.  I sometimes think whistling is to drawing what a symphony is to painting. But a drawing can certainly be a noble finished product not to be taken as secondary to an oil-on-canvas or a piece of sculpture.

Gagosian Shop is pleased to announce a talk and book signing with editor Lisa Turvey to celebrate the release of Edward Ruscha Catalogue Raisonné of the Works on Paper, Volume One: 1956-1976, published by Gagosian Gallery and distributed by Yale University Press.

We’ve also gathered a number of wise, insightful, and/or searingly funny quotes from the eminently quotable Mr. Ruscha, which we’ll be sharing over twitter over the next couple of weeks. @yaleARTbooks #EdRuscha 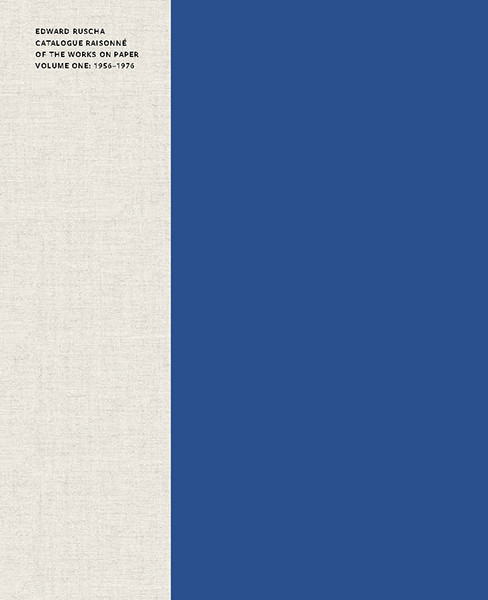