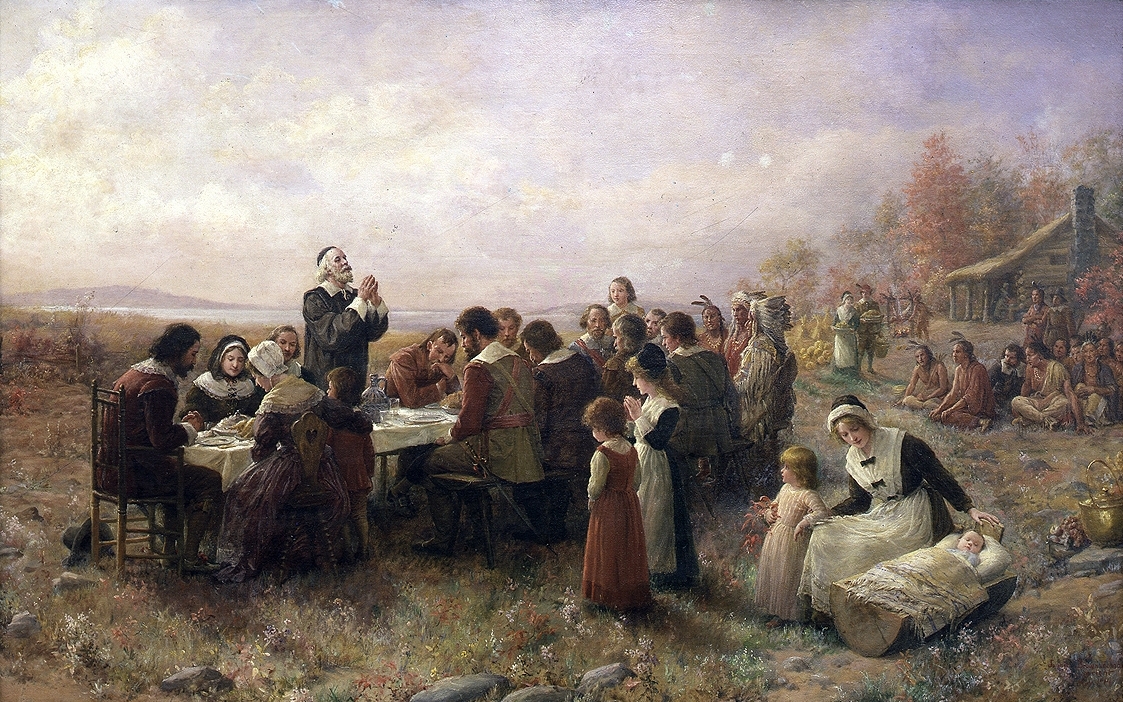 "The First Thanksgiving at Plymouth" (1914) By Jennie A. Brownscombe via Wikimedia Commons

Thanksgiving, turkey, the last Thursday in November. By tradition, this national holiday replays the Pilgrims’ celebration of their first New World harvest. But arguably it owes as much to nineteenth-century patriotism as to anything that happened in Plymouth in 1621. Evidence about the “First Thanksgiving” is thin: just two seventeenth-century sources, sketchy on detail, although both written by people who were present.

The earliest account comes from Edward Winslow, a future leader of Plymouth Colony, in a letter sent to England a few weeks after the event:

our harvest being gotten in, our Governor sent four men on fowling, that so we might after a more special manner rejoice together, after we had gathered the fruit of our labors; they four in one day killed as much fowl, as with a little help beside, served the Company almost a week . . . many of the Indians coming amongst us . . . for three days were entertained and feasted: and they went out and killed five Deer, which they brought to the Plantation . . . [i]

Winslow clearly identifies a time of rejoicing, which would have been more than a harvest supper. Puritans had a habit of setting aside days of prayer, for penitent fasts or grateful thanksgivings. But where’s the turkey? Conspicuous by its absence: “fowl” could just as easily have been duck, goose, partridge, pigeon or quail. At this point, wildfowl and venison, along with seafood, foraged nuts and berries, wild leeks and onions, were settlers’ survival rations. Crops had been poor, apart from “Indian corn” (maize). The livestock shipped over on the Mayflower—goats, chickens, pigs (no cattle or sheep as yet)—was still needed for milk and eggs and breeding and could not readily be slaughtered. Settlers had to seize every chance to stock the larder: “as they came home, they shot at an eagle and killed her . . . excellent meat . . . hardly to be discerned from mutton”.[ii] Winslow stressed that anyone coming to New England should bring “a musket or fowling piece . . . long in the barrel, and fear not the weight of it, for most of our shooting is from stands . . . let your shot be most for big fowls”.[iii]

Which brings us back to turkeys. The only other account of harvest-time 1621 is in Governor William Bradford’s history of Plymouth Plantation, written perhaps ten years later. Bradford was vague about thanksgiving but definite about turkeys:

They began now to gather in the small harvest they had, and to fit up their houses and dwellings against winter . . . And now began to come in store of fowl, as winter approached . . . and besides waterfowl, there was great store of wild Turkeys, of which they took many.[iv]

His recollection of turkeys tallies with another letter, written in November 1621 by an obscure settler called William Halton, sent to England on the same ship as Winslow’s, the Fortune— the only ship that came and went from Plymouth that year, after the Mayflower left in April. Halton arrived on this ship and had only been in the New World a few days (so was not an eyewitness of harvest-time) but, like Bradford, he went out of his way to mention “great flocks of turkeys”.[v]

Beyond these fragmentary references, the best early information about New England turkeys (with no mention of thanksgiving) comes from the testimony of William Wood, in a book published in London in 1634 for “the mind-travelling reader . . . or future voyager”:

The turkey is a large bird, of a black color yet white in flesh, much bigger than our English turkey . . . he can run as fast as a dog and fly as well as a goose . . . Their feeding is acorns, haws and berries . . . In winter when the snow covers the ground, they resort to the seashore to look for shrimps and such small fishes at low tides. Such as love turkey hunting must follow it in winter after a new fallen snow, when he may follow them by their tracks. Some have killed ten or a dozen in half a day.[vi]

Although turkeys were native to North America, Wood knew they would be familiar to his English readers. Turkeys were seen as wildly exotic when Spanish explorers first brought them to Europe in the mid-sixteenth century, but were easily domesticated and soon became standard fare. “Turkeys arrived in English cookbooks before English settlers set foot in New England”,[vii] with recipes in print from the 1580s. “Take and cleave your Turkey on the back, and bruise all the bones: then season it with salt, and pepper gross beaten, and put into it a good store of butter: he must have five hours baking”: so instructed A Good Huswives Handmaid for the Kitchin, published in 1594.[viii]

It seems unlikely that the “Good Huswives” on the Mayflower would have made room in their baggage for cookbooks, but who knows? Kitchen utensils

had to be shipped across the Atlantic: pots and pans, skewers and spits—anything made of metal. Pilgrim Mothers are not the stock of tradition, and no source tells us who cooked at the “First Thanksgiving”. Amazingly, by the autumn of 1621 only four adult women survived out of eighteen who reached the New World (the high death-toll was perhaps the price of being cooped up on the Mayflower while their husbands constructed shelter ashore). These four, with around fifty men and children, survived the winter of 1620-21, saw out spring and summer, and resolved at harvest-time to “after a more special manner rejoice together”.

Within a hundred years, Thanksgiving became a New England custom, but its transformation into a national holiday is due to a long campaign by a nineteenth-century writer, Sarah Josepha Hale. Hale described a perfect Thanksgiving dinner in her novel Northwood (1827), with turkey in pride of place. In The Good Housekeeper (1839)—dedicated to “every American woman who wishes to promote the health, comfort and prosperity of her family”[ix]— she advised on how to roast turkey and serve with cranberries. Throughout the 1850s, as editor of America’s most popular women’s magazine, she argued that Thanksgiving should be observed coast-to-coast, like Independence Day, to unify a divided nation. In 1863, in the midst of Civil War, she petitioned Abraham Lincoln— with success. The President urged “the whole American people” to observe the last Thursday in November as a day of thanksgiving and prayer “to heal the wounds of the nation”.[x]

Thanksgiving: now a cherished national holiday, where tradition dictates the menu. But what exactly was on the table at Plymouth in 1621, and who cooked it? That remains a mystery.

Susan Hardman Moore is Professor of Early Modern Religion at the School of Divinity, University of Edinburgh. She is the author of Pilgrims: New World Settlers and the Call of Home. 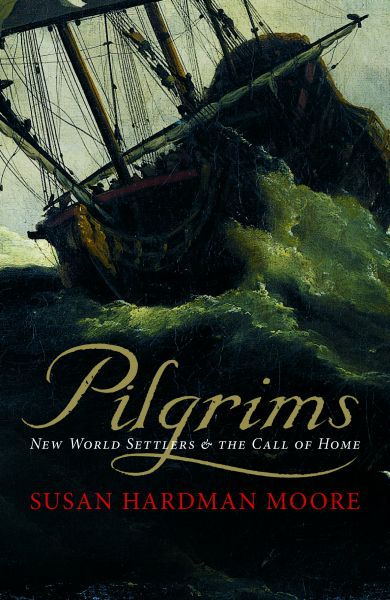 [i] Edward Winslow, ‘A Letter Sent from New England’, in William Bradford, A relation or journal of the beginnings and proceedings of the English plantation settled at Plimoth in New England (London, 1622), 61. [Spelling modernized, here and elsewhere. This book is sometimes known as Mourt’s Relation.]