Members of the 44th Armored Infantry, supported by tanks of the 6th Armored Division, move in to attack German troops surrounding Bastogne, Belgium (31 Dec 1944), via Wikimedia Commons in the public domain

In the harsh winter of 1944-45, the month-long battle for Bastogne, a town with a peacetime population of 4,000 and seven roads, claimed 23,000 American and 25,000 German lives. To commemorate the seventieth anniversary of the siege, which was part of the larger Battle of the Bulge, historian Peter Schrijvers, author of Those Who Hold Bastogne, takes us through the timeline of the siege with firsthand accounts of the action.

“I love you so much darling,” Lieutenant Paul Yearout says in closing, “and would give anything if this mess were all over and we could live normal lives again.” The father of two places the long letter to his wife in Georgia in an envelope and carefully seals it. Little does the American in the Ardennes know that, in a matter of hours, German tanks will be hammering a giant bulge into the Allied lines, making the normal lives that he and his comrades are dreaming of appear further away than at any other time during the war.

German troops are closing the net around Bastogne. In their wake, the dreaded Nazi security forces return to Belgium:

“The Gestapo begins a systematic search of the homes in the village of Bourcy. In the cellar of the Rolands, they uncover an American flag. It has been stitched together from pieces of dyed cloth to welcome the liberators in September. The Germans drag Marcel Roland to an interrogation room in the village. People hear the forty-seven-year-old scream as the agents beat him up. Then the Gestapo takes the Belgian outside again, his face bruised and his clothes bloody. They lead him to a muddy area near the gendarmerie. There they finish their job, smashing the man’s skull with hammers and clubs.”

General von Manteuffel’s Fifth Panzer Army reports a piece of good news. After days of stubborn resistance by American forces, Saint-Vith has fallen at last. With this key obstacle out of the way, all attention turns to Bastogne, the only remaining thorn in the side of von Manteuffel’s army, the force that now forms the Schwerpunkt of the Ardennes offensive, Hitler’s last desperate gamble to turn the tide in World War II.

To the east of Bastogne, German troops are dug in as close as two miles from the town square. To the west, they are actively probing American lines still bulging out as far away as six miles from the small Belgian town. For all practical purposes, Bastogne is surrounded. Some 14,000 American airborne and supporting troops and 3,000 civilians now find themselves trapped by a much stronger German force desperate for victory at the vital Belgian crossroad.

“Always advancing and smashing everything,” a German officer tells his wife. “The snow must turn red with American blood. Victory was never as close as it is now.”

Worried Americans in Bastogne confide to fourteen-year-old Monique Guiot that they are fast running out of supplies:

“They believe,” the girl notes, “that it is all over for them and us.”

“Bastogne,” an airborne officer observes, “vibrates with the thunder of American engines.”

Monique Guiot is electrified to see the Americans so buoyed:

“When, later that afternoon, word spreads in the convent and school of Notre Dame that a crewmember from one of the downed C-47s has been brought to their underground shelter, civilians give him a triumphal welcome, chanting ‘Vive les Américains’ over and over again.”

In the same shelter, Maria Gillet catches a glimpse of another American, brought in on a stretcher:

“Where his legs have been,” she scribbles in her journal, “I can see only a shapeless mass of crushed flesh, blood spills onto the floor. My thoughts go to his faraway mother.”

“They feel the cold even more than we,” a German soldier facing the 501st Parachute Infantry writes to his wife, “for they are lying in their holes without having been issued winter clothes.”

Hunger continues to gnaw at the besieged troops. Two GIs are killed while foraging for food:

“As we watch them being placed onto a jeep,” Private John Fitzgerald notes, “we can see some potatoes rolling from their pockets onto the ground.”

“Eventually,” an Alabama paratrooper in a foxhole admits, “I find myself thinking about my M1 rifle. A click of the safety and a tug of the trigger and my suffering could be over.”

That evening, a concerned Anthony McAuliffe, commander of the besieged force, is on the phone with General Middleton:

“The finest Christmas present the 101st could get,” he insists, “would be a relief tomorrow.” From his headquarters in Florenville, the mild-mannered southerner and commander of the VIII Corps replies, “I know, boy. I know.”

Through a vent in the shelter of the Notre Dame convent, one of the boarding-school girls fixes her gaze on a soldier on the sidewalk:

“The American kneels, his rifle in one hand, a rosary in the other. He closes his eyes and prays. Then he gets up and hurries to where the rumble of battle can be heard.”

The Americans manage to halt one of the most ferocious German attacks just yards from the town square:

“They have stood off overwhelming enemy strength,” an officer in Bradley’s 12th Army Group headquarters notes admiringly, “clinging stubbornly to their positions like a wagon train in the pioneer days of the west.”

A lieutenant searches the bodies of slain Germans for decorations and other souvenirs:

“In the haversack of one of the dead he finds cookies that appear to have been sent by the German’s family for Christmas. The officer nibbles away at the cookies as he takes in the carnage.”

“Patients with head wounds or injuries to the chest or abdomen are awaiting a slow death,” doctor Prior notes ruefully, “because they can not be operated on.”

Late in the afternoon, the 37th Tank Battalion, one of Patton’s spearheads, at last manages to lift the siege from the south. Commander Abrams and his staff are taken to the cramped space of Bastogne’s command post where they receive a raucous welcome:

“A 4th Armored Division officer warns correspondents who are determined to reach Bastogne that the corridor is still ‘so narrow you can spit across it.’”

The Germans refuse to give up their battle for the crucial crossroad of Bastogne. More than 100,000 have already converged on Bastogne and another 30,000 are on their way. Patton’s Blitzkrieg turns into a war of attrition that will last for three more weeks.

More American troops are rushed to Bastogne to help hold the vital town as Siberian weather conditions set in:

“It is so cold,” a sergeant from Hoosick Falls, New York, observes when he arrives, “that every breath feels as if our lungs are full of ground glass.”

Men of the 87th Infantry Division clash with the battle-hardened Panzer Lehr Division just west of Bastogne. The carnage is beyond belief:

Orders come down for Waffen SS divisions to be thrown into the Bastogne cauldron:

“A badly wounded German in Mageret pulls a photo from his pocket and shows villagers a portrait of Adolf Hitler. ‘If I die,’ he whispers to the Belgians, ‘I’ll die for him.’”

A concerned Patton confides to his diary later that day:

“We can still lose this war.”

It is the Germans who lose the Battle of the Bulge when Patton’s Third Army at last meets up with the American First Army at Houffalize. The German bulge is now closed off:

“Repeated Allied bombardments of the enemy escape route through Houffalize have left the town a moonscape of charred rubble. GIs keep their mouths covered to avoid inhaling the nauseating stench of burned flesh from German and Belgian corpses.”

Somewhere between Foy and Noville, just north of Bastogne, airborne troops are detailed to collect frozen corpses for the graves registration units that will soon follow:

“They are stacked 12 to a pile,” one paratrooper remarks casually, “with the Germans in separate groups from the Americans.”

Peter Schrijvers studied United States military and diplomatic history at Ohio State University in Columbus, and is currently a senior lecturer at the University of New South Wales in Sydney, Australia. Schrijvers is the author of five previous books on World War II, and his latest is Those Who Hold Bastogne. A native of Belgium, thoroughly acquainted with the terrain and people of the Ardennes, he has spent several decades researching the American, German, and Belgian dimensions of the battle for Bastogne. 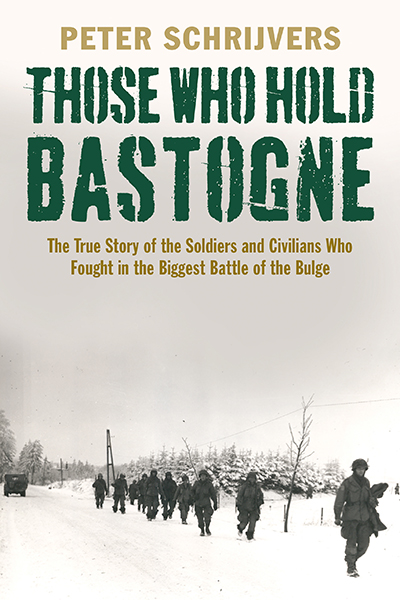