The Imitation Game is a good yarn about Alan Turing and cracking the German naval Enigma code during World War II. But that’s what it is: a good yarn. It claims to be based on Andrew Hodges’s 1983 classic biography of Turing, but it would be more accurate to say that the movie was “inspired” by Hodge‘s book. Curmudgeons would even say it’s a fantasy based on facts. More seriously, the movie is a gross distortion of Turing’s character. Hodges told The Guardian newspaper that he was “alarmed by the inaccuracies” in the film and called some of its scenes “ludicrous.”

That said, Benedict Cumberbatch’s portrayal of Turing is so heroic, engaging, and even endearing that it’s easy to overlook the movie’s simple distortions of facts. And let’s face it, The Imitation Game is going to tell a lot of people about the tragic and the appalling story of Alan Turing. He was a heroic mathematician and computer genius and, without him, Britain might have lost World War II.  But afterwards, as a result of Cold War secrecy, no one knew how he had almost saved his country. So after he was arrested for “gross indecency” (i.e., for consensual sex with another man), he was convicted and sentenced to chemical castration and finally committed suicide at the age of 41.

The film’s biggest fault is erasing Turing’s personality and replacing it with one more suitable for a Hollywood potboiler. That’s ethically wrong and morally reprehensible. In the movie, he’s a classic case of Asperger’s syndrome. But at various times during the film, Turing is also called “arrogant,” “inhuman,” “narcissistic,” and “a monster” – and that’s where the movie goes astray. A.O. Scott in The New York Times’ review deduced from the film that Turing was “a sentient robot, an empathetic space alien, a warm-blooded salamander with crazy sex appeal.” (A.O.Scott, Broken Codes, both strategic and social.” New York Times Nov. 27 2014.)

Yet friends and colleagues at the time called him intensely shy and kindly. To make sure I had remembered Hodges’ classic book properly, I asked two people whose father knew Turing well and worked with him for years. Donald Michie, the artificial intelligence pioneer, worked with Turing during the war and afterwards. Michie’s daughter, Susan, kindly wrote me that, “Donald never mentioned Alan being arrogant or disliked and I recall him only speaking positively about Turing.”

She also forwarded my question on to her brother Christopher who emailed that his father and Turing “played chess together because they were both well below the prevailing standard at Bletchley, which had several chess masters on campus. They talked about a hypothetical chess machine (which may have led to Donald’s MENACE matchbox machine later). Turing asked Donald to help him find and excavate his buried silver; Donald wisely chose a day rate over a cut of the potential find.

Christopher Michie continued, “This is all common knowledge and can be found in the bio by Andrew Hodges, which has been re-released in paperback as the book that “inspired” the film. Hodges has done his homework as far as I know (I have only read extracts) and lays out fairly clearly the complicated administrative and personal dynamics of the various huts at Bletchley (all of which were closed systems — no mingling and comparing notes in the pub).

“What I gathered from Hodges was that Turing a) was unfailingly generous with his time and expertise, especially toward younger recruits b) was neither a political gameplayer nor a dynamic team-leader and tended to move on once a pressing problem had been solved c) inspired loyalty and affection among those who appreciated his unusual gifts d) continually upset and bewildered officialdom due to his often bizarre yet perfectly logical responses to authoritarian edicts. The film does make some attempt to illustrate these characteristics but tends to fudge the picture with tiresome dramatic inventions. I don’t think it’s worth the effort to criticise the film for its many specific faults as it’s just a hammy biopic in the Hollywood tradition and, as is typical of the genre, fidelity is always trumped by dramatic effects, however ridiculous.”

The film’s fictional characterization of Turing reminds me of James Watson who, lacking some pivotal drama for his book, The Double Helix, portrayed Rosalind Franklin as a heavy despite her vital contribution to the discovery of DNA. Watson’s plot device helps sell a lot of copies of his book, At the same time, though, it has diminished Watson’s reputation.

Maybe Christopher Michie is right that it’s not worth criticizing a Hollywood film for specific factual errors. However, The Imitation Game compresses a lot of inconvenient facts.

These are only a few of them:

To conjure up a villain (as if the Germans weren’t enough), Turing’s team of colleagues is turned into a violent hotbed of spies and jealous men, one of whom tries to destroy Turing’s first machine. The Soviet spy John Cairncross is inserted into Turing’s team and then blackmails Turing into covering up for him. In fact, other gays in the decryption center lived openly without problems. They condense the many heroes in Britain’s decryption effort into one. Turing was indubitably the visionary genius, but he had first-class help. Prominent among them was his assistant, I.J. (Jack) Good. Good made a key breakthrough and after the war championed Turing’s methods and insights.  Yet he is reduced to a five-second appearance early in the film.  The movie even boils down more than a dozen machines developed by Turing and his teams — including the first electronic digital computers, called the Colossi.

Professor Sandy Zabell of Northwestern University, who has written extensively about the history of Bayes’ rule, mentions still another irritation. He emailed, “One of the historical inaccuracies I found the most annoying was the portrayal of Hugh Alexander.  In the movie, he is Turing’s superior and the letter to [Prime Minister Winston] Churchill was written to protest Alexander’s obstructing Turing’s plans. In fact, Alexander came to the Bletchley Park {cryptanalysis center] well after Turing (in 1940), and after initially serving in Hut 6, was Turing’s deputy in Hut 8.  There was indeed a letter sent to Churchill, but it was signed by four people, not just one. These were:

So, as Zabell points out, “Alexander was one of the authors of the letter to Churchill, not the subject of its complaint!  (The letter was hand-delivered by Milner-Barry.)”

For an antidote to this Irritation Game, consider the fact that two papers written by Turing about decoding were so far ahead of their time that the British security agency GCHQ did not declassify and release them until two years ago. That’s a well-nigh unbelievable seventy years after Turing wrote them during World War II.

In them, Turing emerges as a serious and practical cryptanalyst. He’s an outstanding mathematician who believed in balancing his own personal judgment with the fine art of simplifying assumptions. He used Bayesian probability because it helped him solve seemingly impossible problems as fast as possible.

Here’s where The Imitation Game could have looked for its villains: Not to his hardworking colleagues, but to contemporaneous academic statisticians, who would have attacked him without mercy had they known he was using Bayes’ rule. Bayesian probability is now used worldwide by computer technology, software, and artificial intelligence. But it was anathema during World War II. And it had been for 20 years. Fortunately, Turing was a mathematician, not a statistician, and convention did not bother him.

The film, by the way, credits no statistician. It has almost no mathematics either, but it does credit Jon Ingold, as its mathematics adviser. According to Wikipedia, Ingold is a former mathematics teacher who founded a company that makes interactive stories. ‘Nough said.

Incidentally, readers interested in learning more about Turing might like to look at Turing’s 1941 paper online at the website of the UK National Archives and Sandy Zabell’s “Commentary on Alan M. Turing: The Applications of Probability to Cryptography,” in  the journal Cryptologia, volume 36, number 3, pages 191-214.

And for a British take on a British story, you can read The Imitation Game: Inventing a New Slander To Insult Alan Turing and Portrayal of Imitation Game ‘Baddy’ Is Inaccurate, Says Family, both from The Guardian.

Sharon Bertsch McGrayne is the author of numerous books, including Nobel Prize Women in Science: Their Lives, Struggles, and Momentous Discoveries and Prometheans in the Lab: Chemistry and the Making of the Modern World. Her latest book for Yale University Press is The Theory That Would Not Die. 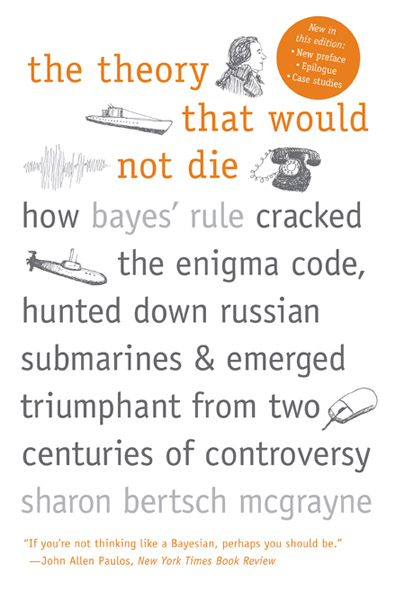