Galileo Galilei was born on February 15,  1564. He was one of four greatest scientists of all time, alongside Newton, Pasteur, and Einstein, and the first great scientist—in many ways the person who invented science.

Galileo was born in Pisa, but raised in Florence. From 1592 to 1610 he lectured on mathematics at the University of Padua. He spent the rest of his life in Florence.

He achieved fame in 1610 when he published The Starry Messenger. Galileo had been the first to grasp the potential of the telescope for exploring the heavens. Others had pointed telescopes at the night sky, but Galileo worked hard at producing a high-powered telescope, and as a result he saw things that no one had imagined: he discovered the mountains on the moon, the moons of Jupiter, and vast numbers of invisible stars. In December 1610 he established that Venus had a full set of phases, like the moon, thus proving that it orbited the Sun not, as classical astronomy had claimed, the Earth.

Galileo spent the rest of his life in a protracted battle to demonstrate the truth of Copernicanism, the correct claim that the Earth is a planet which with the other planets orbits the Sun. In that battle he made mistakes, both political and intellectual. He saw Copernicanism condemned by the Catholic Church in 1616 and his own book in defence of it, the Dialogue Concerning the Two Chief World Systems (1632) condemned for advocating it. Galileo’s political error consisted in provoking the authorities. Galileo spent the rest of his life under house arrest, and the Catholic Church did not permit the teaching of Copernicanism until 1758.

Galileo’s major intellectual error lay in his conviction that he could prove that the earth is moving through the heavens by the phenomenon of the tides. His mechanical model, which claimed that the tides were caused by the surface of the earth going sometimes faster, sometimes slower as it spun, never worked, and never convinced anyone else, but he stuck by it regardless. But in 1638 he published A Discourse on Two New Sciences in Holland, beyond the censor’s reach. The Discourse was the result of a sophisticated programme of experimentation. This great work explained the acceleration of falling bodies for the first time,  showing that, in the absence of air resistance, all bodies fall at the same speed, and demonstrated that the path of a projectile (again in the absence of air resistance) is a parabola. When combined with Kepler’s new account of the orbits of the planets (published in 1609) it showed the possibility of a new physics in which the same laws would apply throughout the universe and opened the path to Newton’s great synthesis.

Galileo had three acknowledged children. His daughter Virginia entered a convent and took the name Maria Celeste. Her correspondence with her father is the basis of Dava Sobel’s Galileo’s Daughter.

David Wootton is Anniversary Professor of History, University of York. He is the author of Galileo: Watcher of the Skies. 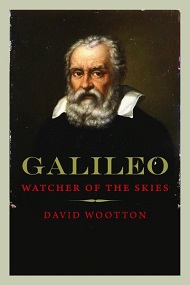