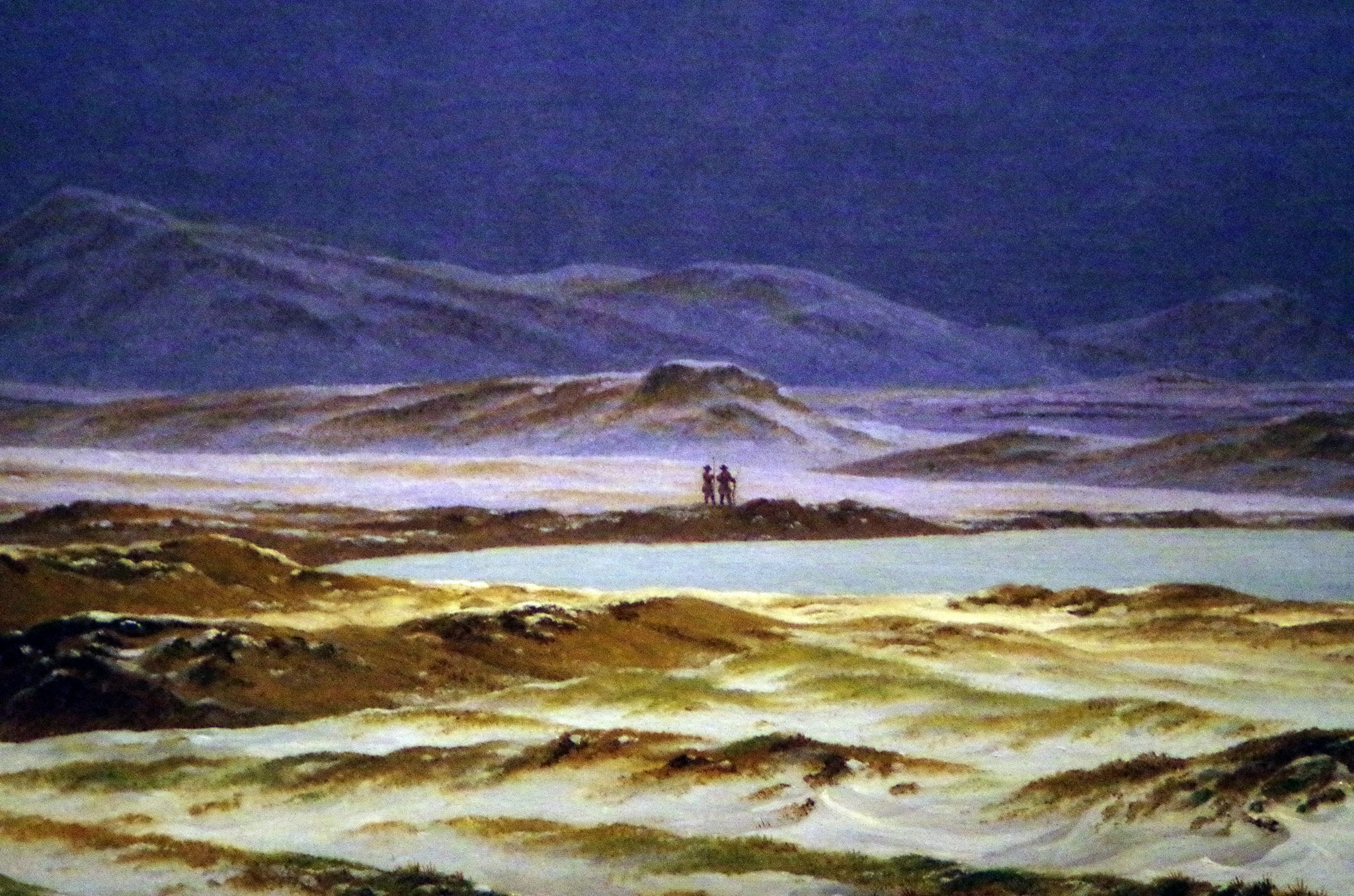 Image above is Northern Landscape, Spring by Caspar David Freidrich, used with permission.

One of the country’s foremost art critics and art historians, Michael Fried is no stranger to controversy. His essay on contemporary art, “Art and Objecthood,” featuring a revisionist view of modernism, caused a stir early in his career when it was first published in 1967. Fried argued against what he saw as Minimalism’s inherent theatricality, which self-consciously engages the viewer in an experience of the artwork. He characterized the genre as “literalist,” and described a condition in which the distinction between viewer and artwork is blurred, even erased.

At the same time, Fried championed Color Field painters such as Jules Olitski, Kenneth Noland and Larry Poons, as well as Frank Stella, and the British artist Anthony Caro, whose works he saw as exemplifying “anti-theatricality” in contemporary sculpture. Later, in the 1980s, after exploring the seminal, mid-18th-century art criticism of French theorist Denis Diderot (1713-1784), Fried elaborated upon his earlier theories and introduced the concept of “absorption,” a term used in opposition to the notion of theatricality. He continues to explore these themes in his work, which by now encompasses a vast stretch of art history, from the Renaissance to contemporary art.

Born in New York, in 1939, Fried studied at Princeton, Oxford and Harvard Universities, and is currently an art history professor at Johns Hopkins University, where he has taught for many years. Despite Fried’s formidable academic credentials and scholarly foundation in art theory, his writing is pragmatic, lucid and quite accessible to a broad readership. He is a contributor to Artforum, and, in tandem with his art-historical research, remains abreast of contemporary art trends.

His most recent book, Another Light: Jacques-Louis David to Thomas Demand, is a beautifully illustrated volume, and a fascinating read. In it, Fried explores his concepts of absorption, theatricality and anti-theatricality in light of an impressive array of artists and artworks. The special focus here is on 19th-century French art and artists, particularly David, Géricault, Manet and Caillebotte. The book also contains a discussion of the works of the German painter Caspar David Friedrich, as well as a surprisingly lively chapter on the early 20th-century English critic Roger Fry. In addition, the book includes engaging essays on contemporary artists Douglas Gordon and Thomas Demand, centered on their recent films.

In a recent phone conversation with Fried, he shared with me his thoughts on Another Light, his daily work routine, and some personal views of his long career, art history and a wide range of other topics.

David Ebony: What is a typical day like for you?

Michael Fried: I wake up early; certainly by seven. When my wife is ready, I bring her a cup of chai. But I usually do a half hour on an exercise bike, and watch something I stream from Netflix. So I begin the day with a workout. I feel lousy if I don’t do it. I grab some breakfast, then shave and shower. I am not yet fully retired from teaching, so two days a week I work on preparing my classes. I teach, or rather, co-teach two classes: one in post-war abstraction, and another on Proust. On the days when I’m not teaching, I get writing done, or I do research for writing. I have been teaching at Johns Hopkins for forty years. It’s an institution that values that kind of endeavor, and understands what I’m doing.

Ebony: I have to tell you that I read Another Light backwards; I mean, I read the last essays, on Douglas Gordon and Thomas Demand, first, and then went back to the others. It was only because at the time I first saw your book I was preparing a short interview with Douglas Gordon for Artnet News, and I wanted to read what you had to say about his work. 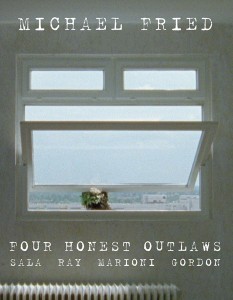 Fried: I’ve written quite a lot about Douglas Gordon’s work. I included an essay on him in my previous book [Four Honest Outlaws: Sala, Ray, Marioni and Gordon, Yale, 2011].

Ebony: How important is it for you that readers follow the essays in the order they appear in the book?

Fried: It is after all a collection of essays. At a certain point this selection seemed to me to be the right combination for the book. Once that is set, I don’t worry about how the book is read. But it does make sense, for instance, to read the essay on David before moving on to the chapter on Géricault. And then those two set the stage for the Caillebotte essay.

Ebony: What is this book’s relationship to your previous works?

Fried: I have about fifty years of writing out there. I started out my professional life as an art critic. I’m still an art critic. In my 1967 essay “Art and Objecthood,” I discovered a crucial issue in the art of that moment, which has to do with the relationship of the work of art to what we call the beholder. My Ph.D. thesis was on Manet. The question was how to go on from that. I understood that that the ideas I had been writing about as an art critic begin with Diderot, and also with Chardin, Greuze, Fragonard, and David. When I was 30 or 31, I realized that I had to make myself a dix-huitièmiste. For several years, I didn’t publish anything, and concentrated instead on transforming myself into a specialist in 18th-century French art. There is a lot to learn, a great deal of material you have to read, from Diderot on.

Ebony: You have taken Diderot’s concept of theatricality versus anti-theatrically and managed to apply those concepts convincingly to a wide range of artworks, up to contemporary art.

Fried: It isn’t exactly an application. What I discovered was a central issue that has developed and morphed dialectically to the present day. We are still living under those basic premises that Diderot 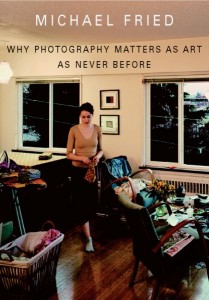 so brilliantly outlined in the 1750s and ’60s. You can read about them in the Gordon and Demand essays, and also in my book on photography [Why Photography Matters as Art as Never Before, Yale, 2008]. I am trying to show how a core set of issues having to do with the relation of the work of art to the beholder has been central to a large tract of modern art. But I also show that those issues are not central to everything—or if they are, the issues themselves take a different form, as in Friedrich, whose essay was the last to be included in the book.

Ebony: One of the most engaging chapters for me was the one on Roger Fry. I expected it to be dry, but you touch on many interesting ideas, like Fry’s “affect theory,” having to do with how works of art trigger strong feelings and emotions.

Fried: Yes; but I think Fry was wrong. I’m against “affect theory.” The interesting thing for me was that Fry didn’t understand that he was an “anti-theatrical” critic. He wants artists to come up with various strategies, but he thinks that some paintings were not made to be beheld. That leads to craziness. Diderot wanted artists to come up with strategies to neutralize or wall off the beholder, but he understood that he was asking for the creation of a fiction. Fry actually thought that a great painting somehow had to escape being beheld by the artist. For example, his idea was that when Rembrandt painted, he actually forgot that he was making a painting. For Fry, if Rembrandt thought he was making a painting to be beheld, everything would be wrong.

Ebony: What would you say is the one book related to art or art theory that has had the most influence on you, aside from Diderot?

Fried: Diderot might be the obvious answer, but he was not exactly an influence. I started out as a critic reading Clement Greenberg; then I realized I had to go beyond Greenberg and against Greenberg in all sorts of ways. I’m still sometimes described as a disciple of Greenberg, and that drives me slightly crazy. Early on I read essays by the French philosopher Maurice Merleau-Ponty, who had a significant influence on me. He explored the notion of “embodiment” and such.

Ebony: Is there a specific book you can cite?

Fried: It would be individual essays rather than a book. I would mention Merleau-Ponty’s “Cézanne’s Doubt,” “Eye and Mind,” and “Indirect Language and the Voices of Silence,” as the important essays for me. Anyone interested in art should read them.

Ebony: What do you hope readers come away with from Another Light?

Fried: The recognition that Géricault is god! Or, seriously, just an appreciation and realization of how much there is at stake in the enterprise of making a work of art. If you want to understand what a serious work of art is today, it is important to understand the art of the early 19th century and what was at stake then. These artists were not just creators, they were major thinkers; and what they expressed in their art and what they achieved are truly momentous.