Coca-Cola was bottled and sold for the first time on March 12, 1894. Since then, the soft drink company has undergone a striking number of changes and expansions: new flavors, new containers, new markets, and new industries. Despite the company’s varied history, Coke’s newest venture, Fairlife milk, might still surprise you. Alissa Hamilton explains how and why Coca-Cola is making inroads on the milk market.

Milk isn’t perfect and Coke is preparing to tell the world that it has the secret formula to make it better: Fairlife milk.  A lactose-free milk with 50 percent more protein, 50 percent less sugar and 30 percent more calcium, it is more and less milk. More Coke’s and less cow’s milk you might say.

If you’re flummoxed that Coke and milk have become synonymous, you’re not the only one. When Stephen Colbert heard about Fairlife, he went to town with the news on the Colbert Report as only he can do.  At one point during a monologue on what he called the “extra expensive science milk,” he quipped about it being brought to us by the “nature loving health nuts at Coca-Cola.”

Coke isn’t letting its reputation as a leading vice maker get in the way of promoting a product that has been sold to us over the years as virtue in a glass.  If the ads for Fairlife that began appearing in 2014 of pin-up-like shots of women scantily clad in splashy milk dresses with provocative slogans such as “Drink What She’s Wearing” say anything, it’s Coke’s belief that just the right mix of naughty and nice will sell big time.

Although Fairlife got off to a racy start, it’s shifting gears. The images of wide-eyed, open-mouthed, high-heeled blondes soaked in milk are history. Get ready for a 180-degree change in scenery, from razzle-dazzle spreads to the type of pastoral pictures of honest Old MacDonalds found at fairlife.com.  Expect more of the toned-down language that the website uses to describe the process that Fairlife milk undergoes:  “Our milk flows through soft filters to concentrate the natural goodness, like protein and calcium, and filter out the sugars.”

The hollow “soft” phrasing that Coke is using to coax us into falling for its milk on steroids echoes the company’s interpretation of Simply Orange: “our not-from-concentrate orange juice has never contained added water, sugar or preservatives and is gently [emphasis added] pasteurized to ensure that you always get a fresh-squeezed taste experience.”  Not surprisingly Coke is calling Fairlife the “Simply” of milk.  It knows that today’s eaters value simple, fresh, and natural foods. So it is doing what it can to buffer the reality of the aggressive production and processing that define its concoctions.  For Fairlife, the true story begins on the farm—one of Fairlife’s suppliers, Fair Oaks Farms, boasts that it “experiences between 80 to 100 calves born every day!”—and ends many moons later in refrigerators across America.

Whatever Coke-styled media blitz is in store for Fairlife going forward, it can’t hide the fact that Fairlife milk is born of desperation, if not necessity, from the union of the flailing makers of two former North American staples, soft drinks and fluid milk.

Coke’s comrade in arms, the dairy industry, isn’t bothering to cover up its sorry state. In late 2014 Dairy Management Inc.—a dairy-farmer-funded organization that aims to “increase sales and demand for dairy products”—announced its partnerships, worth over $500 million, with seven companies. Coke’s joint venture with the dairy co-op Select Milk Producers Inc. to produce, market and distribute Fairlife milk tops the list.  According to DMI: “The effort is being launched to re-invigorate fluid milk sales, with special emphasis on extended shelf life and shelf stable fluid milk products that will be available when and where consumers want them.”

As part of its multifaceted attempt to sell more milk, the dairy industry is getting serious about telling us, much as Coke did in the face of competition from Pepsi, that it’s the real thing. While more and more households opt for the milk of plants rather than cows—whether because someone in the family is allergic to cow’s milk, can’t digest the lactose in it, or is up to date on the latest research questioning its value for bone and overall health—the dairy industry’s #GetReal initiative is flooding social media channels with the message that cow’s milk is real and simple, and that anything but is inferior.

I’m not buying the hype, especially at Fairlife’s $4.59 a pop, or 52-ounce plastic bottle. I’ll stick to whole foods and leave the reverse-engineered ones for the crazy cats who are willing to pay a premium to be lab rats. It’s simply unreal.

Alissa Hamilton is a former Food and Society Policy Fellow with the Institute for Agriculture and Trade Policy. She is the author of Squeezed: What You Don’t Know About Orange Juice, and the soon to be released Got Milked? The Great Dairy Deception and Why You’ll Thrive Without Milk. 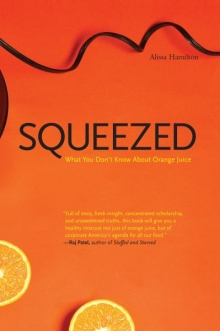