The Salt March, which Mahatma Gandhi launched in March of 1930 constitutes a watershed in India’s independence struggle and as such, we might be tempted to view it as a single decisive event which brought the struggle to a boil. It was, however, more like a series of skirmishes with increasing intensity, covering a period from March 12, 1930 to May 21, 1930. On March 12, Gandhi commenced his march from Ahmedabad; on April 6 he reached his destination, Dandi: the next day, on April 7,  broke the Salt Law, which made salt a British monopoly, by picking up a lump of natural salt from the seashore; the next day, on April 8, he broke the law again at a village near Dandi; the British government finally arrested him on May 5, when Gandhi upped the ante and began planning a non-violent “raid” on the Dharsana Salt Works, around 150 miles from Bombay.

The series of events, as they actually unfolded on May 21, 1930 provide an answer to our question. A raid is usually associated with an armed force and what is remarkable is that Gandhi’s followers indeed prepared for it like an armed force, except that they were unarmed. Just as an army usually consists of volunteers, they were all volunteers. Just as soldiers in an army wear a uniform, Gandhi’s followers also were dressed in their own livery, consisting of white dhotis and Gandhi caps. Just as an army fights for a cause, the Gandhi volunteers were also fighting for a cause—that of India’s freedom. And just as an army has its engineering core and its medical core, Gandhi’s volunteers were carrying ropes to scale the barbed-wire fence surrounding the Dharsana Salt Works, and stretchers with blankets to carry away the comrades who might fall in battle. And just as an armed force is led be a general, the volunteers were led by Mrs. Sarojini Naidu, as Gandhi was in jail. She, according to one biographer, even “resembled to an extraordinary degree the ancient Rajput, princesses who led their armies into battle.” 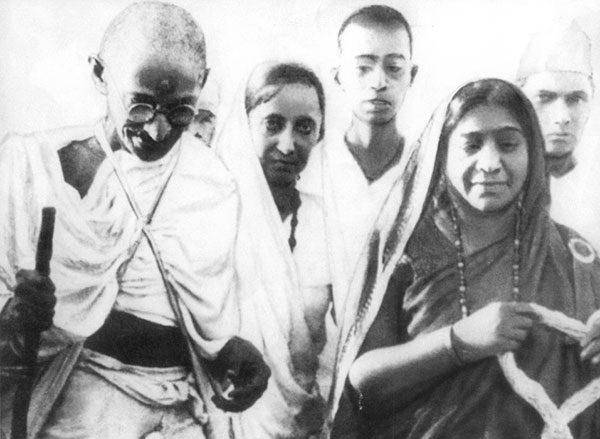 Then all at once the policemen, upon a word of command, advanced towards them, and started beating them with their steel-shod sticks, called lathis, upon their heads. So far the setting had been just like that of any armed raid.

What happened next, however, was quite inconsistent with an armed raid. Am armed raid involves a violent attack by the raiders. But Gandhi’s volunteers did no such thing. And when the policeman attacked them, Gandhi’s volunteers did not retaliate. They did not even raise their hands to fend off the blows. According to the account of Webb Miller, the American journalist who was an eye-witness to the event, Gandhi’s volunteers “went down like ten-pins.” After one column had thus been moved down, as it were, and the wounded removed on stretchers, another picked column advanced and was similarly knocked down. As Miller describes the scene, “the police rushed out and methodically and mechanically beat down the second column. There was no fight, no struggle, the marchers simply walked forward till struck down.”

Then another column advanced to meet the same fate. And so it went on until the weather became too hot for the action to continue. Miller counted 320 wounded and two dead. In terms of the casualties then too it was like an armed raid, inasmuch as this non-violent raid also produced casualties as in a war.

Arvind Sharma is the Birks Professor of Comparative Religion at McGill University. His book Gandhi: A Spiritual Biography was released in paperback last fall.