Today we’re talking revolutions. We recently spoke with historian Janet Polasky, whose latest book Revolutions without Borders: The Call to Liberty in the Atlantic World discusses the eighteenth‑century travelers who spread new notions of liberty and equality during the time of the American Revolution. What emerges is that the dream of liberty among America’s founders was part of a much larger picture—a dream embraced throughout the far‑flung regions of the Atlantic world.

Yale University Press: What was the inspiration for your book?

Janet Polasky: Years, actually decades ago, as an undergraduate studying in London, I discovered a misfiled letter from Thomas Paine in the Public Records Office. That letter introduced me to unlikely alliances among London mechanics, Parisian lawyers, and abolitionists from Philadelphia—eighteenth-century revolutionaries I had never met before. I have been running into Paine’s itinerant friends ever since, negotiating with Barbary pirates to free hostages, distributing shoes to French armies on behalf of English radicals, spearheading an insurrection in Saint Domingue to free the slaves with funds gathered in London and Charleston, and sliding down bed sheets to escape a hanging in Dublin.

The revolutionaries I encountered in the archives, men and women, black and white, ignored borders. Their international struggles for universal human rights do not fit neatly into national histories. So, why, I wondered, do historians divide this revolution into self-contained national stories? Actually, I think I know. That’s where we get our stories of founding fathers.

YUP: Who are some of those border crossers?

JP: Thomas Jefferson’s next-door neighbor was one. A Tuscan merchant who enthusiastically adopted the American revolutionary cause as his own, Filippo Mazzei later served as the Polish king’s emissary in revolutionary Paris. Or Anna Falconbridge, whose journal describes the settlement of black loyalists from America in Sierra Leone—to her mind, “a premature, hare-brained, and ill-digested scheme.” Joel Barlow, the Connecticut poet turned entrepreneur distributed shoes to French soldiers on behalf of London radicals, and negotiated with Barbary pirates for the release of hostages. Or there was Vincent Ogé who, frustrated by laborious, equivocating French debates over slavery, sailed back to Saint Domingue to lead an insurrection demanding rights for all people “without regard to race.” He was joined by veterans of the American Revolution.

The Dutch Patriot Gerrit Paape, who set out from Amsterdam with just a sleep sack and two false passports, asked the wife he left behind, what could be more enticing than to join revolutions all over Europe that promised to humble aristocrats and to dethrone emperors? Most of them would have agreed with Paine that “a share in two revolutions was living to some purpose.” Paape found a share in four.

YUP: Where did these revolutionaries from different countries and continents meet?

JP: Sometimes aboard ship. From hammocks slung across the back deck of the Sensible, a young John Quincy Adams and the French diplomat François Barbé-Marbois observed the keel hauling of a slave aboard a passing corsair. The English poet, Helen Maria Williams conversed with French Jacobin Maximilien Robespierre, German chronicler Georg Förster, Venezuelan general Francisco Miranda, and Polish revolutionary Thaddeux Kościuszko, among others, in her Paris apartment. Spies monitored coffee houses from Brussels to Manchester to Le Cap, reporting on newspapers read aloud and incendiary conversations overheard. Revolutionaries also connected through notes scrawled in the margins of pamphlets passed from hand to hand. Encounters on the page transformed readers into revolutionaries.

YUP: What role did café and club culture play in spreading revolutionary ideas?

JP: In newly constituted republics on both sides of the Atlantic, men and women who had never before enjoyed the privilege of considering the affairs of state gathered in public spaces beyond parliaments and state houses to read newspapers and to discuss politics. These were not Jefferson’s ideal revolutionaries, sufficiently “at leisure to think, the men of letters, the easy bourgeois, the young nobility,” but as in the London Corresponding Society, they were men, and a few women who “had finished their daily labour,” and gathered to smoke their pipes and to discuss “the hardness of the times and the dearness of all the necessaries of life . . . and parliamentary reform.” This rowdy world populated by political outsiders echoed with revolutionary possibility.

YUP: In your book, you mention that the eighteenth century marked the first time that travel lay within the grasp of even women and men of modest means. How did this affect the spread of revolution?

JP: Before, travel had been the exclusive domain of the wealthy for whom the Grand Tour completed their claim to culture. Now adventurous men and women of middling means could cross mountains, borders, and even the Atlantic, though enduring the cramped, stinking cabins tested the fortitude of many.  Not only did they carry ideas from one revolution to ignite another, but travelers, then as now, often saw the world differently from neighbors who stayed behind. At home and abroad, these itinerants challenged the shortcomings of national compromises in what they saw as a new world without borders. Travel “put national prejudices in perspective,” the American entrepreneur, Elkanah Watson noted.

YUP: So did the American Revolution really “begin the world anew” as Paine thought it would?

JP: In short, yes. Merchants carried Common Sense across the Atlantic. No sooner did it land in a Dutch port than it was republished in newspapers circulating across the European continent. Slaves in Jamaica overheard dinner table conversations about the American patriots’ claims to liberty. French journalists, claiming to be Americans, took up the cause of Genevan watch makers demanding citizenship. On the coast of Sierra Leone, former American slaves who had traveled to Freetown by way of Nova Scotia, allied with Temne and Mori-Kanu warriors to defend their right to self-rule. That’s why Paine toasted not just American independence, but “the Revolution of all the world,” in London in 1792.

YUP: What other revolutions sprung directly from the export of American and French ideals?

JP: The “universal call” to revolution reverberated from America to Geneva in 1782, the Netherlands in 1787, the Belgian provinces and Liège in 1788, and France in 1789. From Paris, revolutionary sparks ignited what a Dutchman called “the tinder of the Old Regime” in Saint Domingue, Guadeloupe, Poland, Martinique, Sierra Leone, Ireland, Italy, and Hungary. It resounded in small city-states as well as large nations. Sometimes, it fizzled out and other times, imperial armies amassed to squelch it.

The Atlantic world had never been so tightly interconnected as it was between 1776 and 1804. The fifteen thousand people who assembled in Le Cap in Saint Domingue to vote to abolish slavery inspired the French commissioner to proclaim “Men are born and live free and equal in rights.” The promise of liberty had flowed in with the tide; the threat of insurrection flowed out just as readily. Nation-based histories have not done justice to the interchange of ideas in an age of itinerant revolutionaries.

YUP: How did revolutionary concepts to travel?

JP: Documents had legs. Words traveled; they were no respecters of borders. From the obvious—pamphlets, newspapers, and diplomatic decrees—to letters, novels, and even rumors, words were invested with the power of persuasion. Fortunately for historians, we have a paper trail to follow: letters from husbands and lovers dispatched on diplomatic missions, sent home on packet ships; pamphlets transported in pockets and annotated in margins by fellow travelers; newspapers reprinting accounts of clandestine meetings in Warsaw and Charleston; diaries, some intended for publications, others not; and the rumors recounted that tell us more than the teller intended. Finding them in attics and tracking them through archives has a history of its own.

YUP: What are the political implications of your research into revolutions?

JP: History doesn’t repeat itself, but historians do. Having privileged the two large revolutions that established nation states that endured into the present, we look for our founding fathers’ plans for democracies everywhere in every upheaval, from Romania to Egypt. We are then inevitably frustrated at what we find. Without an understanding of the rich variety of revolutionary possibility in the past, we are condemned to judge the present through the blinders of a limited set of one or two national narratives. Border crossers have much to say to readers living in a world where revolutions of all sizes have varied, unpredicted, and interconnected outcomes. We ignore them at our peril.

Understanding flows in both directions, from the past to the present, and from the present to our understanding of the past. The interconnections of today’s global society are inescapable. So why should we imagine that the founding fathers who dreamed of liberty lived in isolation? Two centuries before the Arab Spring, without social media or even an international postal system, ideals of liberty and equality in all their variations and accents motivated philanthropists transporting freed slaves to Sierra Leone, haunted governors of Caribbean colonies, informed novelists, and were proclaimed by revolutionary armies marching down the Italian peninsula.

YUP: Is this a history with a happy ending?

JP: Not really. Thomas Paine did escape the guillotine after imprisonment in Paris, but just barely. His cell mate, the self-proclaimed Orator of the Human Race, the Dutch revolutionary Anacharsis Cloots was not so fortunate. Paine himself, hunted in England and unwelcome in America, felt at home in no country. Revolutionary regimes solidified and returning revolutionaries found themselves homeless between the new nations. A few became convinced counter-revolutionaries, but more held fast to their ideals, even as they found themselves out of step with national politics. Their challenging critiques, the prescient questions they posed, and the hypocrisies and paradoxes they probed, remain vivid evidence of the struggle for human rights that has connected a cosmopolitan Atlantic world for more than two hundred years.

Janet Polasky is Presidential Professor of History at the University of New Hampshire. She is the author of the prize-winning Revolution in Brussels, 1787 1793, The Democratic Socialism of Emile Vandervelde: Between Reform and Revolution, and Reforming Urban Labor: Routes to the City, Roots in the Country. Her book Emile Vandervelde, Le Patron won the Pierlot Prize in Contemporary History. Her latest book is Revolutions without Borders. 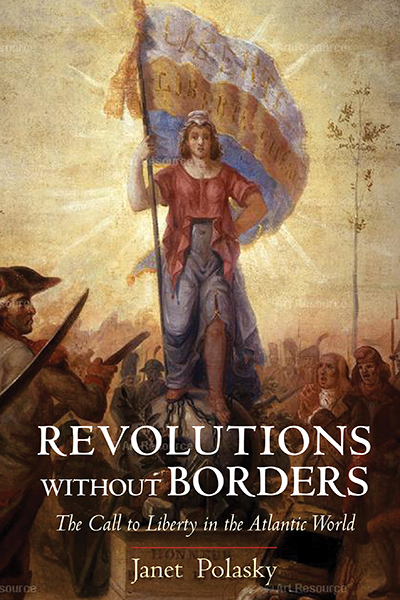