CIA Headquarters Building at Night by David Mark via Pixabay

While writing Patriotic Betrayal, which chronicles a major Cold War covert operation with the U.S. National Student Association, I began a file in which I collected evidence of renewed covert activities in the late 1990s. The newspaper clips came from different parts of the globe in little media bursts of charges and denials, like seeing a whale breach and knowing a pod is just beneath the surface. The question arises: did we learn any lessons from twenty years of Cold War covert operations?

Patriotic Betrayal concluded with an assessment by CIA-knowledgeable (witting) participants of the stratagems used to win friends and punish enemies. Their judgment? Few actually worked.  This was true whether the witting students created phony foreign student unions, known as ghosts, that collapsed as soon as their purpose had been served, or aided the CIA overthrow of Iraqi ruler Abd al-Karim Qasim in 1963, that instead paved the way for the rise of Saddam Hussein, or backed Algerian revolutionaries in the hope of a gaining friendly post-colonial Algeria in 1962, hopes that were dashed when Algerian President Ben Bella allied with Cuba’s Fidel Castro.

By the mid-1960s, ideas for covert projects had grown more creative or more absurd, depending on your point of view. For example, the NSA-CIA team considered obtaining a worn out Soviet tanker and creating an oil spill off the coast of Algeria during the 1965 World Youth Festival in Algiers. To what end? The worn out tanker would signify a failed Soviet economy, and the oil spill a lack of environmental sensitivity. In this case, events overtook the scheme. President Ben Bella was overthrown, the festival cancelled, and the oil spill never materialized.

In the wake of 9/11, my collection of clippings grew. Articles, newspaper columns, and reports advocated a return to Cold War-style covert operations. Titles such as “Covert Operations: Now More than Ever,” or an International Herald Tribune op-ed by Richard Holbrooke that subtly signaled his backing for new CIA action, or a 2007 Rand Corporation report, “Building Moderate Muslim Networks,” that made the historical analogy explicit, albeit using sanitized language. The U.S. Government officials should build “parallel structures” and give them “benign guidance.”  Did the authors know anything about Cold War operations, I wondered? I dubbed my growing clip file, The Golden Age.

The tongue-in-cheek title didn’t mean that I wasn’t concerned. I was. Take the phony Twitter account in Cuba established secretly in 2010 with funds from the United States Agency for International Development (USAID), called ZunZuneo, apparently Spanish slang for a Humingbird’s chirp. Yes, this phony twitter account, designed to build a base of freedom-seeking Cubans, had as its ultimate goal the creation of  “smart mobs” that would create a Cuban Spring and finally—once and for all—overthrow Fidel Castro’s regime. ZunZuneo was a textbook case of covert action, a project designed to disguise the hand of the U.S.  Government. USAID funds went to two private U.S. Companies, Creative Associates and Mobile Accord. As usual, one big secret requires lots of little ones. In this case, additional front companies were needed to disguise the publicly recognizable ones, and therefore the U.S. origins of the Twitter account. ZunZuneo’s “creative” entrepreneurs met secretly in Spain and other foreign capitals; like many Cold Warriors, they enjoyed a little foreign travel on the taxpayer’s dime while they plotted.

Not only did the project fail to overthrow Castro but, according to Catherine A. Traywick in Foreign Policy, its net effect was to supply intelligence to the Castro government on 40,000 twitter participants. It seems the covert operators overlooked the fact that the Cuban government owned the internet infrastructure.

Yet, when the Senate Foreign Relations Committee examined the failed project at a televised hearing on April 8, 2014, I listened in disbelief as the debate turned on whether ZunZuneo was a “discreet” or a “covert” project. The Democratic Chair, Robert Menendez from New Jersey, a fierce anti-Castro Senator, stubbornly insisted it was discreet. Senator Jeff Flake, a Republican from Arizona, made perhaps the most cogent remark, saying, in effect, you can call it covert, you can call it discreet, I call it silly.  His remarks were echoed by Senator Patrick Leahy, Democrat of Vermont, who called it “dumb, dumb, dumb.” Leahy also pointed to how the Twitter project endangered USAID employees around the world, some of whom had contacted his office.

The Obama White House echoed the “discreet” defense, and pointed its finger toward Congress, since it had appropriated USAID funds. No one in Congress or the White House worried, at least openly, about the information newly amassed by the Cuban government. Did officials grasp what the exposure of the Cuban caper meant for dissidents throughout the world who are using social networks to organize, and who are often urged on by the U.S. Department of State? Was there a faster way to sow distrust of social media? Of course, in the wake of Edward Snowden’s disclosures, we know the answer is yes—through massive electronic surveillance.

But the ZunZuneo project is also an example of something I found characteristic of covert Cold War student operations: large and unrealistic hopes were often attached to covert projects. A friendly Algeria, for example, was to have enhanced U.S. prestige across all of North Africa, and even the Middle East. Support for anti-Batista Cuban revolutionaries was to demonstrate that the U.S. didn’t just support Latin American dictators. Not only does most covert meddling in politics fail, but the fallout or blowback, should the operations become public, and they usually do, is often the opposite of what was intended. Changing the adjective from covert to discreet suggests that we have a long way to go before we learn the lessons of the Cold War.

Karen M. Paget is a political scientist with more than 45 years of experience in academia, government (local, state, and national), philanthropy, and public policy. She holds a doctorate from the University of Colorado, as well as a M.A. in International Affairs. She is a contributing editor to The American Prospect, and has written on topics ranging from gender politics to the U.S. military budget. She is coauthor of Running as a Woman: Gender and Power in American Politics, and has lectured in Europe, Latin America, and Asia. In 1998, the Open Society Institute awarded her a fellowship to write Patriotic Betrayal. 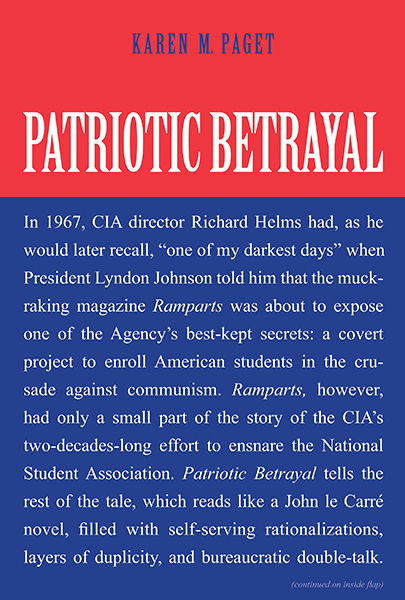