When I started out in astronomy, the Big Bang theory was just becoming accepted as a good description of the Universe in which we live. But there was one big problem with it. Nobody knew how old the Universe was.

The age of the Universe is related to how fast it is expanding. If it started out small and hot (in the Big Bang), then to get to its present state obviously takes less time if it is expanding quickly than if it is expanding slowly. This key expansion rate is worked out by measuring redshifts of distant galaxies, which tell us how fast they are receding from us, and comparing these with their distances. Combining the two measurements makes it possible to infer how long ago the expansion began. Measuring redshifts is straightforward and gives unambiguous results, although it requires great technical skill. But measuring distances was the problem.

Astronomers measure distances by comparing the apparent brightnesses of different objects which are known to have the same intrinsic brightness. These are known as “standard candles.” This is like measuring the distance to a 100-watt light by measuring how bright (or rather, how faint) it seems to be.

The favoured standard candles used by astronomers are a family of stars known as Cepheids, which brighten and fade in a regular way that is related to their intrinsic brightness. But observations of Cepheids in distant galaxies are very difficult, because of the obscuring effects of dust in space, the varying influence of the Earth’s atmosphere, and so on. As a result, estimates of the expansion rate varied widely in the years before the Hubble Telescope was launched. This rate is measured in terms of a number called the Hubble Parameter, H, and due to a wide range of estimates for H, estimates of the age of the Universe ranged from 8 billion to 16 billion years.

To resolve the puzzle, a study know as the Hubble Key Project was planned. This was the primary raison d’être for the telescope—to measure the Hubble Parameter (and therefore the age of the Universe) accurately (within 10 per cent) by using the Hubble Telescope to study Cepheid stars in  distant galaxies.

Although the Hubble team waited to gather all their data in one package before analysing it to produce an accurate measurement of H, they generously provided other astronomers with some of the Cepheid measurements as they went along. As a result, with my colleagues Simon Goodwin and Martin Hendry at Sussex University I was able to use their measurements in a more rough and ready approximate method, finding that the Hubble Parameter must be at the low end of the previously accepted range and that the age of the Universe is a little over 13 billion years; but we did not meet the “within ten per cent” criterion (see http://arxiv.org/abs/astro-ph/9704289v1). Just after we came up with our value, in 2001 the Hubble team itself presented their final analysis, inferring an age of 14 billion years plus or minus that promised 10 per cent. The team rightly received the  2009 Cosmology Prize of the Peter and Patricia Gruber Foundation, worth $500,000, for their work. Since then, other studies have pinned down the age of the Universe down even more precisely, to 13.8 billion years. This is one of the most profound results in all of science.  Everything else the Hubble Telescope has produced, including the stunning pictures of galaxies which made it a household name, is merely the icing on the cake.

John Gribbin is a Visiting Fellow in Astronomy at the University of Sussex and the author of many books including The Birth of Time, The Origins of the Future, Almost Everyone’s Guide to Science, and Stardust. Find more at his website and blog. 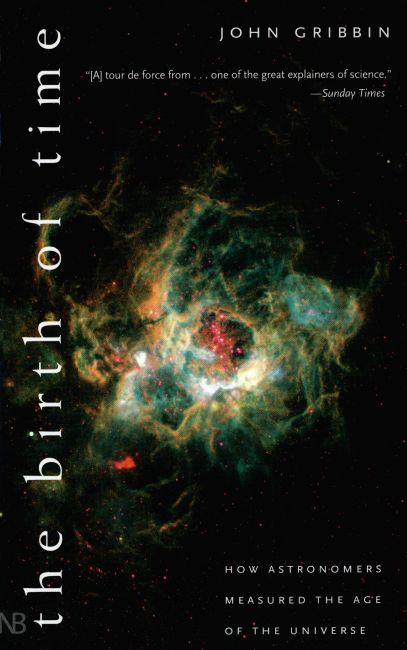