We stand on the edge of the centenary of Albert Einstein’s greatest achievement, his general theory of relativity.  It was a work that not only changed science, it changed how we think of science and the relationship between society and science.

In 1905, eleven years earlier, Einstein had published five papers – his doctoral dissertation on the statistics of mixing, a related paper that would help demonstrate the existence of atoms (something that was not universally accepted at the time), a paper on the nature of light that would be one of the founding works of quantum mechanics and would ultimately win him the Nobel Prize, and then a paper that introduced the world to the special theory of relativity and a short follow-up that gave us the most iconic equation in science, E=mc2.  It was the beginning of a scientific revolution.

But he was dissatisfied.  This new relativistic universe he had sketched had two limitations.  First, it included every known force in the universe…except one.  Gravitation was missing.  It seemed disconcerting that the theory did not have an organic place for one and only one aspect.  Second, the equations of special relativity only held for observers who are not accelerating.  You could see the world from different perspectives, but only if they were moving in straight lines at constant speeds relative to one another.  But the real laws of the universe should hold for everyone, whether you are on an escalator or on a carousel.

So, Einstein decided to expand his theory, to expand it to include gravitation and to generalize it to fit all reference frames.  But, the question was, how?  Then he had what he called “his happiest thought.”  Sitting at work in the patent office, looking out at the day, he watched the window washers high on a ladder.  He began to think about what would happen if one of them fell.  To the rest of us, this is a question of injury and of the person’s family having to care for him; but not for Einstein.  For him, the thought of a man falling off a ladder meant that he would be accelerating in such a way that he would no longer feel his weight.  Gravitational freefall, he realized, was the same thing as being weightless.  This would become his “principle of equivalence,” the conceptual cornerstone on which the general theory of relativity would be built.

But laying the foundation and building the edifice are two different things.  He quickly realized that the mathematics he would need were far beyond his understanding and ability.  He needed help.  And when Einstein was required aid of any sort, there was one place he went – Marcel Grossmann.  Grossmann was one of Einstein’s dearest friends from college and his lifelong guardian angel.  When it was exam time and Einstein was unprepared because he had been cutting classes, Grossmann allowed Einstein to study from his detailed, organized, and complete account of the semester’s classes.  The two would finish first and second in the class.  When Einstein graduated, but couldn’t get a job because of his irreverent attitude towards his professors who would not hire him as an assistant or recommend him for such a post to any of their colleagues, it was Grossmann who turned to his father, a Swiss bureaucrat who secured a post at the patent office.

Grossmann had left college and received a Ph.D. in mathematics.  So, when Einstein needed new calculational tools, he went to see Grossmann.  The idea that Einstein had of connecting acceleration and gravitation would not only force us to combine space and time into a single four-dimensional space-time, but make it one that stretched and bent in intricate ways.  He could not even begin to conceive of the mathematical formalism that would be required to describe it.  Grossmann, on the other hand, knew exactly what was called for.  It was the latest thing in mathematical circles – the manifold-based geometry of Bernhard Riemann.  As luck would have it, that was exactly the topic of Grossmann’s recently completed dissertation.  He was one of the small handful of experts in the field and he could tutor Einstein in it, teaching him everything he needed.  Or, so Einstein thought.  Grossmann wasn’t so sure.  Yes, it was the mathematical machinery Einstein’s new work required, but, Grossmann feared, it might prove to be too difficult for mere physicists to understand. 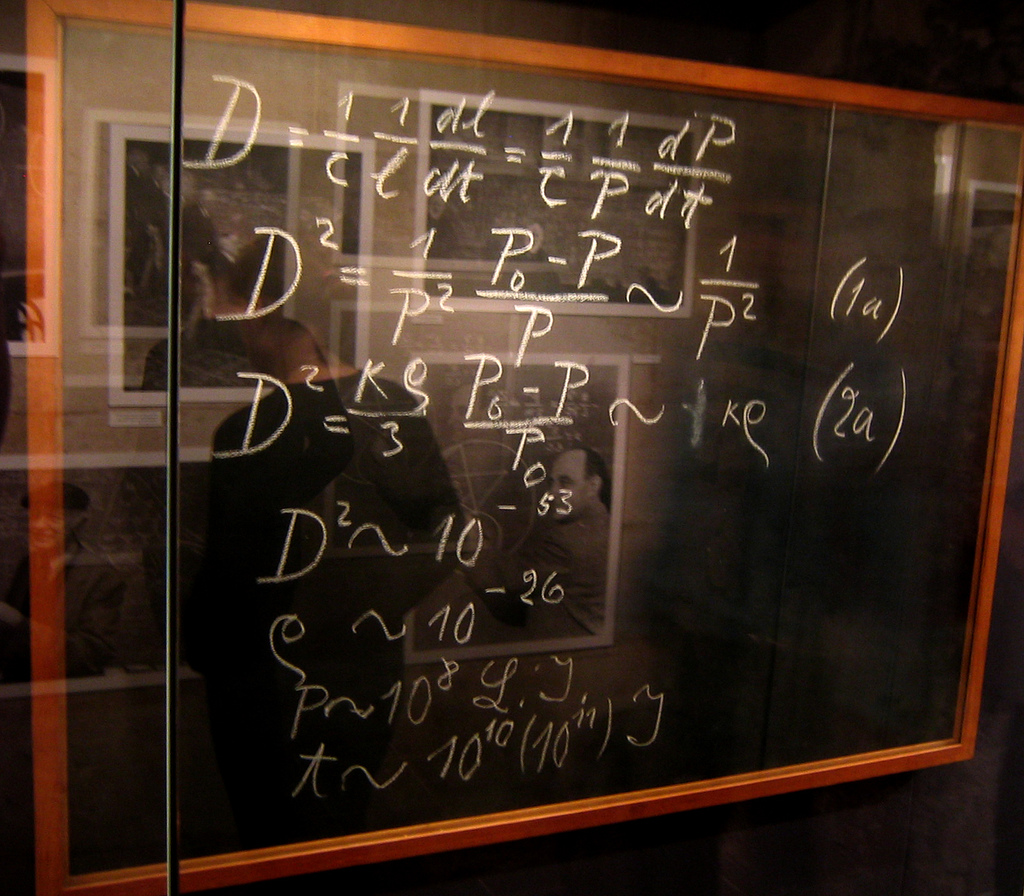 But Einstein did understand it (mostly, anyway) and he did use it to produce the field equations of his general theory of relativity which stands as one of the greatest achievements of the human mind.  But Grossmann’s fears were warranted.  The difficulty and intricacy of the theory required that only a small minority would be able to master it.  With the overt oddity of the quantum theory that was to follow it, physics became alien to the larger society.  What came from physicists seemed too weird to be true, if it could be even partially understood.  Einstein, with his strange hair and slovenly dress, became a symbol.  The physicist is someone who removes himself from the ways of the culture, from its fashions and expected rituals and social norms.  Physics, and science in general, was for geniuses, not regular people.

This chasm between science and society has remained.  The theory of relativity and the theory of quantum mechanics combined to give us nuclear power and nuclear weapons.  The results of science shaped the world, but the practice of science became less and less a part of it.  Science education became focused on producing the next generation of researchers and engineers, on training.  But training is not the same as teaching, and the lack of scientific literacy in the general population has become problematic at a time when the problems we face, like global warming, require us to combine scientific results with policy concerns.

Einstein was no stranger to political worries, indeed, he was quite active politically, both in Germany and his later home in America.  For him, the two were part of a broader stance toward the world, a stance that we would do well to emulate – even if you prefer more fashionable clothing and hairstyles.

Steven Gimbel is the Edwin T. and Cynthia Shearer Johnson Chair for Distinguished Teaching in the Humanities as well as chair of the philosophy department at Gettysburg College.