A Controversial Tablet Displaying the Ten Commandments by Kevyn

In 2001, Roy Moore, the Chief Justice of the Alabama Supreme Court, installed a massive monument featuring the Ten Commandments in the courthouse rotunda. When ordered by a federal judge to have it taken away because it violated the establishment clause of the U. S. Constitution, Moore refused, and he was subsequently removed from office by state judicial officials, and the monument was removed from the courthouse. Still, Moore was reelected Chief Justice in 2012.

The Ten Commandments continue to be a lightning rod in the cultural and political battles that divide our country. On April 8, 2015, Governor Asa Hutchinson of Arkansas signed “The Ten Commandments Display Act.” The law requires the Secretary of State to have a monument featuring the Ten Commandments placed on the grounds of the State Capitol. In an apparent effort to avoid legal challenge, the text is to be the same as that on the monument on the capitol grounds in Austin, Texas, which was declared constitutional by the U. S. Supreme Court in 2005.

But the Supreme Court (in Van Orden v. Perry) did not explicitly endorse the actual text of the Austin monument, only the monument itself. And that’s a good thing, because the text of the Ten Commandments on both the Austin and the Little Rock monuments (and on hundreds of others around the country) doesn’t correspond exactly to any of the two or three versions of the Decalogue found in the Bible. Rather, it is a bowdlerized abridgement which strips the commandments of their historical specificity and conveniently removes some of their more questionable aspects. Gone are the references to the Israelites’ exodus from Egypt and their future possession of the Promised Land. Gone too is the designation of the seventh day of the week (Saturday) as the Sabbath, in imitation of the divine rest after the supposed creation of the world in six days. And gone are the descriptions of God as punishing sons, grandsons, and great-grandsons for sins of their fathers and not absolving anyone who misuses his name. These are not just minor omissions. They change the text from a specific set of laws reportedly given to a specific group at a specific moment in history to a bland and nonsectarian yet still monotheistic set of rules. They also conveniently forestall questions of observance, scientific accuracy, and challenging theology.

Also missing both in this abridgment and in the original is what the “The Ten Commandments Monument Display Act” claims the Decalogue represents: “a philosophy of government . . . that God has ordained civil government and has delegated limited authority to civil government . . . and that God has endowed people with certain unalienable rights, including life, liberty, and the pursuit of happiness.” In fact, the Ten Commandments say nothing about government. The legislators obviously have conflated two sources, the Ten Commandments and the Declaration of Independence. But these two canonical texts, written thousands of years apart, are not entirely compatible. The last commandment on the proposed monument reads:

What this means is that a man’s property is off limits; in the original Hebrew, the commandments are addressed only to males. Significantly, a man’s property includes not only his real estate and his cattle, but also his wife. And not just his wife: the word quaintly and misleadingly translated “manservant” in the King James Version followed in the proposed monument’s text really means “slave.” This is clear at the opening of the Decalogue, which in the Bible literally says, “I am the Lord your God, who brought you out from the land of Egypt, from the house of slaves” (the monument’s text reads simply “I am the Lord thy God”). By divine sanction, then, the last commandment (like the Sabbath commandment in its unabridged form) is implicitly proslavery. Thus, neither liberty nor happiness are rights for “people” (the bill’s soft and vague rephrasing of the Declaration’s “all men”) in the Decalogue, unless they happen to be free adult males.

Finally, it is profoundly ironic that a bill that falsely claims that the Ten Commandments support limited government requires the government to impose on its citizens a divisive symbol, an imposition antithetical to the underlying spirit of both the Bible and the Declaration.

Michael Coogan is director of publications for the Harvard Semitic Museum, lecturer on Old Testament/Hebrew Bible at Harvard Divinity School, editor of The New Oxford Annotated Bible, and author of God and Sex: What the Bible Really Says. 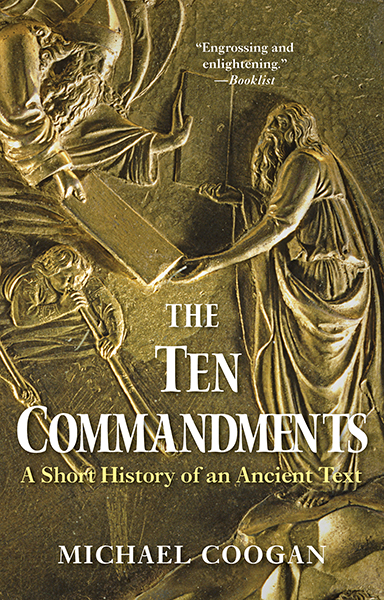