Ets Haim Library, the Oldest Jewish Library in the World (cropped and resized) by Jessica Spengler via flickr.

The Posen Library of Jewish Culture and Civilization will be a ten-volume collection of 3,000 years of Jewish literature, artwork, and artifacts. We sat down with Felix Posen, who conceived the project, to ask about his hopes for the anthology, his perspective on secularism, and his thoughts on technology and preservation.

Yale University Press: What has been your personal history with the Jewish tradition? How have your views changed from childhood to the present?

Felix Posen: I was born in Berlin in 1928 into what was known as a Modern Jewish Orthodox family. This meant that we kept all the religious traditions in terms of holidays, food, habits, schooling, and observance of the Mitzvot (Commandments), expected of a Jewish family at the time and, in my case, as a child.  After the pogrom known as Kristallnacht in Berlin in November 1938, my sisters and I became refugees and emigrated to the USA, via Holland, and the UK. In New York, our parents having joined us, we lived in an area heavily populated by German Jewish refugees, and I therefore continued my Jewish studies in a school associated with the synagogue in which we worshipped. After graduating high school I went to Johns Hopkins University in Baltimore, where I also kept to a Jewish way of life. After graduating and returning to my parents in Manhattan, I met a first cousin, a young woman who had survived Auschwitz. Her detailed stories of her life during these horrifying years made me turn away from religion as I felt that no God could exist that would allow such things to happen to innocent men, women, and children. So, essentially, at the age of 20, I carried on with my life, just as before, but no longer obeyed the Jewish laws and precepts such as Kosher food, or observance of the commandments required during holidays, etc.

YUP: Do you think your life would have been different if you had had access to such information as the anthology and digital library while growing up?

FP: I doubt my life would have changed if I had had access to the anthology during my youth as such literature would have been forbidden to me. The change in my life came about through my discovery of the events of the Holocaust, as told to me by my cousin, and my subsequent belief that a God could not exist.

YUP: Why do you think so much of Jewish education is primarily religious?

FP: As far as I know, Jewish education has been, since time immemorial, primarily religious. Those Jews who left religion generally also left the study of Judaism—until perhaps some time around the 19th century when, through the Enlightenment, some aspects of Jewish education started to change with the introduction of new historical processes in Jewish thought and culture. The 19th century also saw the start of new forms of Jewish observance through the nascent denominations such as Conservative, Liberal, and Reform, etc, and a new way of Jewish study, particularly in Germany, known as “Wissenschaft des Judentum.” So the concept of teaching Judaism as a culture, and not only as a religion, started only around this time, certainly in Europe. There were other attempts in the USA early in the 20th century.

YUP: How would define a “secular” Jew?

FP: I define a “secular” Jew as a person who considers themselves Jewish but no longer observes all the commandments of Jewish religion. I am obviously referring to leaving the way of life, and observance of the Mitzvot in terms of holidays, fasting, synagogue services, etc—and not to the giving up of the accepted universal ethical Ten Commandments, such as not killing, stealing, or lying, etc.

YUP: How would you like the public or universal perception of Judaism to change after these volumes have become more accessible?

FP: The purpose of the Posen Library is not to change the perception of Judaism but to give access to the immensely rich cultural, ethical, philosophical, and artistic creativity and history of the Jewish people over the last three millennia, without the need of religion.

YUP: Who do you believe will benefit the most from the anthology?

FP: The anthology will be a major reference work for all Jews, particularly non-religious Jews—and indeed non-Jews who might be interested—who do not, and have not studied religious texts and have no concept of what Judaism is beyond religion. I hope it will show that in addition to religion, Judaism has produced a massive amount of work in non-religious fields in terms of literature, art, music, theatre, science, and philosophy, etc.

YUP: Have you reached out at all to the non-Jewish community?

FP: No, we haven’t, although I believe many non-Jews would be amazed to learn that Judaism is a hugely rich culture, and not only a religion, as they might believe. Some people are probably very familiar with this culture, whilst being unaware of its Jewish origins.

YUP: Jews and Words, written by Amos Oz and Fania Oz-Salzberger, was published in order to accompany the volumes on The Posen Library of Jewish Culture and Civilization. Has the book had the desired effect of promoting the anthology?

FP: Jews and Words is an amazing success. It is available in 12 languages, and both Amos and Fania are in continuous demand to lecture on the book. It sort of serves as an “introduction” to the anthology and, indeed, that was the purpose of its inception, but as the anthology is so far behind schedule, it has taken on a life of its own, independent of the Posen Library.

YUP: How has technology been able to benefit this mission?

FP: Technology has played an immensely important part in this project in helping to gather together and publish the massive amount of information required in a readable form, ie. digitally. The real benefit will obviously only be seen in five or ten years from now when, hopefully, the whole anthology will have been published. The original estimate of perhaps finishing the entire anthology in ten years was hopelessly over-optimistic. The volume of information available in each period covered by the anthology has overwhelmed the editors of every volume, and with increasing relevance those involved in the more modern periods of the project. Nobody had a real idea of how much existed in their own periods, despite their respective expertise. Technology also, of course, made it possible for more than 100 people in different parts of the world to be involved in the project and to work together. In addition, the Posen Digital Library will be available for free, online, to anyone who is interested, including teachers and students, and will include almost the entire contents of the print volumes.

YUP: Have you heard any feedback yet on the reception of the published volumes?

FP: It is really too early to have heard much feedback as only one volume has been published. I believe we will have to wait another five or ten years before we can properly analyse the reaction to the whole project. However we have received quite a number of compliments from scholars, librarians, editors, and booksellers; the media coverage has been quite positive, and some of the reviews both enthusiastic and very intelligent.

YUP: Why do you think such a project has never been attempted before?

FP: The main reason nobody has attempted such a project before is because for more than three millennia Judaism was only thought of, and taught, as a religion, and produced a huge output of religious works. The idea of Jewish literature from a cultural point of view is a fairly modern phenomenon, probably not much more than 300 years old and starting, slowly, with Spinoza, gaining pace century by century, and particularly over the last few decades. I am also not sure that there was a way to start such a project before the advent of modern technology, nor perhaps anyone with the desire to do so.

YUP: Has historical preservation become a bigger issue today than it has been before?

FP: I am not an historian and therefore cannot judge if what you call “historical preservation” has become more important than it was before.  I must assume that there has always been a desire for such in each period of history, but the subject matter and content has changed radically as we enter the more modern periods of the 19th and 20th centuries.  So the historical preservation of Judaism as culture has not really become bigger than before, but has a more shifted emphasis from preserving it not only as a religion, with religious precepts, but to include looking at it as an unbelievably huge, rich, and deep culture existing side-by-side with religion over the last two or three centuries.

YUP: You once said that, “Each generation must struggle to make sense of its legacy.” What do you want your legacy to be, and is it tied to the legacy you want for the Posen Library?

FP: The legacy of the Posen Library will be determined by those who read it; both Jewish and non-Jewish. I hope it will be examined, analysed, discussed, and studied in depth for time immemorial. I also hope that the anthology will propel the teaching of Judaism as culture, a subject that required a thorough literary back-up to be successfully taught. This is meant to be an essential tool and reference work to push forward the teaching of the fascinating field of Judaism as culture. 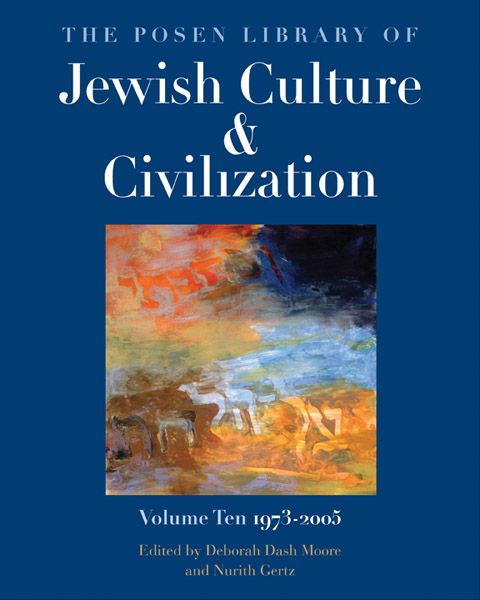 And be sure to visit the Posen Digital Library to explore the entire collection online.