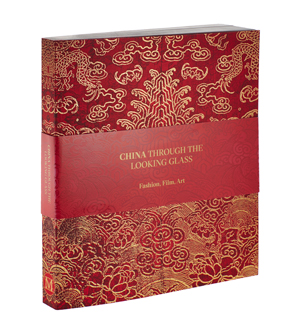 China: Through the Looking Glass accompanies the new exhibition organized by The Costume Institute in collaboration with the Department of Asian Art, on view through August 16, 2015, in the Chinese art galleries and the Anna Wintour Costume Center. This unique book explores the West’s fascination with Chinese fashion, film, and art, and how this influences Western fashion design. The catalogue is illustrated with new photography by Platon that juxtaposes historic and contemporary fashions from both China and the West, along with Chinese decorative art objects, to reveal the rich and ongoing creative dialogue between East and West, past and present.

Best known for his compelling portraits of world leaders, Platon spent several months photographing couture garments from designers such as Christian Dior, Jean Paul Gaultier, Karl Lagerfeld, Alexander McQueen, and Yves Saint Laurent, as well as traditional Chinese costume and decorative art objects. I spoke with him about the book, his work, and the importance of artists as cultural mediators.

Rachel High: China: Through the Looking Glass explores how Chinese art and aesthetics influenced Western fashion. How did the topic of the book influence the photography?

Platon: I’m always looking for something authentic, so it’s natural that the photography comes from the work I’m presented with. This was a historic opportunity to have access to these extraordinary garments and artifacts. I was very keen to cross the border between art and fashion, and to photograph objects from the Met’s Chinese collection, as well as the dresses that were inspired by the artifacts themselves. I’ve traveled through China extensively, but it’s very different when you’re studying details of objects on which people have spent so much time, love, and attention.

The resulting photographs are a celebration of the material, and that’s why I think Andrew [Bolton, curator ofChina: Through the Looking Glass] and I worked so well together. Andrew has a very powerful story to tell, and my job is to bring that alive while not being academic and not letting an outside sense of fashion or style distract from the garment. I’m a modernist, so for me, less is more. Form follows function; if the dress is tailored in a very specific way, that initiates the final structure of the picture.

What’s really extraordinary, above all, is that no two pictures look alike. We have really found a way of bringing the personality out of each garment by creating a sense of neutrality with the studio and the mannequins. This is a celebration of the garments, of the intricacy of the stitching, and, in some cases, just a button. I’m using a modernist idea: respect your materials. Cut, shape, color, and motif—this is a visual language that we have created.

Rachel High: You are probably best known for your portrait work. How did you approach this photography without live models?

Platon: We didn’t approach this as a fashion shoot; it was a portrait shoot, going for authenticity and a sense of truth. I started out as a fashion photographer, so I’ve always had a deep respect for fashion, style, and self-expression, and I’m very aware of the important role a fashion designer plays in society. Much of my recent work deals with political figures and human-rights issues around the world. This project was a lovely homecoming; as I became more entrenched in politics and activism, I had been doing less fashion work. When Andrew came to me with this incredible project, it was an amazing opportunity to get back into something that I haven’t dealt with in a long time.

It is also very important to ask why the show and the book are so important, and what I can bring to this, as opposed to someone who is perhaps better known for their fashion work. Having finished the project, I can now speak about this in a way that perhaps I couldn’t at the beginning.

I’ve photographed more world leaders than anyone in history—I’ve seen power up close and personal in a way that very few people have had the privilege to experience. I’ve worked intimately with Putin, Netanyahu, all the living American presidents, and tyrants like Gaddafi. I’ve also become entrenched in human-rights issues around the world. I use my photography to instigate change and celebrate people who have been robbed of power.

How is this related to the Met and this project? If you look at the high-speed globalization of the world today, we are exchanging information faster than at any time in history. However, culture does not move as quickly. You can do business transactions at the speed of light, but cultural differences take a lot longer to exchange between people. Globalization is pushing us to move faster, but this does not allow us to pay enough attention to each others’ culture in a respectful way, and, alongside that, there are political barriers and even wars between countries. Yet there’s always one group of people in society that has been able to cross from one culture to the other, and that’s the artists.

The artist’s role in society has always been to form a bridge that creates a dialogue between cultures. Despite the political challenges between two forces of power, artists cross this bridge with great freedom and admiration to say: “We don’t care about the political differences between our two ideologies, we respect each other. We love the way you use color, we love your motifs. It inspires us, and we want to pay tribute to them.” This book represents a celebration of self-expression in society and the artists—in this case, fashion designers who champion this culture. I think I’m most attracted to this project because I’ve seen how politics and power can hold people back, and I’ve also seen how human-rights abuses can push people down, but now I want to celebrate—in a positive way—how the fashion designers have managed to build a bridge across all of those problems and find great beauty in cultural differences.

This is a celebration of the beauty of culture and a reminder that, despite ideological and political differences, we are all just people finding different ways to express our humanity. I have been inspired so much by the amazing artworks, dresses, and garments I was able to capture and celebrate in photographs. I think this project is a celebration of bridge builders. If only the politicians and the power players could take some direction from the dialogue that’s gone on in fashion, you would find an incredibly different political outlook.

Rachel High: What have you learned about the pieces during the project?

Platon: I’ve learned about structure. I’ve certainly seen, again and again, how motifs are exchanged. For example, motifs that come from architecture find themselves rebuilt into shoulder pads. The use of color has also been extraordinary. It’s very interesting to see how the West interprets something that China has done. Obviously, they put their own spin on it and it’s brought into the context of Western design, and, again, that dialogue is an amazing celebration of respect between two ways of seeing and feeling.

I’ve learned so much. I’ve seen people behind the scenes dressing the mannequins, and it takes hours and hours, so it’s another reminder of the artistry that goes into having even just one of the garments fitted properly. The process and the incredible people that put things together behind the scenes has been inspiring beyond belief.

We are very aware of the importance of the show, when the garments will be presented to the public. However, the show only lasts a few months, and that’s when the book really comes into play, as the reminder of this incredible project. In many years, what we’ll be left with is the book, and so Andrew and I really gave it everything we had because we knew that this would not be just a catalogue, but a historical document that we hope will be timeless.