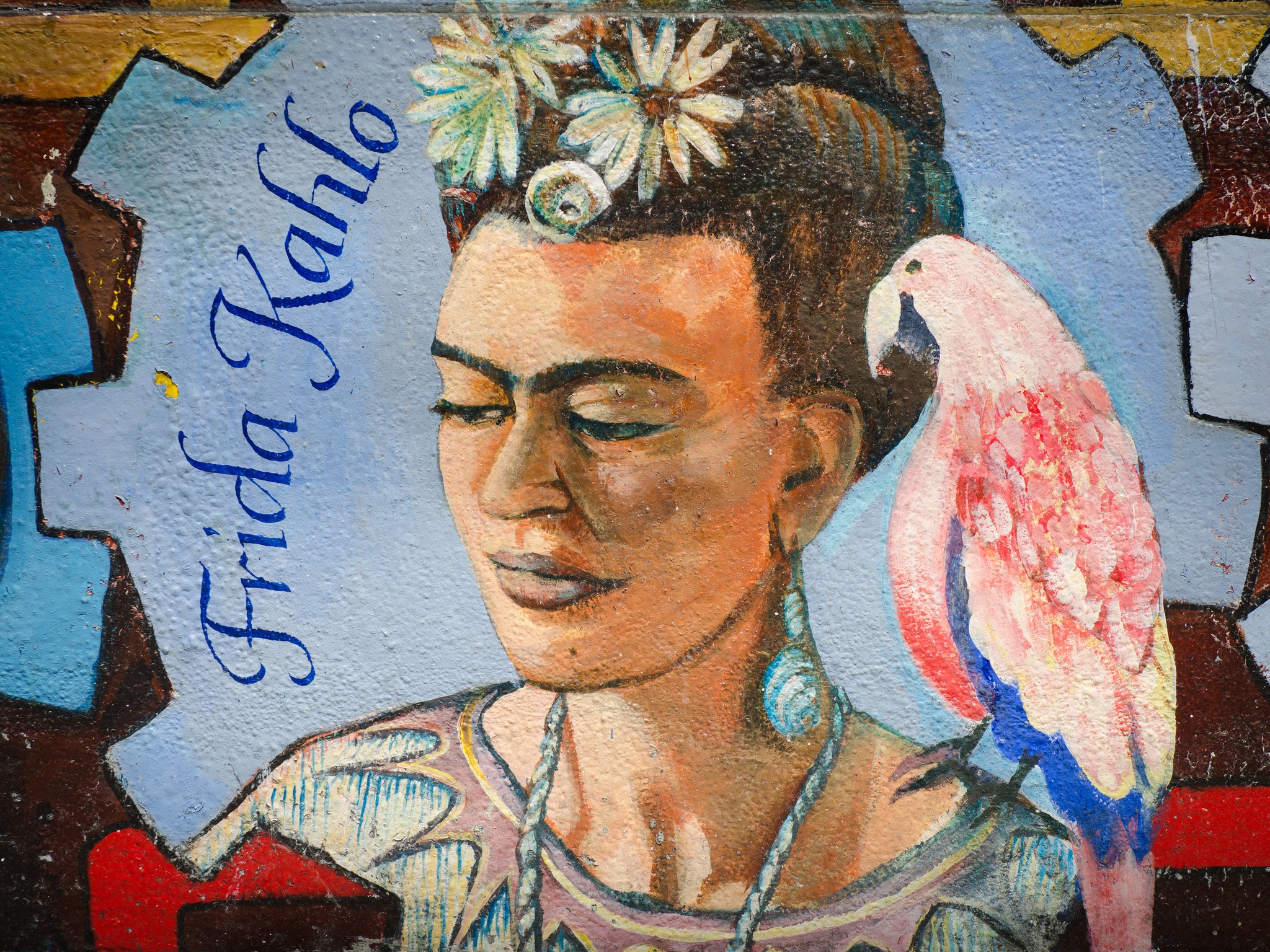 Image above is a photograph by Franco Folini of the Frida Kahlo mural in San Francisco, used with permission.

From the late 1920s through the 1930s, Mexican artists Diego Rivera (1886-1957), and his wife Frida Kahlo (1907-1954), were one of the most famous art-world power couples on the planet. At the time, Rivera was internationally recognized for his monumental public murals featuring poignant socialist themes. Kahlo at the time was best known in the tabloids primarily as Rivera’s eccentric, outspoken wife, noted for her colorful Mexican fiesta garb, which she wore on all occasions. It wasn’t until the late 1930s that she first gained recognition by her peers for her own formidable artistic achievements. In more recent years, of course, Frida has become a household name, by far the better-known artist of the pair, for her intimate, emotionally wrought, autobiographical paintings featuring imaginative, surrealist-tinged imagery.

A landmark exhibition currently on view at the Detroit Institute of Arts, through July 12, “Diego Rivera & Frida Kahlo in Detroit,” is the first show to explore in depth the artistic collaboration as well as the personal interaction between the two artists at a pivotal moment in their careers. Organized by independent curator Mark Rosenthal, the show contains some 70 works created by the artists during their nearly year-long stay in the Motor City beginning in spring, 1932. Presented on the site of the Detroit Industry frescoes, (1932-33), the majestic mural cycle Rivera completed in 1933, as an homage to the Machine Age and industrial workers, the exhibition is a unique event, and will not
travel. The accompanying book, sumptuously illustrated, and with essays by Rosenthal, as well as by a number of other scholars and experts, including Rivera’s grandson, Juan Rafael Coronel Rivera, is certain to become a key document in the fascinating field of 20th-century Mexican art. (Click here to read a guest post by the book’s designer, Roy Brooks.)

Born in 1886, in Guanajuato, Mexico, Rivera studied at the San Carlos Academy of Fine Arts in Mexico City. He traveled to Europe in 1907, and continued his studies in Paris. There, he befriended many of the avant-garde artists of the day, including Picasso, who was a major influence. Rivera achieved considerable success as a Cubist painter, but eventually changed his style to a modernist form of figurative painting inspired by the Mexican Revolution of 1914-15, and the Russian Revolution of 1917. He joined the communist party but was constantly at odds with its leaders. In the 1920s, Rivera began to produce elaborate compositions with a socialist message. A series of vast, stunning murals in public buildings in Mexico in 1921, secured his fame.

By now the stuff of legend, the life of the Mexico City-born Kahlo was fraught with turbulence and suffering. In 1925, she sustained severe injuries in a bus accident that permanently scarred her, and caused extreme pain throughout her life. She pursued painting during her convalescence, and sought Rivera’s advice toward that aim. Soon after meeting, the politically like-minded pair began a romantic relationship, and married in 1929. Rivera’s third wife and twenty years his junior, Kahlo struggled for her own artistic identity in Rivera’s shadow. All along, he encouraged the artistic ambitions of the budding young artist, and promoted her talent to anyone who would listen. Thus, the two embarked on a tumultuous yet highly fruitful personal and artistic exchange in their subsequent years together.

In 1931, following successful mural commissions in San Francisco, the Detroit Institute of Arts, under the auspices of Henry Ford and his son Edsel, invited Rivera to come to Detroit to create a mural cycle in the museum. It was a heady time for the pair, as they were wined and dined in the Motor City by their mega-rich hosts. The Fords looked to Rivera to burnish the image of the Ford family, increasingly under fire in the early years of the Great Depression. Rivera accepted the commission as an opportunity to infiltrate the capitalist locus of the U.S. automotive industry with images that conveyed his socialist beliefs. It was a contradictory yet productive clash of values that resulted in some great works of art. Kahlo, too, despite suffering a miscarriage, and ideological disputes with Rivera over the Fords’ patronage, managed to blossom as an artist, producing five paintings in Detroit which proved to be seminal works in her career.

Recently, I spoke on the phone with Mark Rosenthal to discuss these contradictions and conundrums, as well as the extraordinary significance of presenting “Diego Rivera & Frida Kahlo in Detroit” at this time.

David Ebony: What are your thoughts about the exhibition, “Diego Rivera and Frida Kahlo in Detroit,” and how did it turn out compared to what you had in mind?

Mark Rosenthal: Of course, I’m proud of it and the way it came out. In recent years, there have been seemingly hundreds of exhibitions centered on Frida, but far less attention paid to Diego. And there has never been an intense focus on their one-year stay in Detroit. It was a year in which they responded to each other in their works, exchanging ideas about each other’s lives and thoughts. Many scholars in the field, however, have long acknowledged the importance of that year, including Hilda Trujillo, the director of the Casa Azul [Kahlo’s childhood home and now the site of the Museo Frida Kahlo], when I was in Mexico doing research for the exhibition.

Rosenthal: The large studies Diego did for the Detroit murals are just too fragile to travel; and the show simply could not be done in any other place.

Ebony: What attracted you to the project?

Rosenthal: The interest for me was in Rivera. I thought about how his work had been overshadowed by Kahlo’s in recent years. To my mind, Frida had become overly popular. And Diego had been sidelined in some ways. Now, of course, after working on this show, I am in love with her again.

Ebony: In your essay for the book, you write about how Rivera and Edsel Ford had totally separate political agendas in mind for the Detroit mural commission. Edsel, Henry Ford’s son, wanted to enhance the Ford family’s image, while Rivera aimed to introduce a communist message into this capitalist milieu.

Rosenthal: Rivera and the Fords found that they could break bread together, see how things could be advanced, and not be bothered by the inherent contradictions in their beliefs and goals. They were being practical about the relationship. The Rockefellers were trying to do the same thing when they commissioned Rivera to do a mural for Rockefeller Center in 1932, which was eventually destroyed.

Ebony: It seems incredible today that Rivera, as a communist, seemed to have deep admiration for Henry Ford, and spoke about him in glowing terms.

Rosenthal: Henry Ford was greatly admired in Russia at the time. Rivera had spent a year [1927-28] in Russia, where a translation of Henry Ford’s autobiography had just been published. The socialists thought that Ford was interested in the workers’ well being, and believed that his concepts of industrialization held great promise for workers. It was the age of social engineering, and many thought that Ford made the work of the Socialist state possible. Rivera recalled in his own autobiography seeing portraits of Marx, Lenin, and Henry Ford hanging side by side in a Russian worker’s home.

Ebony: Rivera and Kahlo arrived in Detroit in April, 1932, following a workers’ protest march; there were hunger strikes, and general discontent throughout the city.

Rosenthal: Yes, and oddly, they never said a word about it. You wonder if Diego did not want to bite the hand that was feeding him. It certainly wasn’t that he was unaware of the situation. Later, after he left the city, and there was growing controversy about his Detroit Institute of Arts murals, he called the entire episode the “Battle of Detroit,” which has the same militaristic ring to it as the hunger march and the funeral march there.

He had sent an advance man to prepare for their arrival, to look for an apartment that would be big enough for Frida to paint in. At the time, Diego expressed that he would be in Detroit in time for the march and protest, but then things kept coming up that delayed them, including a commission for opera sets in Philadelphia, and other excuses, such as he was sick, and was held up in New York.

Rivera was full of contradictions. Frida had said that about him. He was thrown out of the communist party in 1929 for his duplicitous relationships with his millionaire patrons. And he felt that the Mexican communist party was becoming too Stalinist and bureaucratic. He spent the rest of his life trying desperately to get back in the Communist Party, which he did just a year or two before his death.

Ebony: Was Rivera’s political stance a factor in the general fall from favor of his work by the 1940s, and later?

Rosenthal: There was a shift in the culture. For Rivera, a political statement was paramount in his work. But by the mid 1940s through the ’50s, there was a general movement against political art; most political art came to be viewed as contemptible. One of the things I’m stuck by today is how much political art is around us all the time now. Artists like Kara Walker, William Kentridge, and many others are in the forefront. And, of course, Frida’s star was ascendant as a precursor of the women’s movement and feminist art.

Ebony: Kahlo always seemed assured of her importance as an artist. You mention in the book her famous comment to the press soon after she arrived in Detroit, saying, “I am the greatest artist,” while Diego was in the spotlight.

Roesenthal: I think she was hilariously provocative. Kahlo had a premonition. The Surrealist movement was so important to her. It allowed her to evolve. Before her exposure to the Surrealists, and being recognized by André Breton, among others, she was a rather conservative artist, painting mostly portraits of her family and friends. Diego was always engaged in a different form of modernism.

Ebony: Could you comment on the importance of this exhibition in Detroit at this moment?

Rosenthal: This is a moment when, as Mark Twain said, “History doesn’t repeat itself, it rhymes.” When Diego and Frida arrived in Detroit, the Institute of Arts was in dire straights. Its budget had been reduced from $140,000 to $40,000 per year, and was in danger of being cut some more. And there was talk of closing the museum and selling off the collection. It was a situation very similar to the one in recent years. But Rivera’s Detroit Industry murals proved to be immensely popular. There was a surge in attendance soon after their completion, the museum’s budget was increased, and there was no further talk of closing the museum.

There are obvious parallels to recent times. “Diego Rivera and Frida Kahlo in Detroit” is the first major exhibition at the museum since the “grand bargain” was struck early this year. Over $800 million has now been raised from corporate and private donors to save the museum, separate it from city control, and prevent any further talk of closing it and selling off the collection. The museum can no longer be used as a political football. This is a big drawing point for the exhibition. Attendance has been fabulous. The Rivera murals are, after all, part of the consciousness of the citizens of Detroit. And the exhibition has come to be viewed as an amazing, soul-searching event. 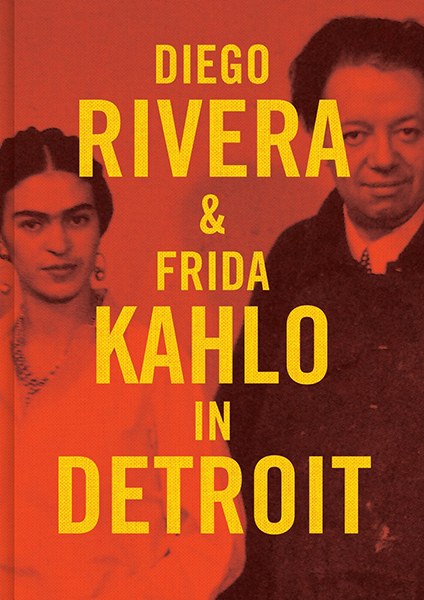