You can't Shut Me Up by Jennifer Moo

An old friend once told me that being a decent person means having a guilty conscience. And there was enough to feel guilty about as 2015 unfolded. Ethical uncertainty over how a liberal society should deal with the intolerant has become strikingly evident following the murders of four French Jews in a kosher grocery and twelve editors and staff members of Charlie Hebdo, a satirical magazine located in Paris, by partisans of al-Qaeda and, its rival, ISIS.  Fear of blaming the victim and perhaps providing support to Israel has led some very decent people to minimize a burgeoning European anti-Semitism and the allure of Islamic fanaticism. Given the terror and bloodshed produced throughout the region by Israel and the United States, many are concerned about the use of a double standard in discussing terrorism. Also, if satirizing Mohammed the Prophet is permitted, it is difficult to understand why the same behavior is deemed criminal when applied to the Holocaust. Charlie Hebdo may have been critical of religion as such, yet its staff targeted Islam more frequently than other faiths. They did not take the possibly dire consequences of their blasphemous provocations seriously enough. Instead they blithely assumed the universal “right” to free speech that, in fact, many states deny in principle and even liberal states never fully translate into practice. Only an assault on the double standard coupled with Western states translating the rule of law into practice can turn back the rising tide of intolerance.

This argument is logical and its concerns are legitimate. But there is also a problem: fanatics have no interest in rejecting the double standard, embracing international law, or promoting progressive causes. If a double standard allows defamation of Allah or the Prophet but not the Holocaust, moreover, then (an impartial system must) either permit both or—more ominously—prohibit both. Unfortunately, however, the true believer rejects both options: he should be able to criticize what he likes while censoring what he wishes. So far as progressive politics is concerned, moreover, Islamic terrorists provide what Communists liked to call an “objective apology” for unyielding supporters of Israel and those preparing for the final “clash of civilizations.” Islamic fanatics have created fear among ordinary citizens that is grist for the mill of anti-immigrant xenophobes and bigots. Old stereotypes of the Arab are strengthened, along with the still popular identification of Islam with barbarism. Perhaps that was the extremist purpose all along. Whatever their intentions, the terrorists received support from organizations that had slaughtered more moderate co-religionists, sold women into slavery, and beheaded journalists. Just this week ISIS threatened to behead two Japanese hostages (unless their government hands over $200,000,000) and executed two men “convicted” of being gay by throwing them off a roof. In short, abolishing the double standard and accepting the rule of law is not a one-way street. The demand cuts both ways.

Islamic fanaticism soils the faith and threatens the interests of the Muslim community. The majority of its members know this. It is probably why so many penetrating criticisms of al-Qaeda and ISIS originated among those with a more humane understanding of Islam and the words of the Prophet. Of course, there were Parisian neighborhoods in which Arabs and Muslims were fearful of joining the march. But the majority condemned the terrorists. They chose a different path in keeping with the peaceful mass demonstrations against right-wing cartoonists and magazines that lampooned Islam and the Prophet in Denmark. The Arab-Muslim community understood that maintaining their dignity and that of their faith called for extending sympathy to the victims of terror, joining the mass demonstrations in Paris and elsewhere, while chanting “Je Suis Charlie.”

Armchair politicos like to claim that such public actions are nothing more than spectacles and that they don’t deal with the “real” issues. But then participating in public protest and investigating the “real” issues are not mutually exclusive endeavors. Public action can actually generate support for policies and turn issues into symbols. That is especially true in France where citizens recall the huge mass demonstrations of July 14, 1936 that inaugurated the anti-fascist Popular Front.  In any event, critics of “Je Suis Charlie” have been notably remiss in suggesting alternative ways for the great mass of citizens to express their grief and solidarity with the victims. It has been suggested that “Je Suis Charlie” was only a mask for anti-Islamic and anti-Arab sentiments.  But the organizers explicitly excluded anti-immigrant and neo-fascist parties from participating, made fervent pleas for the protection of civil liberties, and championed solidarity among diverse religious and political leaders as well as everyday citizens. New calls have subsequently been heard for targeted employment and educational programs and better integration of Arabs into civil society.

The masses had fought long and hard for the right to free speech and public assembly: no less than white Europeans, the majority of Arabs and Muslims want and deserve to be heard. Historical experience teaches that their hopes for a better future rest upon the liberal rule of law and the ability to exercise their civil liberties rather than medieval caliphates ruled by emirs according to an interpretation of Sharia law that condemns art, music, free expression, and non-Koranic education. Religious institutions have always treated free speech as a danger to public morals and an affront to the faith. Whether Charlie’s cartoons were in bad taste, or whether the magazine satirized the Mosque more than the Church, is irrelevant. Freedom of speech involves testing limits and Charlie has the right to choose its targets without asking permission. In a liberal society, writers and artists are not required to be “even-handed” let alone produce what a specific audience wants to read or view.

Freedom of speech does not stop at the doorstep of offended religious or ethnic sensibilities. That most states deny citizens the right to free speech is regrettable. But then rights have never been empirically justifiable and liberal values have generally been on the defensive. The Church, the Synagogue and the Mosque are institutions that express private interests and opinions. They should have no more say in determining public life than the chamber of commerce or some union.  The extent to which they do is the extent to which tyranny reigns. Worse: it is the extent to which intolerance is turned into a virtue.

Government action will prove necessary to protect all citizens from an assortment of terrorist organizations, but it will also need to protect civil liberties. Opposing terror with counter-terror inevitably will lead to introducing authoritarian forms of the “national security state.” Such plans would have democracy defined by what it should oppose. Representatives from minority communities should participate fully in formulating the necessary programs and transparency will prove essential for holding those in control responsible. Fashionable analogies of the strife-ridden present with Europe in the aftermath of World War I are misplaced and historically inappropriate. But there should be no misunderstanding: the current crisis has been generated not by those who criticize the limits of liberal society but rather those who deny it tout court. Tolerating intolerance presents both a threat and a challenge: navigating the two successfully is the precondition for securing the future of liberal society.

Stephen Eric Bronner is Distinguished Professor of Political Science at Rutgers University and Senior Editor of Logos: A Journal of Modern Society and Culture. 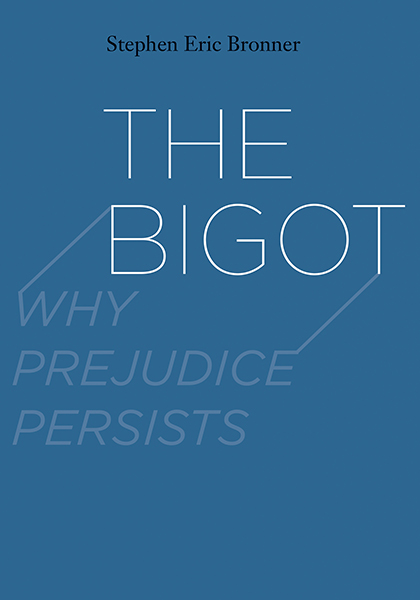