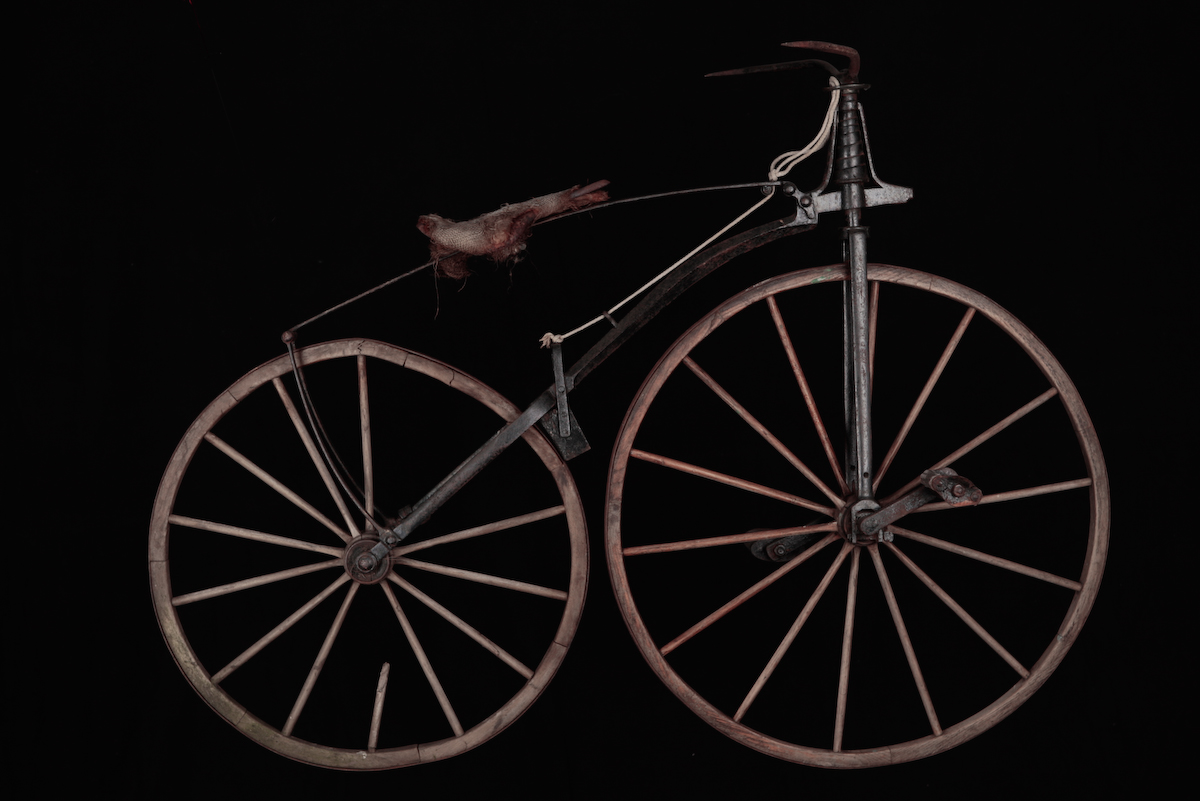 Many of us here at Yale University Press are avid cyclists. In honor of May being National Bike Month, historian and bicycle expert David V. Herlihy takes a look at America’s first cycling champion.

The bicycle industry, launched in Paris, was not as yet three years old. And the bicycles in use were still the first-generation “boneshakers” A typical specimen weighed about seventy pounds, with its solid iron frame and wooden carriage wheels, the front one having cranks and pedals attached to the hub. Only the best models featured solid rubber tires to cushion the ride. The first major road race, between Paris and Rouen, had taken place only three months prior.

And yet, until now, almost nothing was known about the American teenager who won the race other than his name, which had been handed down to posterity as Rynner Van Heste. Surprised by the dearth of information about this early champion, I resolved to piece together a profile.

At first, however, I was stumped. I could find no trace of Van Heste, despite the fact that he evidently came from a prominent family, given his foreign residence and the prohibitive cost of a velocipede at the time.

But then I recalled that, some fifteen years ago, I was present at the annual auction of bicycles and cycling ephemera, held in Copake, New York, when the original winner’s certificate came up for sale. I tracked down the purchaser, who graciously produced it for my inspection. I quickly realized that the name in beautiful cursive was not Rynner Van Heste, after all, but rather Rynier Van Nest.

Suddenly, I had a trail.  Rynier was born in New York City on July 26, 1854 (he was thus only fifteen and a half at the date of the race), some two years after his older brother George Willett. Their father, Abraham Rynier Van Nest,, Jr, was a Protestant minister who came from a distinguished Dutch American family (the Van Nest neighborhood of the Bronx is named after a relative).

In 1863, in the midst of our Civil War, the four Van Nests moved to Paris, where Abraham presided over the American Chapel. He soon began to divide his time with another American church in Rome, before settling in Florence in 1866 to run the American Unity Church.

Conceivably, the elder Van Nest might have encountered a bicycle prototype in Paris, shortly after his arrival, when the pioneer maker Michaux began to experiment with the two wheeler. Or perhaps Van Nest became aware of the novelty in 1867, when the press first began to take note of the curious vehicle during the Universal Exhibition and a veritable industry was underway.

In any event, Van Nest was aware of the vehicle by the fall of 1868, when the primitive bicycle was already captivating the Florentine public, especially wealthy young men, such as the ones who would soon form the Veloce-Club, the organization that would host the Firenze-Pistoia.

On October 23, 1868, Van Nest penned a letter to Michaux, complaining that he had yet to receive the velocipede he had ordered in person three weeks prior. Presumably, the bicycle was eventually delivered to the Van Nest residence at 40 Via Montebello, and it would be the one that young Rynier would ride to victory during the Firenze-Pistoia (the winning vehicle was reportedly a Michaux).

Conceivably, Van Nest Senior might have relegated his bicycle to his sons, after it failed to meet his expectations. Or perhaps he had one or both of his sons in mind all along when he placed that order with Michaux. In any event, the youngest Van Nest became quite proficient with his bicycle in the year 1869. Florence’s daily La Nazione reported that the young American was well known to midday frequenters of the cascine (Florence’s main park), where he displayed extraordinary skills managing his velocipede.

The local newspapers would describe the aura of excitement that surrounded the old city gate as some twenty brave contestants gathered on that frigid and foggy winter morning, including a few foreigners. They dragged their velocipedes through the immense crowd to assume their starting positions. So narrow was the road, they had to line up in four rows. Those whose feet could not reach the ground had to be propped up by volunteers. Meanwhile, two women scurried about offering the competitors hot cups of coffee.

Although Rynier was a good ten years younger than his competitors, he was widely considered by knowledgeable sources one of the favorites. La Nazione would describe him as “pale and skinny, but fast and laid back.” Another contemporary paid tribute to him in verse: “Your face is like a maiden’s, so no one will know, that you’re a little wolf dressed out in Petticoat.”

At precisely nine a.m., the trumpet sounded and the racers were off, raising clouds of dust and hearty cheers. A few carriages and horsemen managed to elude the police and chase after the riders. Others sprinted to the train station to catch the next locomotive to Pistoia, hoping to arrive in time to view the finish. Spectators lined the entire route, some perched on walls and trees.

La Nazione described the dramatic arrival in Pistoia, about two hours later: “Suddenly a few cried, ‘Ecco lo, Ecco lo!’ [There he is!] Soon everyone could see from afar, just above an ocean of heads, a cap sporting the badge of the Veloce Club. It was Mr. Rynner Van Hest, a young American. He advanced rather slowly, and appeared tuckered out, but no one else was in sight. A uniform and sustained applause broke out. The throng was stunned to see a young man—he appeared to be no more than fifteen or sixteen—win such a long race.”

It was indeed an impressive performance by the American prodigy. He had taken an early lead and never relinquished it. He would finish three minutes ahead of his nearest rival, a Belgian.

How much longer Rynier rode his velocipede is not known. Like many of his peers in the Veloce Club, he may have lost interest in the primitive bicycle shortly thereafter, by which time its novelty had worn off and its severe deficiencies could no longer be overlooked.

By the late 1870s, Rynier had moved to Philadelphia, where he attended medical school at the University of Pennsylvania. By that time, the new “English Bicycle” (the high-wheeler) was in vogue among his demographic. The high bicycle sported numerous improvements such as tubular frames, ball bearings, and wire wheels. Experienced riders, willing to risk an occasional fall, could easily cover  twenty miles, in little more than half the time it had taken Rynier to reach Pistoia.

Whether Rynier rode the new bicycle is not known. One surviving document, however, suggests that he had at least retained the same progressive spirit and love of the outdoors that, presumably, had originally attracted him to the sport of cycling. In his thesis on “Asylums,” or institutions for the mentally ill, Rynier deplored the rampant overcrowding and abuse of patients and insisted that facilities should be located in the countryside so that patients could benefit from its pure air.

Scattered records affirm that Rynier remained close to his family, and never started one of his own. After completing medical school, he settled in New York City where he practiced medicine, leading a privileged but low-keyed life. He died in 1931. A massive, but simple, tombstone marks the spot in Brooklyn’s leafy Green-wood cemetery where he now rests with his family.

The author has recently proposed that a plaque be installed on the façade of the former Van Nest residence in Florence (now the Hotel Magenta). Ideally, that deserving tribune will be dedicated by February 2, 2020—the 150th anniversary of the original Firenze-Pistoia.

When Tuscany hosted the UCI World Cycling Championships in the fall of 2013, organizers made a point of holding time trials that (roughly) retraced the original route. The global spotlight on Italian cycling also prompted Paolo Ciampi, a Florentine journalist, to pen a booklet about the inaugural contest, entitled La Prima Corsa del Mondo (The World’s First Race).

David V. Herlihy is a historian and freelance writer. He has been interested in bicycle technology since his days as a member of the Harvard Cycling Club, and has researched extensively the invention and early development of the bicycle. His work has been featured on National Public Radio and Voice of America and in the New York Times, the Boston Globe, Boston Magazine, and Historic Preservation. In 1999 Herlihy received the McNair History Award from the Wheelmen, the preeminent American association of antique bicycle collectors.