To most of us owls are mysterious and elusive creatures of the night.  That they can freely operate in darkness that leaves us gripping a flashlight to make our way, contributes to their singular standing among birds.  Of course their broad feathered faces collect all available light to assist in their abililty to visually resolve shapes and movement that we would otherwise miss in darkness.  Some owls possess auditory canals that are positioned asymetrically on their skulls which assists them in locating their prey in spite of not actually “seeing” it.  The great gray owl for example can hear with such precision that it can plunge feet first to seize a vole it hears in its burrow beneath more than a foot of snow. 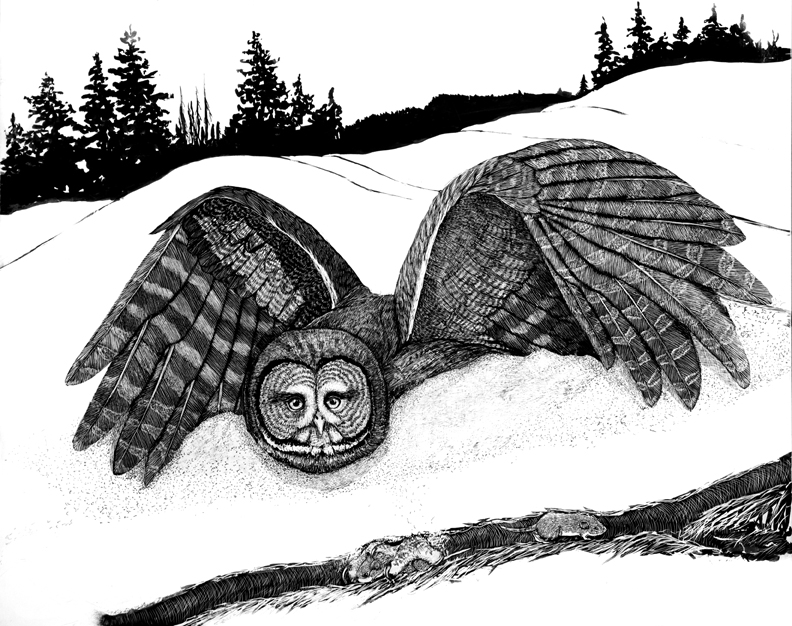 The act of “gifting” is a very important part of the western screech owl’s courtship.  Very early in the pair bonding process, the male owl presents his prospective mate with fresh prey he has captured.  It is initially offered some distance from the possible nesting cavity and then more frequently provided at the nest site itself as the male introduces his mate to the possible location to raise a family.  This gifting also demonstrates to the female that the male is a capable provider, something that is very important as once the egg laying begins, the female is completely dependent on her mate for sustenance.  Her brooding commitment typically keeps her on the nest until the young have hatched and are old enough to be left untended at which time both owls will hunt in order to feed the growing brood. 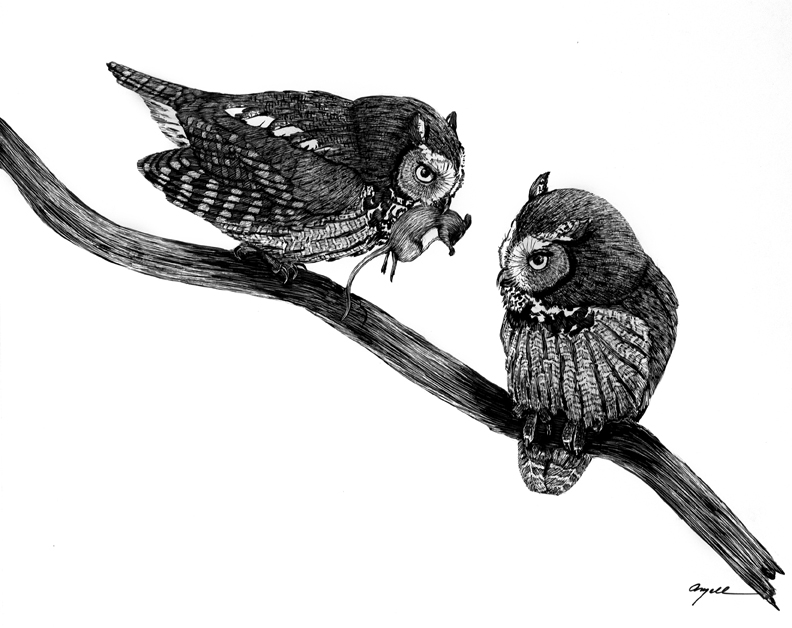 Some owls, including the long-eard and great horned owls, will employ a “broken wing” display in order to draw a potential threat away from their nest or recently fledged young.  Not unlike a shorebird that will feign injury, these adult owls will fly to the ground where they appear to drag an injured wing as they hop ahead of a person or animal percieved as a danger to their brood.  At such times the owls will also utter a high pitched “screech” suggesting the pain of an injured bird.  Having witnessed this behavior I must say it’s quite convincing until, after tracking the owl a bit, it suddenly takes off and flies out of sight. 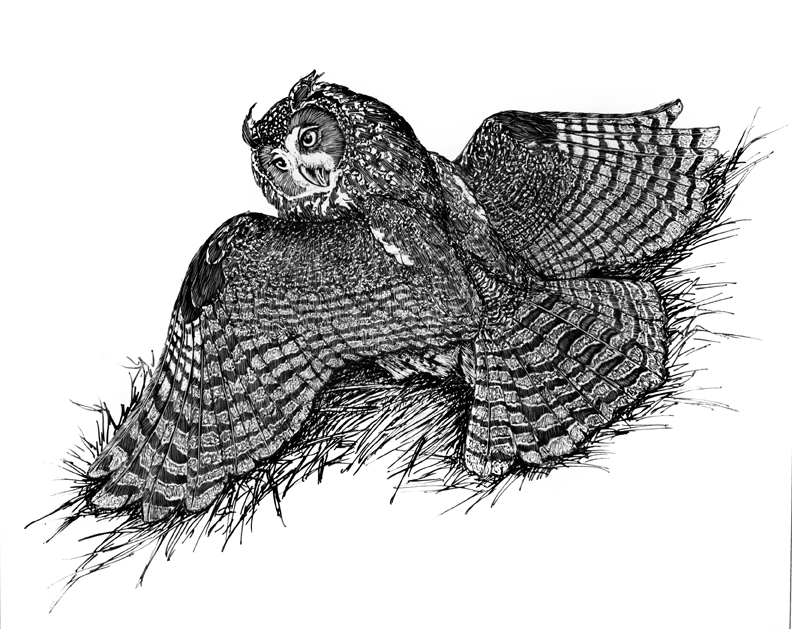 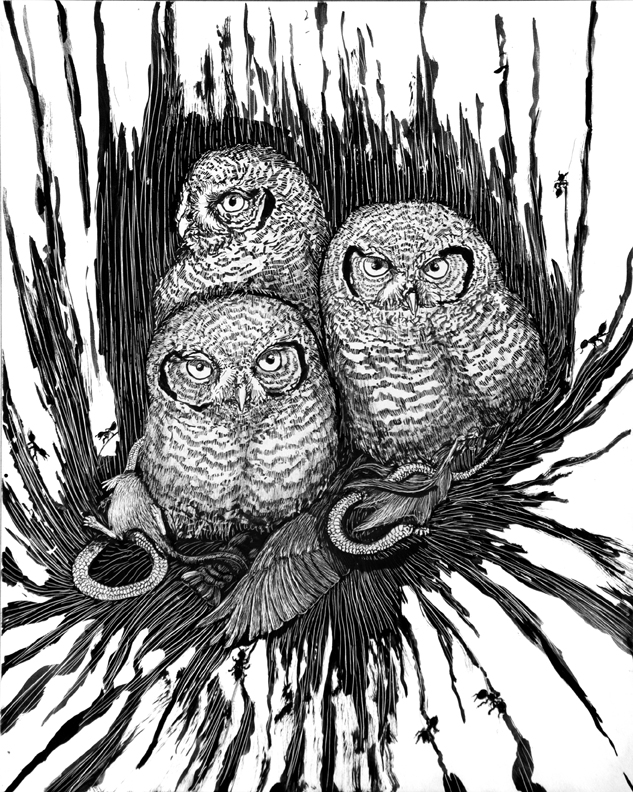 The eastern screech owl appears to have developed a fascinating symbiotic relationship with blind snakes.  Fred Gehlbach, an authority on this species, discovered live blind snakes in the nests of these owls.  The adults may bring the live snakes to the cavity or the snakes make their way into the nest on their own.  In any case the snakes thrive in the nest by consuming the maggots that emerge on the rotting food not eaten by the owls.  The snakes don’t harm the young but benefit the owls by performing something of a “clean up” service for the owl family. 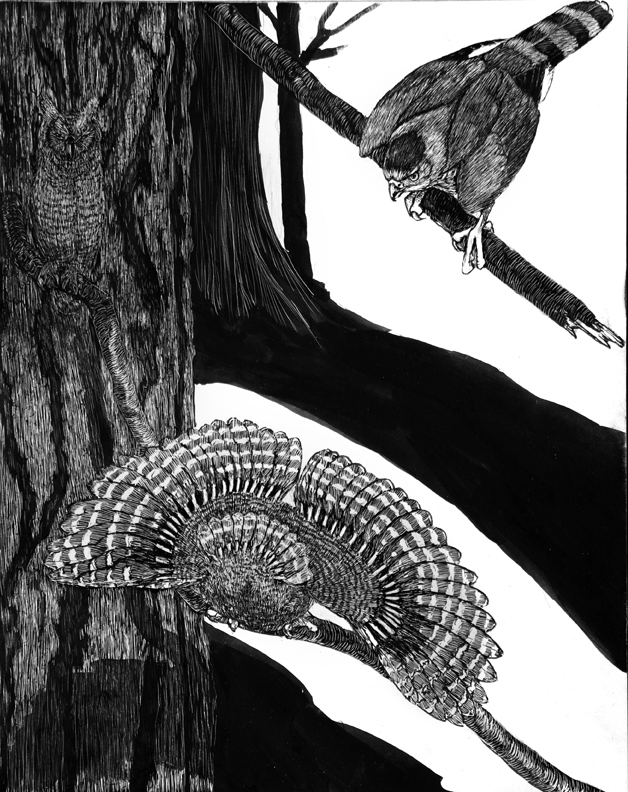 Owls have a number of “strategies” for keeping threats to their welfare at bay.  The classic owl display is to bend down to face its adversary and extend its wings forward and fully opened.  The owl immediately appears at least twice its size thereby giving the attacker second thoughts about proceeding.  The owl will also hiss and snap its bill emphasizing its ability to inflict a bite.  Should the attacker proceed the owl extends its long legs and taloned toes to provide a pain rendering barrier between itself and the threat.  Of course the classic strategy of the owl facing danger is to disappear.  They assume an upright posture usually with a background of foilage or tree trunk that matches its plumage.  Many times I’ve searched for roosting owls and failed to find them because of this ability to cryptically match their surroundings. 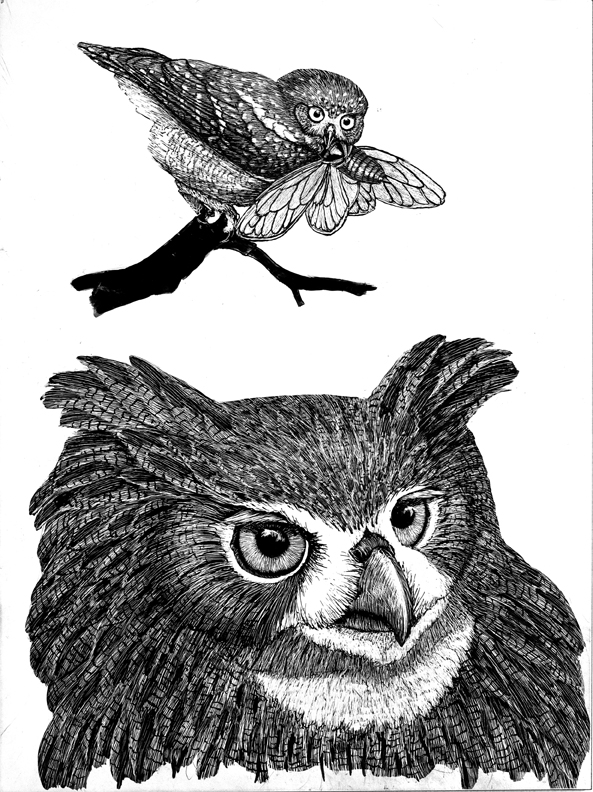 Owls have an unusual range in their sizes from the sparrow sized elf owl weighing little more than a hen’s egg, to the enormous Blakiston’s fishing owl which matches some eagles in size and weight.   This size diversity of the more than 217 species of owls worldwide allows them to occupy a rich range of habitats and the niches within them.  From ancient forests and arctic expanses to bleak desert plains and sodden marshlands, owls, depending on their size, can exploit the food and breeding resources therein.

Tony Angell is the author or illustrator of numerous books in the fields of art and natural history. He served as supervisor of environmental education for Washington state’s Department of Public Instruction for more than 30 years while also maintaining an award-winning career as a professional artist. He lives in Lake Forest Park, WA.