Predicted by Einstein’s Theory of General Relativity, black holes are the most enigmatic objects in the universe. They are so compact and their gravitational pull is so intense that not even light can escape from them. Well before physicists co-opted the term “black hole” to describe these dark, lurking oddities, the term referred to a physical place: the black hole of Calcutta, an infamous tiny prison where many trapped English and Anglo-Indian soldiers suffocated to death in 1756. Einstein’s Theory of General Relativity reformulated Newton’s conception of gravity by introducing the concept of space-time, the four-dimensional sheet that describes the universe. According to Einstein, mass causes space-time to curve, producing potholes in it, and these undulations dictate how mass moves in the universe. Every object in the cosmos with mass—for instance, the sun, a neutron star, galaxies—generates bumps in space-time, the severity of which depends on its mass and how densely it is packed. A neutron star, which is more compact than our sun, causes a bigger pothole. And a black hole is so dense that it causes a puncture in space-time!

Black holes are real astronomical objects that inhabit the centers of most galaxies, if not all. Our galaxy hosts one that is about four million times the mass of the sun. The presence of black holes is inferred from their gravitational influence on their neighborhood, by mapping the motion of gas and stars in their vicinity. Black holes feasting on the gas around them often appear as quasars, the brightest beacons that are visible out in the farthest reaches of the cosmos. Luckily for us, massive though it is, the black hole at the center of our galaxy has no oomph left to exert any influence on our solar system, which is about 30,000 light years away. It’s a dead black hole, one that is currently fasting and not gorging. How the first black holes formed and how they grow over cosmic time is one of the exciting, challenging, and open questions in cosmology today.

Due to the extreme warping of space-time, black holes exert a peculiar influence on time and the propagation of light in the universe. The edge of a black hole is defined by the event horizon, a point of no return from which nothing, not even light, can escape its gravitational grip. Approaching the event horizon, one would first encounter a region akin to Dante’s purgatory, where one could be trapped forever. This is because black holes disrupt the flow of time—the clocks of in-falling observers are slowed down compared to the clocks of distant observers. Additionally, light that travels along space-time gets dramatically deviated along its path, a phenomenon referred to as gravitational lensing that is produced by all objects that have mass, including black holes. The extreme deformation of the fabric of space-time around a black hole causes light that grazes nearby to be reflected bizarrely, producing a unique kind of shadow that skirts around the event horizon. The ongoing Event Horizon Telescope project is hoping to image this shadow around the black hole at the center of our Galaxy in radio wavelengths, using radio telescopes scattered around the Earth in Mexico, Chile, and Germany. By combining the data to create a large baseline and thereby reach the required sensitivity, this collaboration of astronomers hopes to verify the properties of the black hole at the center of the Milky Way.

Priyamvada Natarajan is Professor in the Departments of Astronomy and Physics at Yale University. A theoretical astrophysicist, Natarajan’s research work focuses on mapping dark matter with gravitational lensing techniques and on understanding the assembly history of black holes over cosmic time. In addition to her forthcoming book, she writes for the New York Review of Books. 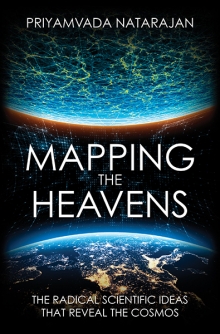