Three years ago, the digerati were abuzz about the idea of a “real” virtual currency. That turned out not to be the killer app. We still face the full disintermediation of the finance industry, but it’s being driven not by digital currencies but by digital wallets.

What’s the difference? A digital currency such as Bitcoin is a system for exchanging value between people. The only thing unique about it is that, unlike physical money, it lives entirely in the world of databases. That turned out to be not so unique, though. Who pays with physical money anymore?

A digital wallet is more than a system of for exchanging value; it is an entire universe of such systems. It is a system of exchange systems. A digital wallet can have Bitcoins, yes. But it can have reward program points too, and Dollars, and whatever other virtual tchotchkes people might use to trade with one another.

How does it work? You’re at the store, wanting to buy a candy bar. You have a digital wallet app, you open it, it lists a bunch of monies. The app talks to the cash register. The two machines verify that the other is legit. The cash register says to your app “The candy bar costs 2 Dollars, or 1.5 Euros, or 150 Yen, or 120 CVS points, or 150 American Airlines Frequent Flyer Miles, or 18 Silver Coins from World of Warcraft.” Your app shows which of your currencies can buy the candy bar and lets you pick one. You tap the money and the exchange happens. The cash register tells the store’s security system that you are allowed to leave with the candy bar. And off you go.

A digital currency competes with other currencies. The rise and fall of Bitcoin and similar monies will have an effect, eventually, on the health of the Dollar, the Euro, and the Yen. Is that big stuff? Yes, until you consider the jungle in which digital wallets compete. A digital wallet is a comprehensive system of value exchange. It competes not with other monies, but with other exchange systems. At the moment, we have only one such system, the global system of international finance. It regulates all trade among human beings, through its network of banks and governments. Anything that competes with global finance is big news indeed.

How strong is this competition? Think about it. A digital wallet system can do everything payment-wise that a system of banks and governments can do, instantly and for free. It can transfer value among different currencies and it can generate new money. And a digital wallet can do lots of things that the existing system can’t. It can tie money to causes and sources, carrying all kinds of information along with it. “This dollar was once donated to Panda Relief Worldwide.”

What about security? Surely digital wallets are not as safe as government-run monies and the big, important banks that handle all of our dealing. Digital wallets don’t have bureaus, agencies, offices, and police. That’s true, but they have one thing that banks and governments don’t: a block chain. Block chains are infinite sequences of computationally intense problems. A computer either has the solution or faces a 3,000,000-year task to find it. The solution is like a key. Two computers who possess the same key can verify that fact instantly and costlessly, and the possession of the keys verifies their legitimacy to each other. The cash register knows it is talking to your smartphone, not some imposter. Your smartphone knows this too. And your smartphone is also able to convince other smartphones and broader systems, such as the Bitcoin system or rewards points systems or whomever, that she is truly your phone. The same system that verifies identity also verifies amounts held and amounts paid. No humans are involved. Today’s computer systems can do reliable, costless, instant, distant, anonymous verification of transactions.

Where did block chains come from? Bitcoin. The person or people who created Bitcoin also created block chain verification and while the currency itself has not caught on, the verification idea certainly has. Digital wallets are being launched all over the place, by big companies such as Amazon and Apple, but also by dozens of revolutionary-minded intellectual cells. The Bitcoin protocol is being used to verify other things, such as signatures and contracts. The big thing with Bitcoin, it turned out, was not the money but the platform for the money.

What does it mean and where is it going? The world of finance will change. There will be a collapse in demand for human verification of transactions. Crime will still be abundant—nothing about block chains prevents someone from grabbing a purse or persuading a senior citizen to give money away. But when we go to spend our money, ill-gotten or not, nobody will be watching. Nobody human, anyway. It’s The Machine. The Machine which always watches and never blinks.

Edward Castronova is professor of media and cognitive science at Indiana University. His previous publications include Synthetic Worlds and Exodus to the Virtual World. He lives in Bloomington, IN. 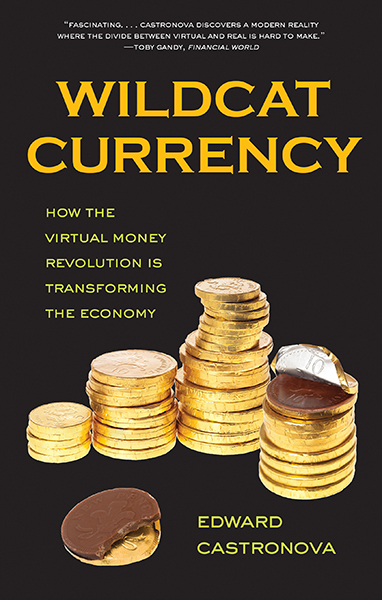