An August 2012 edition of The New Yorker magazine adopted an unseasonal topic for its front cover: Santa Claus. In the illustration, Santa is slumped on the ground against a striped pole, cheeks flushed, under the yellow orb of a bright sun. In place of a cheerful grin, his expression is one of dismay, surprise, or perhaps exhaustion. His fairytale frozen homeland has been reduced to a small iceberg in a sea of blue. There is little room for the elves to work or the reindeer to eat here. Santa is marooned.

The magazine cover conveys a powerful message of environmental changes that are ongoing today. The centrally placed sun evokes a warmer, climate-changed world. The isolated iceberg captures a landscape fundamentally altered by that sun. The figure of Santa Claus strikes a note of familiarity, yet his slouched stance and sad expression suggest that something is amiss. At the same time, the presence of this figure from western folklore alludes to ongoing questions among many members of the North American public about whether these environmental changes are in fact real, or, like Santa, just a myth. Despite an assembled body of conclusive scientific evidence, climate change continues to arouse skepticism and elude comprehension.

Much of the debate around climate change centers on the science. It is scientists to whom we turn to answer the fundamental questions of detection, attribution, and mitigation: Is the warming that we see today significantly different from the patterns of variability that characterize the global climate? Can we attribute that warming to anthropogenic causes? What technical advances could be called upon to mitigate this warming? Yet as The New Yorker cover implies, climate change is not just about scientific questions of hotter temperatures or melting ice. It is about stories and images, myth and reality, knowledge and ignorance, humor and tragedy—questions that are, at root, cultural in nature. To understand these complex dimensions, we have to look beyond the natural sciences and to a social science discipline that has not received much attention within climate change discussions to date: anthropology.

Anthropological perspectives on climate change are shaped by the fieldwork methodology that in many ways defines anthropology as a discipline. Anthropologists typically conduct research over extended periods of time in a single community or set of communities, gaining a window into the everyday interactions between people and their environments. Through this kind of work, anthropologists have brought to light some of the ways in which different communities, from native groups in the Arctic to islanders in the Pacific and farmers in the Andes, observe changes in their weather, climate, and landscapes and respond to these changes. These detailed, on-the-ground insights are a valuable contribution to a debate that is often dominated by discussions of global atmospheric processes and international policy negotiations.

But anthropology is no longer restricted to providing a local perspective on a global issue. Over recent decades anthropology’s remit has expanded beyond its traditional focus on isolated communities to include studies of global movements of people, objects, and ideas, and research settings in developed countries and institutional centers of power. Thus a number of anthropologists have brought a similar fieldwork approach to studies of climate science itself, asking, in essence, how we know what we know about climate change. The aim of this research, conducted through observation at scientific meetings and interviews with scientists, is not to undermine the value of scientific knowledge, but rather to seek insights into how science is produced within particular social, political, economic, and cultural contexts—contexts that influence the research questions asked, the methods selected to answer those questions, and, ultimately, the results generated.

A second major type of contribution stems from anthropology’s long interest in society-environment interactions. A central focus of work within archaeology and environmental anthropology has been on understanding more about how societies both shape and are shaped by the changing environments in which they live. This scholarship reveals that although the anthropogenic forcing of global climate through greenhouse gas emissions over the last century is unprecedented, many of the questions it raises have their roots in much older discussions. From the time of Hippocrates and before, prominent thinkers have asked questions about the degree to which climates determine societal characteristics, and have pondered the limits to human agency in its ability to manage the environment. For millennia, decision-makers have had to look to both the past and the future to understand the challenges of environmental management. This historical perspective provides a useful reminder that environments have never been static and that people have always impacted their environments and, in turn, had to respond to the impacts of environmental changes.

A third main area of anthropological contribution is its broad, holistic view of society-environment relations, which draws attention to the fact that the new forms of production and consumption driving contemporary climate change are also altering people’s livelihood strategies, modes of interaction, and spatial and temporal horizons. Climate change is hence accompanied everywhere by other kinds of changes within society. While climate is sometimes the dominant factor that drives change, just as often it is outweighed by other factors. In some places people are talking and worrying about climate change, but in many places they are not. Anthropological research illuminates the difficulty of unraveling climate change from the complex web of social and material relations that mediate people’s interactions with their environments.

At a time of mounting opposition to action on climate change, as international negotiations flounder and climate skeptics capture the attention of the public, there is an opening for greater voice from the social sciences. Anthropology can play a central role in understanding the nexus of nature, culture, science, politics, and belief that constitutes this vital challenge. While climate science is obviously central, we should not forget Santa.

Jessica Barnes is assistant professor, Department of Geography and Environment and Sustainability Program, University of South Carolina. She lives in Columbia, SC. Michael Dove is Margaret K. Musser Professor of Social Ecology and Professor of Anthropology at Yale University. He lives in Killingworth, CT. 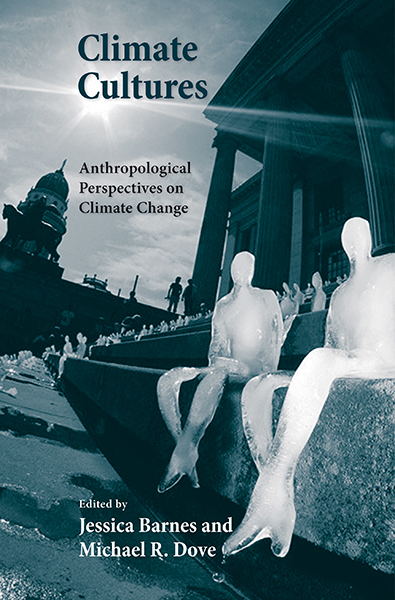